London: The Qantas pilot of the first special flight carrying Australians home from the UK has described the "peculiar" experience of flying in near-empty skies. 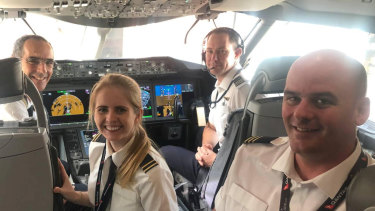 "I saw around 10 aircraft during the entire flight so that was a very peculiar scenario but it was nice to play our part in repatriating Australians that needed to get home," he said.

Qantas agreed to the government's request to put on four flights between London and Australia, after grounding its international fleet because of the travel bans imposed on Australians, like those of many countries around the world.

The flights have been aggressively promoted by the High Commission in the UK, reaching more than 1 million social media users and all four flights have already been booked out.

High commissioner George Brandis said Qantas had stepped up in the national interest. 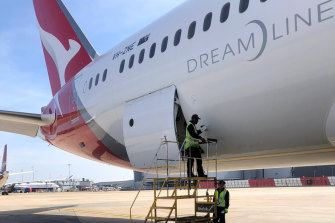 Protective equipment for medical staff, including masks and gloves, has been flown from Europe to Australia on a special Qantas fight from London.

"'Skippy' the Qantas 787 has made it home to Australia with a planeload of Australians and medical supplies," he said.

"We extend our sincere thanks to the Qantas crew led by Captain Michael King."

The travel bans imposed by numerous governments as a result of the coronavirus pandemic have caused airlines around the world to ground their fleets or drastically scale back flights.

This has caused a major headache for governments that are facing increasing demands by their citizens trapped abroad for help in getting home.

Younger Australians on working holiday visas in the UK are considered at particular risk, as they tend to be employed in the hospitality or education sectors, both of which have been shut down until at least May 7.

They are also more likely to live in shared accommodation, leaving them financially vulnerable if they or other members of the household are suddenly without a job and incapable of paying rent.

Unlike Australia, the UK maintains open borders and has not told backpackers to go home.

By contrast, Prime Minister Scott Morrison has urged foreigners with no job to make their way home and shut the door to all overseas visitors indefinitely.

Thousands of Britons stuck in Australia have not had any special flights arranged and are being told to book on Qatar Airways flights.