Emmanuel Macron hints that China has covered up its coronavirus crisis, saying: ‘It would be naive to say they’ve been better at handling this – there are things we don’t know about’

French President Emmanuel Macron has said there are ‘things that we don’t know about’ in China’s handling of the coronavirus crisis, joining a growing chorus of doubts about the accuracy of China’s claims.

Macron said in an interview published in today’s Financial Times that China’s figures could not be compared to those in free countries.

‘Given these differences, the choices made and what China is today, which I respect, let’s not be so naive as to say it’s been much better at handling this,’ he said.

‘We don’t know. There are clearly things that have happened that we don’t know about.’ 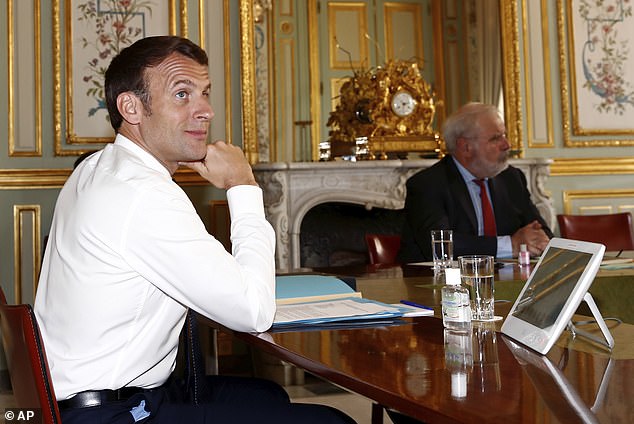 China’s official figures paint a picture of astonishing success in slowing the outbreak, but there has been widespread scepticism about their accuracy.

To add to the growing doubts, China this week revised the death toll in Wuhan upwards by more than 50 per cent.

In a social media post, the city government added 1,290 deaths to the tally in Wuhan, bringing the toll to 3,869.

Officials claimed that many fatal cases were ‘mistakenly reported’ or missed entirely.

The revision means that China’s total death toll has also increased sharply, because Wuhan was by far the hardest-hit city. The new figure is 4,632 rather than 3,342.

Macron said there could be no comparison between countries where the truth was suppressed and nations where information flowed freely and citizens could criticise their governments.

Frictions between China and France came to light earlier this week when the Chinese ambassador was summoned to the foreign ministry over a provocative article on the embassy website.

The article quoted an unnamed diplomat criticising the West’s response to the coronavirus outbreak.

The diplomat accused workers at nursing homes of ‘abandoning their posts overnight… and leaving their residents to die of hunger and disease’.

That comment sparked fury across the political spectrum in France, with people leaping to the defence of nursing home workers. 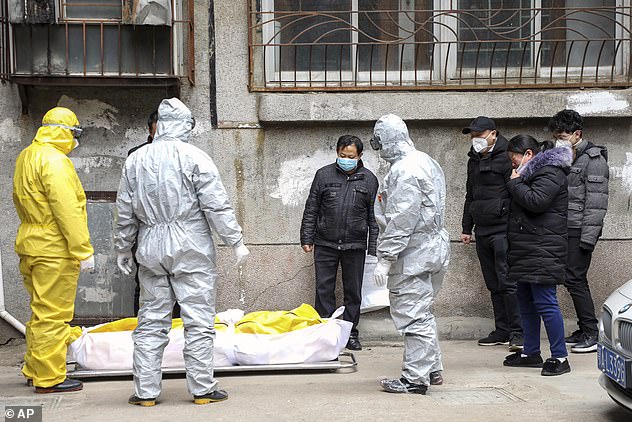 Medical staff in Wuhan are seen removing the body of a person suspected to have died from coronavirus. China has increased the death toll in Wuhan by more than 1,000

Foreign ministry officials summoned the Chinese ambassador in Paris over the article, which French lawmakers have called ‘fake news’.

China has since denied criticising France, saying there had been ‘misunderstandings’.

‘To the contrary, we share the concerns of France, which today faces the serious challenges brought by this epidemic.’

Britain and the United States have also declined to hail China’s apparent success in containing the outbreak.

UK Foreign Secretary Dominic Raab said today there would be ‘hard questions about how it came about and how it couldn’t have been stopped earlier’.

Donald Trump’s administration says it does not rule out that the virus could have come from a laboratory researching bats in China.

Trump says the US is ‘doing a very thorough investigation’ after hearing ‘more and more’ rumours of a laboratory accident.

Chinese scientists have said the virus was likely transmitted to humans late last year at a Wuhan ‘wet market’.

Trump also regards the World Health Organization as too close to China, accusing it of initially advising against travel bans out of ‘political correctness’.