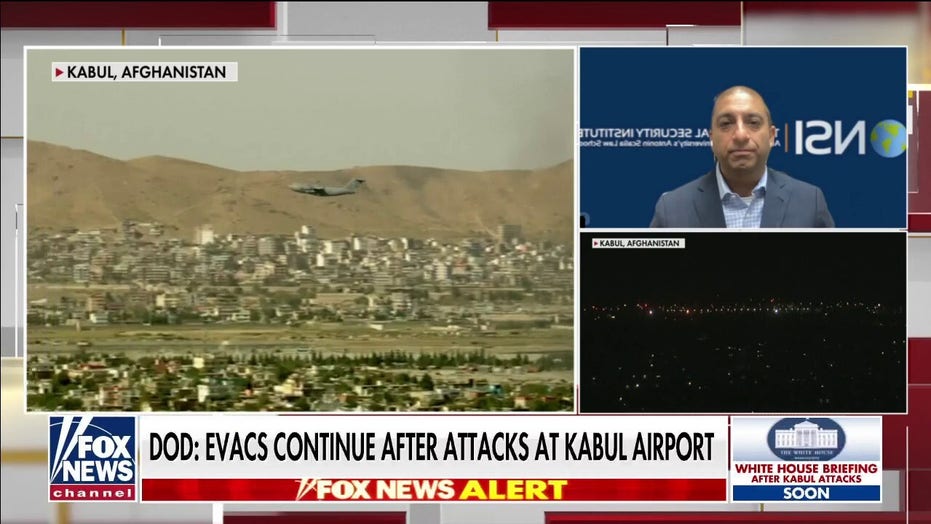 An Afghan mother with five of her children watched chaos unfold in Kabul Thursday as she waited for admittance into the airport near Abbey Gate as a suspected suicide bomber detonated an explosive device, killing at least 12 U.S. service members and dozens of Afghan civilians.

“She said there was an explosion and then she heard gunfire,” an American relative of the mother told Fox News.

The relative, who wished to remain anonymous, described how her cousin witnessed the Taliban and American forces open fire as chaos unfolded.

“She said she ran for cover. She ran towards a house that she thought was safe and went to see…if they would let her in because there was nothing else around. The person wouldn’t let her and her kids in.

“She just had to stand up against the wall hoping she wouldn’t get hit,” she added.

Thousands of Americans and Afghans have flooded to the Hamid Karzai International Airport following the collapse of Afghanistan with the Taliban takeover less than two weeks ago.

Over 82,000 people have been evacuated from Afghanistan, though thousands more remain desperate to leave prior to the Aug. 31 deadline when U.S. forces are scheduled to pull out.

The State Department on Wednesday warned Americans in Afghanistan not to come to the airport due to a heightened risk of an attack.

But with the August deadline nearing, people looking to flee Afghanistan rejected the administration’s warnings out of fear that their lives would remain in danger once the U.S. withdrew its forces.

“Most individuals are concerned that they’re going to get killed if they are not able to leave by August 31 – or really every single day that they’re there,” Ahmed Mohammed, legal director for the Council on American-Islamic Relations (CAIR), told Fox News.

“They feel that their lives are at risk, especially those who have family members that are SIV holders, or those who are women or have daughters,” he explained. “They are worried that the Taliban are going to come knocking on their door and potentially take one of their daughters away and force marriage, as we saw in the late ’90s.”

Mohamed’s explanation gets to the core of why the mother of five was alone in Kabul trying to flee.

She had previously traveled with her husband and oldest daughter from their village to Kabul on the day the Taliban took over the capital city, in a desperate attempt to evacuate their daughter.

After an unsuccessful attempt on the first day, they returned to the frenzied crowd at the airport and were able to get their daughter up to the gate. The father was then beaten by a member of the Taliban and knocked unconscious, explained the American cousin.

“One of the U.S. forces saw him, felt bad, grabbed him as well, and took his daughter inside the airport,” she added.

The father and daughter were later evacuated to Dubai.

The American cousin then coordinated with U.S. lawmakers and the State Department to secure a meeting place between the Abbey Gate and the Baron Hotel – the site of the second bombing Thursday – where the mother and remaining five children were scheduled to meet a security official who would then transport them to the airport.

But following the attack, the mother and her five children – who are not SIV holders –  have not been given any update on how to proceed, leaving her cousin concerned that eventually, someone in Kabul will recognize her.

“My family comes from a long line of linguists and translators, and we worked very closely with the U.S. Coalition from the beginning up until the very end,” the American cousin said. “The villages are very small, people know each other very well. They know that she comes from this background and she’s extremely vulnerable. That’s why she left her village and won’t go back. But that’s not to say that people in the city don’t know us either.”

The cousin said she has also yet to be given any direction from the State Department and said the situation becomes increasingly dire by the day.

“There’s no direction from anybody,” she said. “They’re desperate. It’s easy for me to say to her, don’t go out. But every day is an opportunity for her to get her kids out of there and be with her husband. She’s by herself, and she can’t do anything for herself and she’s running out of money.”