Nathan Coyne’s family paid tribute to the father-of-one after his inquest at Bolton Coroner’s Court ruled that he took his own life. His family said he had been deeply affected by the Covid-19 lockdown as well as the break up of a relationship

Family and friends have told of their heartbreak after the devastating death of a young father struggling with his mental health.

Nathan Coyne, 25, was found dead after an ‘episodic’ battle with depression, cocaine use and thoughts of self-harm, Bolton Coroners Court heard.

Mr Coyne was described as sociable, hardworking and talented by people in his hometown of Breightmet, Bolton.

He had been studying construction at Bolton College and played football for several local clubs.

He also enjoyed a close relationship with his four-year-old son.

An inquest into Mr Coyne’s death ruled he died by suicide.

His family paid an emotional tribute to their son at the end of the proceedings.

Mr Coyne’s father, Martin told the Manchester Evening News: ‘He was kind, especially with his son Teddy who he often spoiled. He had more than one group of friends which proved his popularity.

‘He had many holidays with us as a family when he was growing up, with lots of treasured memories. He loved football and played at a good amateur level. Nathan and I would often watch football on TV together, especially England and the Champions League – where we shared a few laughs and banter.

‘He also excelled at tennis as well at a club were I coached but, unfortunately, he was prevented from fulfilling his potential due to a re-occurring arm injury.’

Mr Coyne said his son’s favourite films were Gladiator and Saving Private Ryan, while he also enjoyed watching The Lion King with Teddy.’

Mr Coyne continued: ‘He was and always will be the much loved son of me and Tracey, little brother of Carla and Natasha, and big brother of Lydia – not to mention a fantastic dad to Teddy.’

The inquest heard the 25-year-old father-of-one suffered anxiety and depression for a number of years and was deeply impacted by the deaths of a friend and an aunt who both took their own lives. 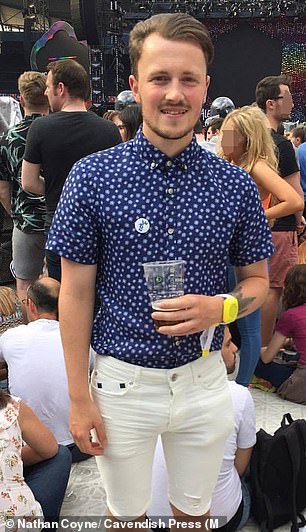 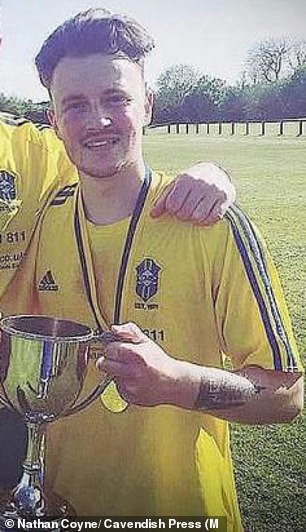 At the time of his death, Mr Coyne had been seeking help for his depression and cocaine use

He also found the breakdown of a relationship with his former partner very difficult, although he and his ex worked together to ensure their child was raised properly.

His inquest also heard his mental health was affected by the ongoing coronavirus lockdowns and the failure of another relationship. He also used cocaine on a social basis.

He had told his GP in September 2018 that he had ‘fleeting thoughts of self harm and suicide’.

His mother Tracey told the inquest: ‘Nathan was a hard worker, he could turn his hand to anything.

‘He was very social, enjoyed drinking and going out with his friends. We knew he took cocaine socially. He would binge and it was getting out of hand.

‘Sometimes he would get depressed and be in low moods, I knew it was the cocaine, I thought it was because he was coming down.

‘He wasn’t worried about work, he loved his son, he didn’t have any money troubles that we knew of. As far as I could see, he was happy.’

At the time of his death, Mr Coyne had been seeking help for his depression and his use of drugs.

However, according to Mrs Coyne: ‘Covid-19 made it even more difficult. It had a massive effect on Nathan.’

His body was found on December 5, 2020 by his sister Carla Richardson.

In the hours before his death, he had been playing cards with his friend Grant Bramhall. Mr Coyne had also been taking cocaine and drinking.

Mr Bramhall said: ‘Nathan was in a really low mood and I knew his history of depression. But he didn’t want to go back to the doctor and take more anti-depressants because he said they made him feel worse not better.

‘He was open about arguments he had been having with his girlfriend and them experiencing relationship problems. He had been particularly affected by Covid-19 restrictions because he was a very sociable person.

‘But he was a thoughtful, loving father who was looking forward to having a meaningful relationship with his four-year-old son.’

An investigation was launched and police reported that there were no suspicious circumstances surrounding the death.

A post-mortem examination was carried out and revealed that ‘recreational levels’ of cocaine and alcohol ‘at less than the legal drink drive limit’ was present in his system.

The findings led to pathologist Dr Patrick Waugh giving a medical cause of death of hanging.

Coroner Timothy Brennand concluded the inquest by saying: ‘Nathan had an episodic history of low mood, depression and anxiety that was being treated conservatively within the community.

‘Although there was no note of his specific intention, with the actions of the deceased, his history suicidal ideation, it would appear that not only was this a deliberate act, this was an intentional act.

‘He was clearly troubled by domestic developments leading to low mood. He had recently consumed cocaine and alcohol, so it’s also possible that the come down from the stimulant effects has had some bearing on what came in this case.

‘Within the grip of a depressive episode, his actions speak louder than any note he might have left.’