Selfie-snapping Capitol rioters left investigators a treasure trove of evidence — at least 140,000 pictures and videos taken during the deadly Jan. 6 siege, according to federal prosecutors.

The mass of digital evidence from media reports, live-streams and social media posts has been crucial to the FBI, which by Friday had identified more than 275 suspects, with close to 100 charged, officials said.

Investigators have been working with social media and phone companies to help ID suspects — as well as using advanced facial recognition technology, according to Bloomberg News. 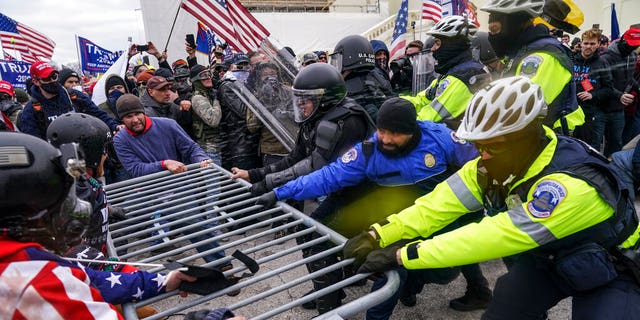 FILE: Rioters try to break through a police barrier at the Capitol in Washington.
(AP)

“We are scouring every one for investigative and intelligence leads,” Steven D’Antuono, assistant director in charge of the FBI’s Washington Field Office, told Bloomberg. “We continue to ask for more.”

Startling images quickly emerged of the siege, with many making no attempts to disguise their involvement — like bare-chested “QAnon Shaman” Jake Angeli, who was quickly IDed thanks to his horned bearskin headdress with red, white and blue face paint.

One of the first inside, Douglas Jensen, allegedly said he wanted to make sure the world saw his QAnon shirt so that “‘Q’ could ‘get the credit’” for the siege, according to officials.

Others, meanwhile, later bragged about their involvement in the occupation — including the alleged vandalism of senators’ offices — while others smoked weed or victory cigars.

The FBI quickly used many of those images to appeal for help — with at least one alleged rioter, Air Force veteran Larry Rendell Brock, getting turned in by his ex-wife.

“To those of you who took part in the violence, here’s something you should know: Every FBI field office in the country is looking for you,” D’Antuono said.

“As a matter of fact, even your friends and family are tipping us off,” he said.

The siege is one of the most expansive criminal investigations in the history of the Justice Department, with all 56 FBI field offices involved, Bloomberg noted.

“You take this data and you start mapping out where these people are, where they were in the past and you start putting them at the scene of the crime,” Patel said.

Verizon CEO Hans Vestberg also confirmed that its staff is “already working with law enforcement regarding what happened.”