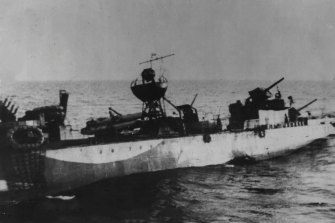 HMAS Waterhen, to her crew “the old Chook”, was the Australian Navy’s first loss at the hands of the enemy in World War II.Credit:Royal Australian Navy

Sydney, Friday – The Australian destroyer H.M.A.S. Waterhen has been sunk by enemy action in the Mediterranean. The Minister of the Navy, Mr Hughes, announced tonight that none of the personnel was lost. 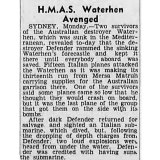 Mr Hughes said that the Naval Board had received advice that the Waterhen was damaged by bombing in the Mediterranean during recent operations and sank whilst being towed to port. There were no casualties. All members of the crew were safe.

The Minister added that this represented the first loss of a ship of the R.A.N. from enemy action. With units of the R.A.N. the Waterhen had a record of many months of valuable service in the thickest of the Mediterranean fighting. It was with regret that Australians would hear of her loss, but the fact that her company was unharmed and safe was a matter for congratulations and satisfaction. It was remarkable that although the ships of the R.A.N. had been in the thickest of fighting for many months, the casualties had been almost negligible. He recalled the return of H.M.A.S. Sydney to her home port after her spectacular exploits in the Mediterranean when she sank the Bartolomao Colleoni, and took part in some of the most hazardous encounters, and was bombed 60 or 70 times without a single casualty.

“This I venture to say will appeal to the Australian people,” Mr Hughes said. “We regret the loss of a fine ship, but we are devoutly thankful that not one Australian seaman has been lost.”