‘We WILL have a summer tourist season’: EU vows to lift borders and enable holidays on the continent in boost for families hoping to get away

The EU has urged member states to ease travel restrictions as soon as possible to kick-start the continent’s ailing tourism industry in time for the summer holidays.

All forms of transport should be restarted ‘as a matter of priority’, the European Commission said Wednesday as it laid out a guide for helping people to travel safely.

The recommendations include requiring travellers to wear masks, limiting passenger numbers, and reorganising airports and stations to maintain social distancing.

‘We will have a summer tourist season,’ the EU’s economic commissioner Paolo Gentiloni insisted ahead of the announcement, ‘but with security measures’. 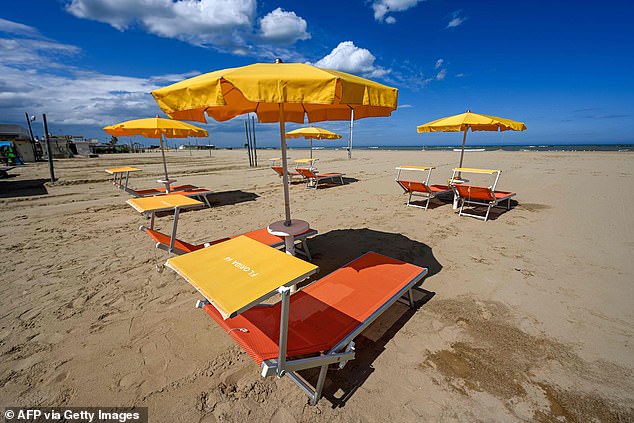 The EU has urged countries to drop border controls and restart travel in an attempt to save the continent’s lucrative summer holiday season (pictured, an empty beach in Italy)

Ministers are attempting to salvage what is left of Europe’s lucrative summer tourist season – worth an estimated £130billion – with the continent almost certainly heading into a deep recession.

The 15-page document lays out general principles for restarting travel – such as lifting border restrictions and keeping passengers safe – along with more targeted measures for each kind of transport.

For plane travel – the hardest-hit by the virus – the Commission recommends installing hospital-grade air filters on aircraft and generally improving ventilation to lower the risk of infection.

Airlines are also encouraged to ‘explore the most appropriate allocation of seats’, though no concrete guidance is given on how full planes can be.

Passenger flow through airports should be improved to limit potential for people to gather, with social distancing in place in duty free shops and restaurants.

Hand sanitizer should be available in all airports, while staff should all be required to wear PPE, the Commission said.

Commissioner do not have the power to issue binding measures, but instead makes recommendations on EU member states on best practice.

Measures may have to vary in regions with more cases of the virus, the document said, while all travel could be stopped again if a second spike of cases emerges.

Ryanair said on Tuesday that its passengers would be required to ask for permission to use the toilets to avoid queuing on the budget airline’s planes. 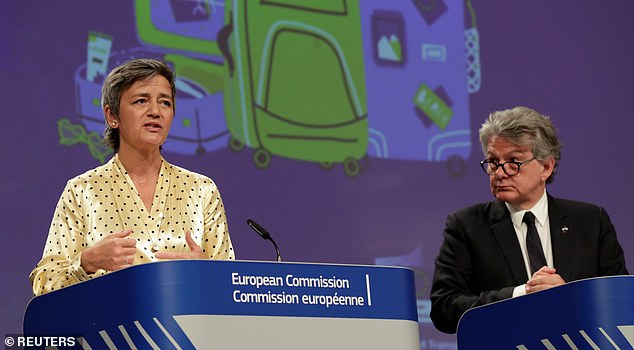 Passengers should be required to wear facemasks, capacity should be reduced to maintain social distancing, and airports and train stations should be reorganised to stop crowding, commissioners said

Among its other plans, the European bloc’s executive proposed that vouchers for cancelled flights or holidays remain valid for at least a year with protection against bankruptcies so people would be more willing to accept them, instead of demanding full refunds.

But it refused to suspend an EU law giving passengers the right to a full cash refund if a flight has been cancelled.

It said companies should make vouchers more attractive by giving them a longer validity period, offering the same conditions as the original booking or even a higher value.

“Many companies have come under pressure and this liquidity crisis would be less severe if customers accepted vouchers instead of cash refunds,” Vestager said.

Such vouchers should also be transferable and automatically refundable if not redeemed after a year, the Commission said.

For train transport, the EU executive said social distancing should be applied via increased frequency and train capacity.

Wearing masks in trains and at stations should be required, peak hour travel should be discouraged, doors should open automatically and disinfecting gel should be available.

Similar rules will apply to other public transport and to cruise ships. The Commission said the passenger numbers on cruises should be cut and ships must have cabins available to quarantine people if needed.

It is up to the member states to follow the guidelines, which do not specify a date for resuming travel and are not legally binding.

The European Aviation Safety Agency and the European Center for Disease Control are due to publish further safety protocols for airlines in the coming weeks.