Rhode Island: In February, healthcare workers and epidemiologists in India puzzled over their good fortune. Coronavirus case counts had gone down, demand for ventilators was manageable and experts predicted that the country would be spared a major second wave.

In April, events have taken a different turn. Images that have gone viral on social media show bodies heaped in makeshift crematoriums. Hospital beds and oxygen are scarce. Desperate patients and relatives have turned to the black market for medicine, while others die in hospitals amid oxygen shortages. Recent days have recorded repeated record infection figures, which are likely under counts. 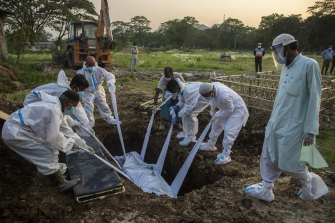 Relatives and municipal workers in protective suit bury the body of a COVID-19 victim.Credit:AP

As the pandemic surges – and as hospitals buckle under the strain – some have blamed their government, and the wider world, for failing to stem the cataclysmic spike.

Here’s what you need to know about the coronavirus surge in India.

How did the outbreak get so bad?

That question continues to puzzle experts. Back in early February, hospitalisation numbers had plummeted and India was reporting 10,000 to 12,000 new cases a day.

It is now the worst country for daily infections, recording six straight days of more than 300,000 cases, and a focal point of international concern. On Tuesday, it reported 323,144 new infections for a total of more than 17.6 million cases, behind only the United States.

Experts are starting to think that immunity in India may not have been as widespread as previously believed. Some scientists argue that earlier waves of infections primarily affected the poor, but the current surge is reaching wealthier people who had just started socialising again after staying home and isolating during the first wave.

Large group gatherings may have also played a role: Prime Minister Narendra Modi has been criticised for lifting virtually all restrictions and holding massive political rallies, and a religious festival that drew tens of thousands of Hindu pilgrims from all over the country has been linked to more than 100 cases. 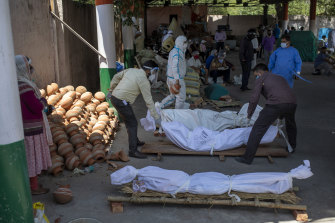 People line up dead bodies of those who died of COVID-19 at a crematorium, in New Delhi.Credit:AP

“There was a public narrative that India had conquered COVID-19,” Ramanan Laxminarayan, an epidemiologist in Princeton University, told Nature. People also began to relax more after the launch of a vaccination campaign in January, he added. As a result, many let their guard down and went back to socialising, travelling and holding large weddings.

It’s not yet clear if the presence of highly-infectious new variants is the key factor that made India’s outbreak go from bad to worse. Scientists generally agree that it’s likely that these variants played a role, but exactly how much of a role is up for debate.

What we do know is that the variant B.1.1.7, which was first identified in the United Kingdom, is now the dominant variant in the Indian state of Punjab. That’s significant because multiple studies have found that B.1.1.7 is between 40 per cent to 70 per cent more contagious than earlier iterations of the virus, and also appears to be more lethal.

Another variant, B. 1.617, has become the dominant variant in the state of Maharashtra, according to Nature. That variant is sometimes referred to as the “double mutant” variant because it contains two key mutations that were found in two other highly-infectious strains. So far, however, there’s no hard data that suggests that B. 1.617 is more transmissible than other variants, and India doesn’t perform enough genome sequencing to determine whether B. 1.617 is driving the current outbreak.

Variants first identified in Brazil and South Africa have also been identified in India, the country’s Ministry of Health and Family Welfare said last month.

What has the government done about it?

Coronavirus vaccines will be available to anyone over the age of 18 starting on May 1. The government is also curbing the number of exported vaccine doses, focusing on distributing those doses to citizens.

Some cities and states have announced new lockdown restrictions, including curfews and bans on travel and non-essential activities. Modi, meanwhile, has said that lockdowns should be a last resort and declined to institute one nationally. 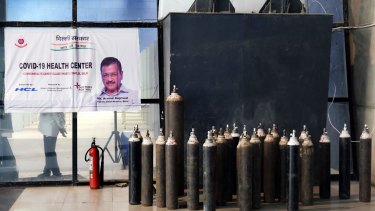 Oxygen tanks outside a ward at the COVID-19 Care Centre set up at the Commonwealth Games Village Sports Complex in New Delhi. There is a shortage of oxygen for patients in hospital and at home.Credit:Bloomberg

Since some Indian states don’t have plants where they can produce their own liquid oxygen, they have to wait for supplies to be trucked in from other parts of the country. Filling up an oxygen tanker takes two hours, according to the BBC, which has led to lengthy lines outside oxygen plants. Once full, the tankers can only drive at 40 kilometres per hour and travel during daylight hours.

As demand soars in crowded hospitals, some critics say the government should have been better prepared. In October, the Health Ministry announced a plan to build more oxygen plants, but so far only 33 out 162 have been constructed. Modi announced plans for another 551 oxygen plants – one for each district – on Sunday. The Prime Minister has ordered that those “be made functional as soon as possible,” a news release from his office stated, but it may already be too late for many of the patients who are dying due to oxygen shortages at hospitals right now.

“We have been telling authorities that we are willing to increase our capacity, but we need financial aid for that,” Rajabhau Shinde, who runs a small oxygen plant in Maharashtra, told the BBC. “This should not have happened. As the saying goes, dig the well before you’re thirsty. But we didn’t do that.”

How has the world responded?

Several countries have stepped up to help.

Singapore, Germany, and the United Kingdom dispatched oxygen-related materials to India over the weekend – they began arriving on Wednesday. France, Russia and Australia will send medical aid, and China and Pakistan have offered help.

The European Union is coordinating with member states to provide oxygen and medicine, and World Health Organisation Director General Tedros Adhanom Ghebreyesus said the WHO would send additional staff and supplies.

As other countries offered aid, pressure mounted over the weekend for the US to do more.

The US said it would send raw vaccine materials, ventilators, personal protective equipment, oxygen-related supplies and therapeutic medicines. It is also mobilising an American “strike team” of health experts, as well as funding for “a substantial expansion” of Indian vaccine manufacturing capability.

In a phone call with Modi on Monday (Tuesday AEST), Biden pledged to support to beat back the virus surge. The White House also announced the US would share up to 60 million doses of the AstraZeneca coronavirus vaccine with other countries after they undergo a safety check – a process that could take weeks or months. It’s unclear how many of those doses will go to India.

Awash in vaccines, the US has faced criticism for hoarding doses and maintaining policies that have curbed the export of vaccines and raw materials. Doctors Without Borders praised the United States’ decision to donate AstraZeneca doses, but urged the US government to demand that pharmaceutical companies “share technologies and know-how” with manufacturers across the world. Pharmaceutical companies have rebuffed such requests.

What in the World

A note direct from our foreign correspondents about what’s making headlines around the world. Sign up for our weekly newsletter here.