First, a confession. And as that spinmeister, Mark Zuckerberg, would say, this will sound a bit “meta”. When I first got the inkling to write a column on Emmanuel Macron’s remark about Scott Morrison’s duplicity in ditching the submarine deal, a remark that will reverberate for years to come in the annals of diplomacy, I misinterpreted its meaning. 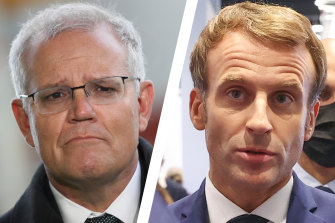 This might have been because of the comma separating “I don’t think” and “I know”: the comma being among the more wishy-washy punctuation marks.

Or maybe, the speaker being French, I succumbed to cultural stereotyping and assumed this was dialogue sprung from a Jean-Luc Godard film, wherein a smouldering Jean-Paul Belmondo says in a Parisian bar: “I don’t think, I know.”

An assertion of epistemological crisis, in other words, as in: “I don’t think I know what is real or true. I am losing faith in the very possibility of knowledge itself.”

It was only after I watched the video report from the G20 summit in Rome that I realised Macron’s answer to the journalist’s question, “You think he lied to you?” was blunt, less a comma than a full stop.

To translate the French President’s comment into Australian: “No mate, I don’t think the bloke lied to me. I bloody know he did.”

The statement is bracing, like someone dunking your head underwater. It got me thinking about how Morrison-speak makes everything so hazy it’s like living in a Godard flick.

I don’t think I know anything – whether that anything I don’t think I know is about strategic alliances and regional security or climate change policy or university funding, or vaccine supply when he said the rollout wasn’t a race, by which he really meant it couldn’t be a race because he didn’t order enough Pfizer.

I’m not saying the haze is a product of prime ministerial lies, such accusations not being my taste or entirely accurate. It’s simply that Morrison’s a spinmeister, albeit not quite in the same league as Zuckerberg. This is well known, of course. Even so, sometimes I just think I know it. 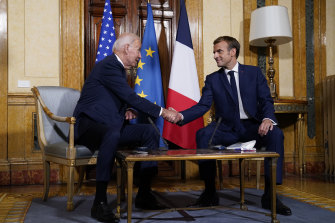 The submarine fiasco likewise defies rational understanding: the $90 billion deal for France to help build 12 diesel submarines binned for maybe/possibly eight nuclear-powered subs supplied, in about 20 years, with the help of the US and Britain after an 18-month review to identify an “optimal pathway” to same.

This new deal was a big deal, though. A big September announcement, around 7am Australian time – 76 years and 14 days after the Japanese surrender aboard USS Missouri, 82 years and 15 days after Germany’s pre-dawn invasion of Poland – at a joint virtual press conference between freedom-loving Joe Biden, Boris Johnson and “that fella downunder”.

At a time of global turmoil, with many Australians hunkered down in battle with the virus, few wouldn’t have felt the fleeting warmth of fireside nostalgia at the optics: three ashen-haired leaders from the Anglosphere together once more, this time under the banner of AUKUS, the awkward regional implications of which everyone could worry about later.

As to Macron’s “liar” charge, which is of Morrison keeping him in the dark about the new deal, I cannot judge how much of his indignation is warranted and how much performative. To paraphrase Barnaby Joyce, for Chrissakes it’s not like we stole Noumea or something. 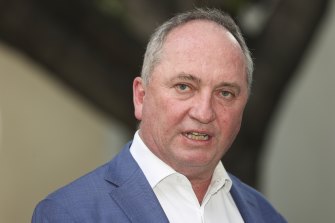 Deputy Prime Minister Barnaby Joyce: “We didn’t steal an island. We didn’t deface the Eiffel Tower. It was a contract.”Credit:Alex Ellinghausen

Sadly, I wasn’t at the leaders’ outwardly chummy catch-up over dinner at the Elysee Palace in June at which, the PM now says, he told his French counterpart that conventional subs “were not going to be able to meet” Australia’s strategic interests.

A text message, suggesting Macron was jittery about the deal’s status, has since mysteriously surfaced. But, Morrison explained, he wasn’t about to tell Macron what was really going on behind the scenes and risk sabotaging the “secure” negotiations with our traditional allies on the nuclear deal.

I know (or think I know) the channelling of historical subtext when I see it. Morrison might as well have said: “Well, would you disclose state secrets to those axe-grinding, cheese-eating surrender monkeys?”

Put yourself in Macron’s shoes, though, and the heart breaks. Not because of ScoMo who I suspect Macron would see as the Kraft-eating type, so what can one expect. Not because of BoJo – Pythonesque frontman of France’s traditional enemy.

But I can almost hear the plaintive cry: “Et tu, Biden?”

The latter admittedly has his own struggles with linguistic clarity. He says he was unaware France had not been given advance notice Australia would be terminating the contract: “What happened was, to use an English phrase, what we did was clumsy … I was under the impression that certain things had happened that hadn’t happened.”

Whether Biden’s being frank about what he thought he knew is a matter of growing debate among security experts and well-placed journalists. His words, nevertheless, resonate. Some of us might have been under the impression that a climate “plan” for net-zero emissions by 2050 might happen, only to discover it actually hadn’t happened.

In Glasgow, nations are urging Australia to make deeper cuts earlier, nations including France and Britain. Meanwhile Australia is busily forging new alliances on the slow phase-out of fossil fuels with Russia and Saudi Arabia.

Is the rest of the world seeing through the fog from the fellah downunder?

Julie Szego is a regular columnist.