Washington: When Joe Biden delivered his inaugural address outside the Capitol on a frosty day in January, he declared that America faced a “winter of peril and possibility”.

“Few periods in our nation’s history have been more challenging or difficult than the one we’re in now,” Biden said.

Just a fortnight earlier, furious supporters of Donald Trump stormed the Capitol in a bid to overturn what they saw as a fraudulent election. The country was recording 195,000 new coronavirus infections a day, as well as 3000 deaths. 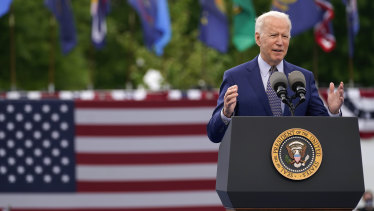 US President Joe Biden marked his 100th day in office by talking up his national investment plans in Duluth, Georgia. Credit:AP

When Biden returned to the Capitol this week for his first presidential address to Congress, he painted an altogether sunnier picture.

“America is on the move again,” he said. “Turning peril into possibility, crisis into opportunity, setback into strength.”

Biden was speaking on the eve of his 100th day in office, the symbolically-powerful milestone he reached on Friday (AEDT). Wary of unfavourable comparisons to predecessors like Franklin D. Roosevelt – who established the marker in 1933 – other presidents have played down the significance of the moment.

By contrast, Biden has emphasised the 100-day threshold by using it as a deadline for several policy goals. 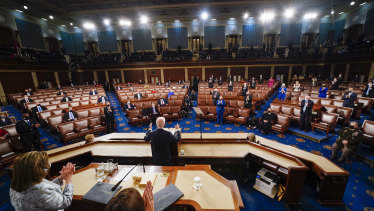 Big vision for the US: President Joe Biden addresses a joint session of Congress.Credit:AP

And he’s encouraged comparisons to Roosevelt, who took power during the depths of the Great Depression and moved quickly to enact his expansive New Deal program. Roosevelt was the only former president Biden mentioned by name in his speech to Congress this week.

Jonathan Alter, author of The Defining Moment: FDR’s Hundred Days and the Triumph of Hope, says there are important parallels between the two presidencies. “Both men faced big crises when they came to office and both men found opportunity in crisis,” he says.

The numbers justify Biden’s claims of a national comeback. Daily coronavirus cases have plummeted to around 50,000, and deaths to 700 a day. So far, 234 million vaccine doses have been administered – exceeding Biden’s initial target of 100 million and subsequent goal of 200 million.

During the election campaign, Trump predicted a “Biden depression” if his opponent was elected. Instead the the S&P 500 has soared by 24 per cent since election day – the biggest stock market gains since 1953. Economic growth is expected to exceed 7 per cent this year, the fastest since 1984.

Republicans complain – justifiably – that Biden is benefiting from good timing as much as good management. The vaccination rollout, and the economy, were already poised to take off when he entered the White House.

The transformation in the tone of American politics, on the other hand, is directly attributable to the shift from Trump to Biden.

The new president doesn’t vent his feelings on Twitter. He doesn’t seek to antagonise his political rivals. His administration rolls out policy announcements in an orderly way. He’s appointed experienced, competent officials to senior roles. 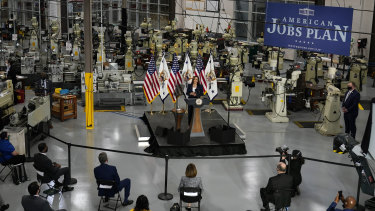 The torrent of falsehoods from the White House has slowed to a relative trickle: Biden has made 67 false or misleading statements during his first 100 days compared to 511 for Trump according to The Washington Post’s fact checking unit.

“With Trump it was like having a jackhammer blasting outside your window in the middle of the night,” Alter says.

Joe Hockey, who served as Australia’s US ambassador from 2016 to 2020, says: “In the Biden administration there is a quiet steely resolve backed up by team discipline that was clearly absent in the Trump administration.”

But Hockey urges Australians not to be fooled by the low-key appearance of Biden’s presidency.

“He’s pursued an incredible amount of reform in a short amount of time,” he says.

“There’s an old saying that if you elect a young pope in Rome they’re very cautious because they are looking for longevity in the job. If you elect an old pope they know that time is running out and they get on with it. That’s true for Joe Biden.”

During the Democratic presidential primaries Biden ran as a pragmatist and a moderate, rejecting his rivals’ plans for a government-run healthcare scheme and free college. In the general election he ran a small target campaign promising a return to normalcy and civility after the divisive Trump era. 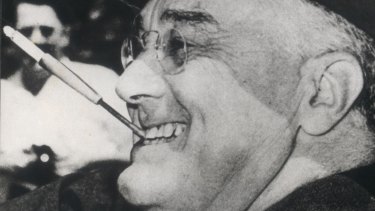 Biden is being compared to Franklin Delano Roosevelt.

Picking up two Georgia Senate seats in early January gave Democrats control of that chamber, allowing Biden to expand his legislative goals. Both admirers and critics agree that Biden has pursued a surprisingly ambitious and progressive policy agenda since taking office.

In just 100 days Biden has announced $7 trillion in federal spending, paid for mostly by proposed tax increases on corporations and wealthy Americans. He’s also announced a goal to cut America’s carbon emissions in half over the next decade.

“This is a revolutionary presidency,” veteran Democratic strategist James Carville told MSNBC this week. “He’s trying to change the balance of power in this country.”

Former Obama administration official Van Jones said it was clear that he and other progressives had underestimated Biden’s scale of ambition. “He is chasing FDR,” Jones said on CNN. “He’s swinging for the fences.”

Biden’s biggest achievement was signing into law a $2.5 trillion COVID-19 relief package that sent stimulus cheques to over 150 million Americans, expanded unemployment benefits and included a major increase to the child tax credit. The Urban Institute think tank estimates it will slash child poverty in half and cut the national poverty rate by a third. 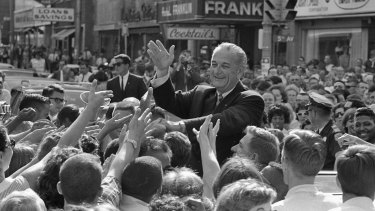 Biden’s relief bill alone was already twice as big as the stimulus package Barack Obama signed at the height of the global financial crisis. He has since followed up with a $2.6 trillion infrastructure plan that would pour money into roads, bridges, airports, broadband and renewable energy.

This week Biden unveiled a social policy plan, worth $2 trillion, that would create America’s first parental leave scheme, establish universal kindergarten and two years of free community college. Taken together, his plans easily represent the most dramatic expansion of the federal government’s role in American society since Lyndon B. Johnson’s “Great Society” program in the 1960s. 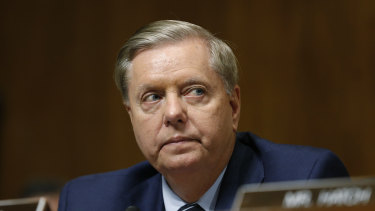 “If you were expecting steady, slow, incremental change you’d be really struck by what you’ve seen over the past 100 days,” William Howell, chair of the Department of Political Science at the University of Chicago, says. “When it comes to policy, Biden has been really aggressive.”

While progressive Democrats are delighted by Biden’s boldness, Republicans are incensed.

“The bottom line tonight: If I ever hear that Joe Biden’s a moderate again, I’m going to throw up,” Republican Senator Lindsey Graham said following Biden’s speech to Congress.

“Because after tonight, he embraced socialism. He made Barack Obama look like Ronald Reagan.”

Republican Senate leader Mitch McConnell recently said: “President Biden ran as a moderate but I’m hard-pressed to think of anything at all he’s done so far that would indicate some degree of moderation.”

Despite Biden’s talk of national unity, the country’s partisan divisions remain as entrenched as ever.

Not a single Republican voted for his COVID relief package in the House of Representatives or Senate.

Biden’s approval rating, according to the FiveThirtyEight polling average, is 54 per cent. That’s 12 points higher than Trump’s approval rating at the same stage of his presidency but very much at the lower end when compared to other past presidents.

Just one in 10 Republican voters say they approve of the job Biden is doing.

Matthew Glassman, a senior fellow at Georgetown University’s Government Affairs Institute, says an approval rating in the mid 50s is probably as good as any president can hope for in today’s hyper-partisan age. “You’re just not going to be as popular as past presidents were,” he says.

Polling on most of Biden’s policy proposals suggests they are in the mainstream of American public opinion. Some are wildly popular – like the COVID relief bill, which seven in ten Americans supported.

Glassman says it is also notable that Biden “doesn’t generate the same level of visceral partisan hatred on the right” as other prominent Democrats.

Fox News host Tucker Carlson this week announced he would no longer refer to the executive branch of government as the “Biden administration”.

Carlson’s evidence-free claim that the 78-year old “has no active role in the government” was not intended to be flattering. But his attempt to erase Biden from the political narrative showed that the mention of his name does not provoke the same ire among conservatives as, say, Barack Obama or Hillary Clinton. 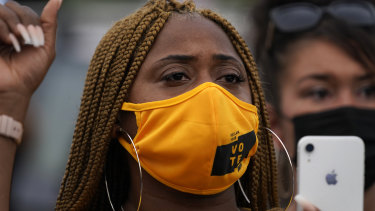 On foreign policy, Biden has moved quickly to replace Trump’s isolationist stance with a return to multilateralism and alliance building. He’s rejoined the World Health Organisation and the Paris Climate Accord, and is working to reform the World Trade Organisation.

On China policy there is more continuity between the two administrations: Biden has maintained Trump’s tariffs and tough rhetoric, defying expectations that he would go soft on Beijing.

He moved decisively to announce a complete withdrawal of US troops from Afghanistan by September – a four month delay from the original timeline outlined in an agreement between the Trump administration and the Taliban.

The standout weakness for Biden has been immigration at the US-Mexico border.

Polls show only around a third of Americans approve of Biden’s performance on immigration and border security, lower than on any other issue. 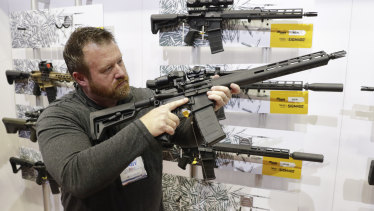 The gun issue will remain a challenge for Biden.Credit:AP

“That is his achilles heel – there’s no doubt about that,” Hockey says. “The White House would be well-advised to pick up the phone and speak to some wise old Labor operatives to find out how it went for them taking a more open door approach to the borders.”

Biden will face a big challenge in coming months to shepherd his infrastructure and social policy plans through Congress.

Joe Manchin, a conservative Democrat who holds a swing vote in the Senate, has already expressed unease at the amount of spending and demanded the White House work with Republicans to find compromise.

Other Democratic priorities – including passing gun control measures and changing the nation’s immigration laws – appear to have next to no hope of passing the Senate.

“The first 100 days has been easy,” Glassman says, “compared to what comes next.”