Desmond Pickering, who played a key role in the development of special education in Victoria in the 1970s, 1980s and 1990s, had died aged 82.

Des – one of five children born to Eileen and Arthur Pickering – spent his early life in Victoria Street, Richmond.

As a young man, he was a well-rounded athlete who played cricket, basketball and trained with the under 19s Richmond football team. He enjoyed his time in the commando unit of the army where the physical challenges of training were to his liking as was jumping out of planes.

Des was an intelligent and deep-thinking person who enjoyed intellectual challenges and learning new things. The nuns at St James Primary School can be credited with first seeing his potential as they decided he should attend Parade College to further his education. He was not academically strong enough to secure a scholarship, so they arranged one based on his singing ability which amused him greatly. Upon completing his leaving certificate, he studied at Melbourne Teachers’ College in 1956-57.

He was then posted to small, often one-teacher schools where he fell in love with the bush. He would fondly recount sending children to the school dunny, stick in hand to fend off magpies and to check for snakes. His love of the bush endured with regular trips to the high country, Wilson’s Prom and along the Murray River.

He returned to the city with a posting to North Richmond Primary School, where he taught the remedial class that was called an “opportunity grade”. This sparked his interest in special education, and he spent the next four years at Royal Park Special School, which was part of Turana Youth Training Centre. He taught in the primary division, the medium security section of Quamby and the maximum-security section at Poplar House. 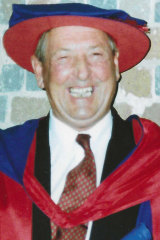 He completed the short special education course at Melbourne Teachers’ College in 1961. It was when Des was teaching at Turana that he fell in love with Avril. They were both holidaying at Wilson’s Promontory. Four weeks later they were engaged and enjoyed 58 years together after being married at St Patrick’s Cathedral. They had two children, Megan and Jarrod.

In 1968, Des became a research officer in the curriculum and research branch of the Education Department before becoming the head of its reading, research and treatment centre in Carlton in 1972 for 18 months. Until 1976, he was then senior special education officer (remedial education), one of the top administrative positions in Victorian special education. During this period, he also completed his matriculation and then gained a bachelor of commerce degree at Melbourne University in 1973.

A major change Victoria’s special education had its beginning in 1973 with The Age’s Minus Children campaign. The articles over the second half of the year highlighted the appalling conditions in many of the institutions administered by the Mental Health Authority, including the lack of sufficient beds and buildings for people who should be catered for and the poor education opportunities for the children. In December that year, the Victorian Parliament passed the Education (Handicapped Children) Act which made the education of children, no matter their disability, a responsibility of the Education Department. This led to a major boost in the provisions of facilities and teachers for these students.

Des was involved in several of these changes, especially when he moved to work in tertiary education in 1976 as a senior lecturer in special education (learning disabilities) at Victoria College (which became part of Deakin University) before progressing to become the principal lecturer/head of department in 1981. In the meantime, he had gained an MA in psychology at Melbourne in 1979 and later a PhD at Deakin University in 1996.

This later period of his academic life encompassed a tumultuous time for Victorian special education. After 10 years of Labor government, the Liberals gained power in 1992. The new Education Minister, Don Hayward, commissioned a review which presented a report called Integration and Special Education in Victorian Schools: a Program Effectiveness Review co-authored by R.B. Cullen and N.F. Brown.

This had followed a report by the auditor-general which focussed essentially on the integration program, the major initiative for the education of students with disabilities introduced by the previous Labor government during its last few years. Prior to this, state government provision in the field was mainly through distinctive special schools working with students with particular disabilities and handicaps. This audit report questioned the apparent growth in numbers of students with disabilities being funded in both special schools and regular schools over the period and criticised the management of the integration program, particularly its resourcing, evaluation and staffing.

Des chaired the Cullen Brown implementation advisory committee, which published its report in May 1993. The review was comprehensive and questioned, and rebutted in several cases, many points made in the earlier audit report. The report was wide-ranging with a number of recommendations in the area.

The minister, Don Hayward, in response launched “educational opportunities for students with disabilities and impairments” in which he announced a proposed funding model of resource allocation which would fit with the Schools of the Future program giving schools the responsibility for the management of financial resources.

He enunciated the principle of parental choice of school including them being given comprehensive and balanced information on the range of options. He also heralded the establishment of program support groups which would replace existing integration support groups, changing the focus from the pursuit of resources to program development and monitoring student progress.

Following these Cullen Brown processes, a specialist working party was set up in 1993 to investigate a new funding model. The model developed still forms the basis for funding in the field of Victorian special education.

Des’s association with the special education faculty at Deakin University for more than 20 years as a lecturer saw him held in high esteem by his colleagues and adored by his students. His research was widely published. His private practice, Edpsych Services, was successful and lent itself to his love of figuring students out and putting strategies in place to help them.

He spent from 1997 to 2004 as principal independent reviewer of special schools for the Victorian Department of Education. His success as a reviewer and consultant was that he did not push his way forward but rather listened to teachers and gave out information in a way that made it feel as if teachers had the idea. He would provide a diversity of options he had researched which allowed teachers to develop a wide ranging and flexible program for each child that teachers had ownership of. His incredible knowledge coupled with his humour and generosity created strong teams in schools that changed the learning experience of students and the teaching experience of teachers for the better.

Des was involved in study tours to overseas schools which included Malaysia, Borneo, Indonesia, Thailand, Vietnam and Fiji. His work also led him to conferences in Japan, New Delhi, New Zealand and Helsinki as well as Australia. He acted as a consultant to numerous local schools as well as the ministries of Education in Fiji, Malaysia and New Zealand

Des is survived by his wife Avril, daughter Megan Casey and son Jarrod. Tony Thomas was a close colleague.