Britain’s coronavirus outbreak may have killed 53 per cent more people than daily Government statistics let on, meaning thousands of victims are still uncounted.

Weekly data released today showed that deaths outside of hospitals pushed England’s death toll to 21,284 for April 17, a significant rise on the 13,917 announced on that date by the Department of Health.

Office for National Statistics data, which gives a weekly picture of how many people have died outside of hospitals, recorded 3,096 care home deaths in the week from April 11 to April 17. This was almost triple the 1,043 announced the week before.

Many of those who die outside of hospitals are not tested for the coronavirus while alive, meaning this data shows Britain’s outbreak is much larger than it appears.

The World Health Organization has warned that half of COVID-19 deaths happening in Europe are taking place in nursing homes, and the UK’s count is rising fast.

British officials have faced heavy criticism for not offering enough support to the sector and chief scientist Sir Patrick Vallance said they were warned ‘very early on’. 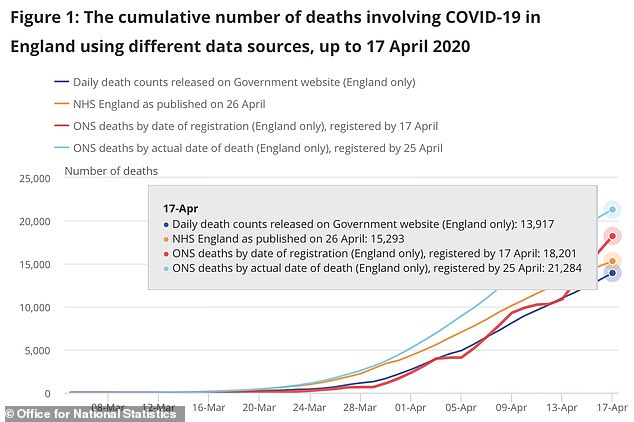