Tokyo: Yoshihide Suga’s top rival to become Japan’s next Prime Minister after the Olympic Games, says his country must learn from Australia’s coronavirus strategy as cases in Tokyo surge to record highs.

Labelling the Suga government’s response to COVID-19 an “utter failure”, Yukio Edano said no amount of Olympic gold for Japan would compensate for “putting the lives and the health of the Japanese people in a very grave situation”. 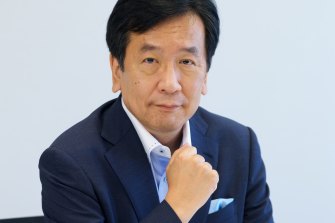 In an interview with The Sydney Morning Herald and The Age in his parliamentary office in Tokyo, the leader of the Constitutional Democratic Party of Japan said the Olympics would leave behind painful lessons for the Japanese people.

With hospitals reaching capacity, the government is now restricting admissions to patients with severe cases of COVID-19. Eight more prefectures will be put under a state of emergency from Sunday, covering 70 per cent of the 126 million-strong population.

“The situation on the ground is extremely severe,” Economy Minister Yasutoshi Nishimura said on Thursday.

Edano, a former chief cabinet secretary, minister of economy and the person in charge of the country’s response to the 2011 earthquake and tsunami, said it was time to put the country’s pandemic response under a central command, similar to Australia’s national cabinet.

“Right now, there are multiple ministers who are just going their own way respectively, all the ministries and agencies are also doing what they think they ought to do and the prefectural governments are doing whatever they think they want to do,” he said. 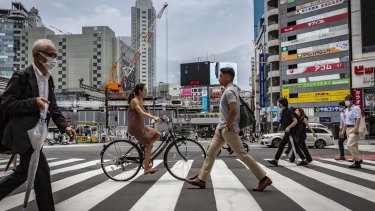 “All of them are not acting in alignment. What is required is a headquarters that can manage the entire country. That has been absent for one and a half years.”

He said Australia, New Zealand and Taiwan have been relatively successful at suppressing the coronavirus. “Their experiences must be learnt,” he said. “And that is what exactly the Japanese government and its headquarters must do.”

Japan recorded 14,114 coronavirus cases on Wednesday, doubling the number of infections since the start of the Games. Australia has averaged 260 cases per day over the past week and its two largest cities Sydney and Melbourne are in lockdown.

Edano said the state of emergency measures, which rely on voluntary compliance to stop people from leaving home, and from drinking or eating out, are being ignored by the public.

“The public’s trust in the government has declined rapidly. And as a result, the people are no longer responding to accommodating the request of the government any longer,” he said. “If there is a government change and if the leader can appeal to the Japanese public with confidence, people will listen to the request.”

The leader of the second-largest party in the Diet said the Olympics, which has given Japan a record 21 gold medals, has “not compensated for the health risks”.

“This is deeply unfortunate but it has simply been a series of errors from the government and on top of that, they do not recognise their own failures,” he said.

The 57-year-old has the best prospects of upsetting the ruling Liberal Democratic Party in a decade. The LDP has governed Japan for most of the last 50 years but Suga’s government faces sliding opinion polls and personal approval ratings of 34 per cent. 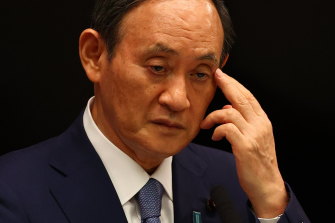 “We are getting closer to that possibility,” said Edano. “Which means if we do win, we have to prepare for what we are we going to do regarding this very serious situation of the pandemic.”

Suga has defended hosting the Games as coronavirus infections continue to grow, arguing there is no link between the Olympic bubble which has recorded less than 300 cases and the broader population. But the Japanese Medical Association has said the Games have sent mixed messages to the public, minimising the effect of the state of emergency measures.

Suga, who replaced long-time prime minister Shinzo Abe in September, said on Thursday he would not withdraw the new hospital policy of admitting only severe cases, after a widespread backlash among medical groups and internally within his party.

To win government Edano would have to form a coalition with a ginger group of parties. The CDP is polling 16 per cent but could combine with the Democratic Party for the People and the Japanese Communist Party to oust Suga by winning the required 50 per cent of 465 seats.

The election campaign will begin after the end of the Paralympics in September with the nationwide ballot due by October.

“Because the current administration is in such a deplorable situation there are parties we would cooperate with just simply because we have to remove and replace the current horrible government,” said Edano.

He said the parties could work together to establish a new administration but then once in government remain separate from the Communist Party because “we have such fundamentally different positions in national security, for example”.

Edano offered bipartisan support for Australia in its ongoing dispute with Beijing.

“With the US as a cornerstone, collaborating with Australia and other partners, we take the position that there should be international collaboration in order to counter the expansionism of China,” he said.

Never miss a medal or great sporting moment with our Olympic update emailed daily. Sign up for our Sport newsletter here.