Amsterdam: A judge in the Dutch murder trial over the downing of a Malaysian airliner over rebel-held eastern Ukraine in 2014 says there is evidence the airplane was hit by an outside explosion caused by a Russian-made Buk missile.

Judges on Tuesday, local time, started reading out the evidence in the trial in the Netherlands against four fugitive suspects – three Russians and a Ukrainian citizen – accused of shooting down the plane on July 17, 2014 and killing all 298 people on board. Among those killed were 38 Australian citizens and residents. 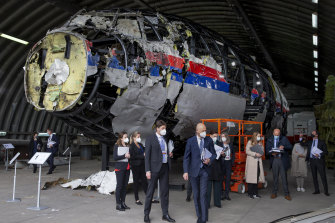 Flight MH17 from Amsterdam to Kuala Lumpur crashed in a field in territory held by pro-Russian separatists fighting against Ukrainian forces after being shot down with what international investigators say was a Russian surface-to-air missile.

“Experts have stated that the impact on the hull [of the plane] is compatible with a Buk missile system and a Buk warhead. No damage was found that would not be compatible with that scenario, or that would indicate another scenario,” judge Hendrik Steenhuis said.

After years of collecting evidence, a team of international investigators concluded in May 2018 that the missile launcher used to shoot down the aircraft belonged to Russia’s 53rd Anti-Aircraft Missile Brigade.

The four suspects are standing trial in absentia. After a year of mostly procedural hearings, judges announced the start of the evidence phase on Monday.

This week the panel of judges will specifically look to determine what type of missile hit the airplane, where it was fired from and whether the four suspects can be held responsible.

“Today, it is about: was it a Buk missile or not?“, Hans de Borst, who lost his daughter in the crash, said before the hearing.

“I think the question is already answered but the court is now really answering it, so it’s important.”

Get a note direct from our foreign correspondents on what’s making headlines around the world. Sign up for the weekly What in the World newsletter here.