‘Stupid’ Lloyds Bank customer adviser, 27, sold over 80 account details for £50 each to gambling addict friend who stole £80,000 – but both are spared jail

A customer adviser for Lloyds bank sold customers’ account details to her friend who was a gambling addict.

Jaspreet Marwaha, from Birmingham, gave the information of more than 80 accounts to Mohammed Saif Maqsood, from Blackburn, who paid £50 for each set of card details and swiped between £82,000 and £92,000 from them.

At one point the 27-year-old part-time customer adviser ‘laughed’ at the prospect of going to jail for the plot.

But following a two-and-a-half year investigation the pair escaped immediate prison sentences after admitting conspiracy to defraud, and instead were handed suspended jail terms at Birmingham Crown Court on Friday, August 28.

The bank has since managed to recover a large chunk of the money although more than £25,000 remains outstanding, in relation to 45 customer accounts. 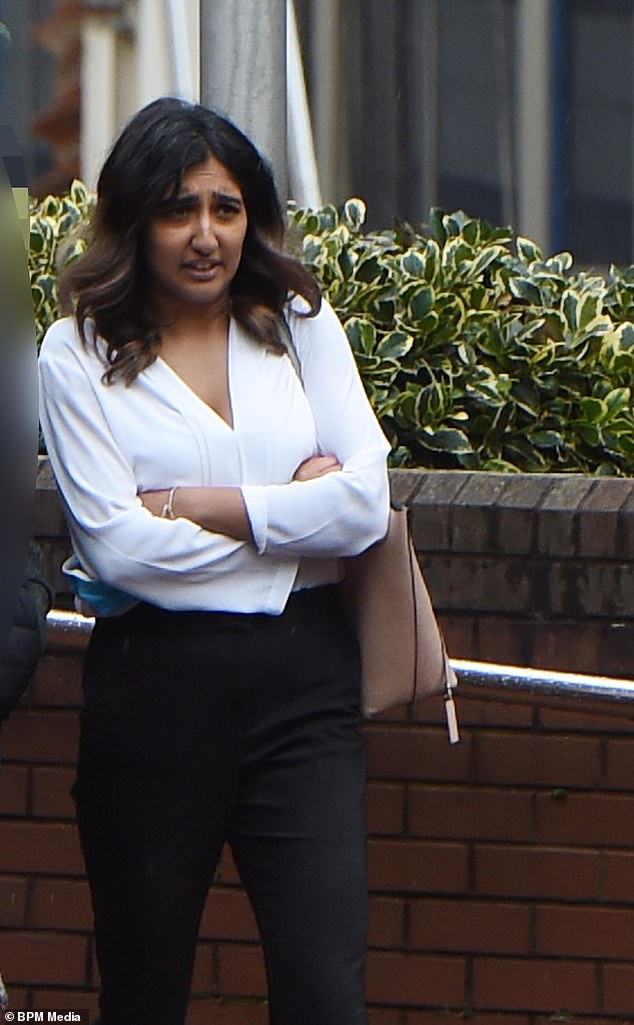 Jaspreet Marwaha (pictured), from Birmingham, is now a Sky Sports assistant producer and has not told her employer about her involvement in selling over 80 bank account details to her friend

Marwaha worked at the Shirley branch in Solihull from 2009 and sold bank account details from November 2017 to March 2018 when she was arrested.

During a police interview she initially claimed that ‘there was an element of coercion by the co-defendant [Maqsood] who was threatening to reveal an illicit relationship’, prosecutor Jason Avis said.

Mr Avis explained that the police went through various text messages between the two codefendants where Marwaha laughed at the idea of going to jail for the crime.

Maqsood also said that he was worried about getting caught and talked about a new plan to make big money.

Maqsood had set up 48 separate betting accounts with Coral bookmakers, some of which were in Marwaha’s name.

Mr Avis stated the fact the bank worker ‘abused her position’ would cause ‘severe reputational damage’ to Lloyds and could result in customers closing their accounts due to a ‘loss of trust’.

Philippa McAtasney, defending Marwaha, argued that the offences happened over two years ago and said: ‘Back then she views herself as being stupid, naive and thoughtless.

‘She failed to grasp the scale of potential loss at the time.

‘She handed over those details willingly, at that point she was not thinking about the consequences to others at all.’

She continued saying the plot had been Maqsood’s idea and that Marwaha did not make more than £5,000 from it.

Ms McAtasney then argued her defendant’s ‘previous good character’, including various charity work and the fact she has since built up a successful media career – as a Sky Sports assistant producer according to her LinkedIn profile.

The court was told her current employer was not aware of the case against her.

‘She has ruined her good name and will most probably lose her dream job,’ Ms McAtasney added.

Richard Butcher, defending Maqsood, similarly argued that his client has made strides to change his life by signing up to GAMSTOP to tackle gambling, starting a new business making cupcakes which employees five people, and was expecting his second child.

He said: ‘He is terribly ashamed.

‘He was hiding his gambling addiction from his family, from his wife, keeping it a secret from his close friends.

‘That was the root cause.

‘That was him two and half years ago.

‘Since that time he has done almost everything he can to put his life on an even keel.’

The court heard that both defendants were willing to pay compensation and that Marwaha had already saved £4,000 on top of the £1,500 which was seized when she was arrested.

Maqsood has transferred more than £28,000 to his solicitors.

Judge Paul Farrer QC, passing sentence, stated that while both defendants ‘blamed each other’ they were both ‘willing and enthusiastic participants in what was taking place’.

He added that Maqsood ‘undoubtedly received the lion share of the profits’.

However he concluded there was ‘significant mitigation’ for each of them.

Judge Farrer said Marwaha had since shown herself to be ‘well-liked, ambitious and hard-working’ whilst she had ‘matured considerably’.

Addressing Maqsood he said the ‘most compelling mitigation is what you have done with your life in the last two and half years’, including tackling gambling and starting a new business.

Both were sentenced to 22 months in prison suspended for two years for conspiracy to defraud. Marwaha was handed the same sentence for   charge of fraud by abuse of position which is to be served concurrently – at the same time.

She must also carry out 35 days of rehabilitation activity and 250 hours of unpaid work.

In Maqsood’s case he must complete 20 days of rehabilitation and 250 hours of unpaid work.

A Proceeds of Crime Act hearing, to determine any amounts to be repaid, will take place at a later date.