London is the third-most monitored city in the world and the only one in the top 10 outside China, a new study says.

The UK capital has nearly 630,000 surveillance cameras, or 67 cameras for every 1,000 people – a higher level of monitoring than in Beijing, Shanghai or Hong Kong.

Only the Chinese cities of Taiyuan and Wuxi are more extensively watched than London, while the UK capital’s closest rivals outside China are the Indian cities of Hyderabad and Chennai followed by Baghdad and Moscow.

The study by Comparitech found no other city in Western Europe even close to London, where police are rolling out the use of facial recognition technology which critics have called a ‘China-style mass surveillance tool’.

However, the study also found that ‘more cameras don’t necessarily reduce crime rates’ with London’s crime levels higher than those in less-monitored Berlin.

Experts say London’s CCTV network grew rapidly during the 1990s when London faced threats from the IRA and both major parties were jostling to be seen as tough on crime.

Britain has also seen a boom in privately-owned CCTV cameras, which are now thought to outnumber public surveillance cameras by as much as 70 to 1. 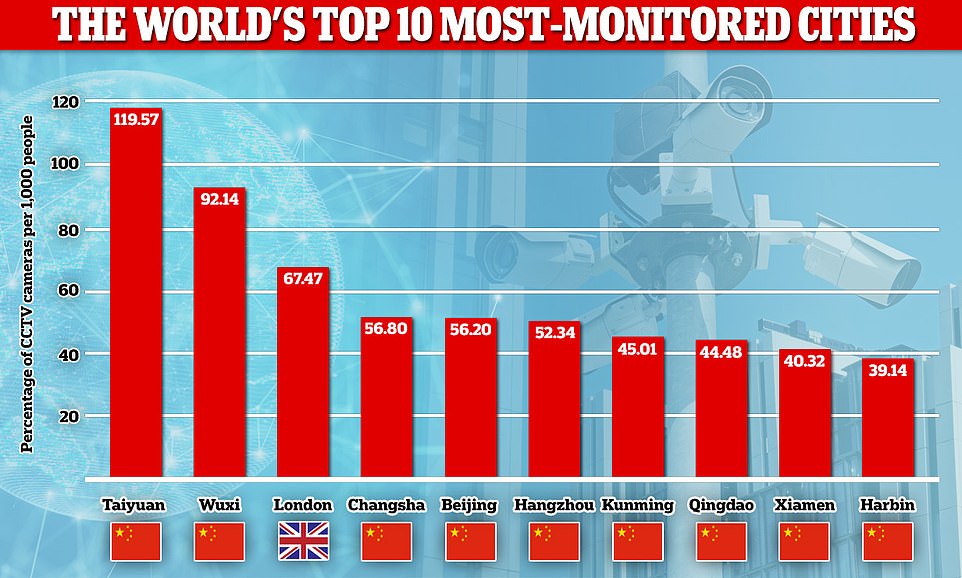 This chart shows the world’s top 10 most-monitored cities, measured by the number of CCTV cameras per 1,000 people. London is third in the world by this measure, the only city outside China to make the top 10

CCTV was first used temporarily in London during the Queen’s coronation in 1953 and started to be installed permanently in the 1960s.

Since then the city has frequently been a target for terrorists ranging from the IRA in the 1980s and 1990s to more recent attacks by Islamic extremists.

London has also faced the threats of hooliganism at its many sports grounds as well as crime on one of the world’s most extensive public transport networks.

A 2017 report by the Police Foundation said the 1993 murder of James Bulger in Liverpool, who was shown on CCTV being led away from his mother by his two 10-year-old killers, ‘undoubtedly’ fuelled support for more surveillance in the UK.

Before the Bulger killing, CCTV had mostly been used against traffic offenders but the case illustrated how it could be used more widely, the Police Foundation said.

The growth in CCTV has also been linked to both major parties’ desire to be seen as tough on crime, especially during the 1990s when then-opposition leader Tony Blair was trying to reform Labour’s image.

‘The populist view has consistently been that only criminals, or those with something to hide, would contest an increase in the use of cameras,’ the report argued.

The Information Commissioner’s Office has said that the Home Office spent 78 per cent of its crime prevention budget on installing CCTV during the 1990s.

More cameras were installed ahead of the London 2012 Olympic Games, just weeks after the Queen’s Diamond Jubilee which also required heavy security.

The Metropolitan Police said in 2018 that it owns only 3,000 cameras on the sides of buildings, saying that Transport for London is responsible for more CCTV than them.

However, the Met announced in January that they would begin the operational use of live facial recognition (LFR) cameras in London.

First used in the capital at the Notting Hill carnival in 2016, the cameras will alert police when they spot anyone on ‘wanted’ lists. The campaign group Big Brother Watch said last month that the use of live facial recognition was ‘one of the most serious threats to civil liberties of recent years’.

London transport bosses first experimented with CCTV while building the Victoria Line in the 1960s. From the 1970s onwards, it became a convenient way to phase out train guards on the Underground because drivers could monitor what was happening on CCTV.

The Tube network now has 13,000 cameras of its own, not including 700 on the Docklands Light Railway and 600 on the London Overground. London’s thousands of buses have also been fitted with their own surveillance systems since the 1980s.

Today, much of London’s suite of surveillance cameras is operated by private owners in their households or cars.

CCTV manufacturers can self-certify that their equipment is safe from cyber attack and companies offer home surveillance systems for less than £1,000.

UK regulations say that data protection laws do not apply if the cameras cover only a person’s private property, including their garden.

A 2015 study found that privately owned CCTV cameras may outnumber public ones by as much as 70 to 1 across the UK.

Comparitech says it is not fully clear how many privately-owned systems are included in the estimate of 627,727 surveillance cameras across London. A map of some of China’s most-monitored cities, although figures show Beijing has fewer CCTV cameras per head than London does

Outside China, London’s closest surveillance rivals are the Indian cities of Hyderabad (with 30 cameras per 1,000 people) and Chennai (with 26), followed by Baghdad (17) and Moscow (15).

Berlin is London’s closest rival in Western Europe, but the figure is only 17,464 cameras for 3.5million people or one for every five residents.

Germany’s privacy laws are notoriously strict and the government has warned that GDPR data regulations are a further restriction on private surveillance.

Madrid, Milan and Paris all have similar levels of surveillance to Berlin, a long way below that which is seen in London.

Some other global megacities barely register in the table, including Sao Paulo with only 0.22 cameras per 1,000 people or one for every 4,500.

China accounts for all but two of the top 20 places, with the most-monitored city – Taiyuan – having 120 cameras for every 1,000 people.

Taiyuan has upped its use of surveillance cameras quite significantly with 380,000 cameras being added in 2015 as part of its Skynet project, Comparitech says.

The study also found that there was only ‘barely’ a correlation between the number of cameras and a city’s crime rate.

For example, London’s crime rate is measured slightly higher than that in Berlin despite its vastly greater surveillance network.

Comparitech editor Paul Bischoff warned that China could use recent diplomatic rows over Hong Kong and the Uighur people to install even more surveillance.

Beijing is facing growing criticism over its tough new national security law in Hong Kong and its imprisonment of Uighur people in Xinjiang.

‘I don’t think the international backlash over Hong Kong, Uighurs, and coronavirus will deter the PRC from adopting more CCTV surveillance and face recognition,’ Bischoff said.

‘They could make an argument that more CCTV surveillance and face recognition can help curb all of these threats.

‘But as these supposed threats come and go, the cameras will remain, and China has few checks in place to reign in how authorities use them to restrict freedom of movement and assembly.’

The world’s most monitored cities: The top 100 by number of cameras per 1,000 people