A luxury £1.5million clifftop housing development has seen its value plunge by almost half a million pounds following a dramatic landslip.

Three new luxury homes were controversially been granted planning permission to be built on the edge of the 80ft cliff in Weymouth, Dorset.

Locals said the decision was ‘crazy’ due to the unstable nature of the cliff that has suffered a series of rock falls over the years.

Before building work could begin another large landslide occurred which has caused part of the coast road to be closed amid fears it could collapse. 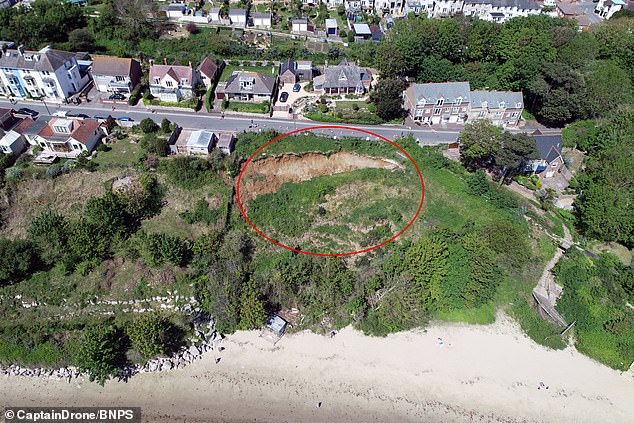 A clifftop housing development in Weymouth, Dorset, has seen its value plunge by following a dramatic landslip

Up to 90 other homes in the area face being cut off in the future if the land slips further.

C&L Developments own the large plot at the top of the cliff where they plan to build the trio of four bed homes that will have magnificent sea views and would have been worth at least £500,000 each.

But the developers are trying to off-load the project. They had put the whole plot up for sale for £1m but following the March landslip the asking price has been slashed to £600,000.

Residents of Old Castle Road in Weymouth said the cliff has been receding for the last 20 years.

In 2009 a significant landslip led to the loss of 6ft of the back garden of one property.

Yet in 2017 the then Weymouth and Portland Borough Council granted C&L Developments planning consent to build the new homes, believing the work would actually stabilise the cliff.

Objecting to the plans, Pru Bollam, the president of the Weymouth Civic Society, said: ‘We maintain our views as to the total unsuitability of any development on land above Castle Cove. 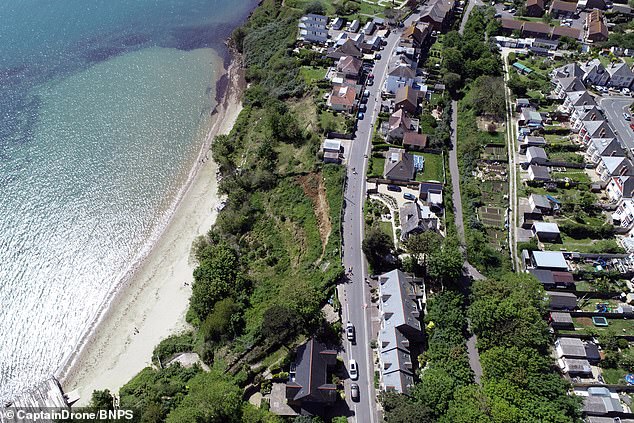 ‘We still have serious concerns regarding the instability of the land on this site and support the local plan, which aims to prevent development that might trigger landslides or subsidence within or around the site.’

One resident, who asked not to be named, said: ‘The land has slipped several times before and the properties on the seaward side of the road are at long term risk. It does seem crazy to think about developing the site.’

Another resident added: ‘I have lived here for a number of years and the cliff has been gradually moving back in that time.

‘I’m not worried about my own home but I’d imagine the new development might be at risk.

‘I’ve not seen anyone there for a while and now the owners are trying to sell it.

‘It has greatly reduced in value which I can only imagine is down to the rockfall and the position the homes would be in. 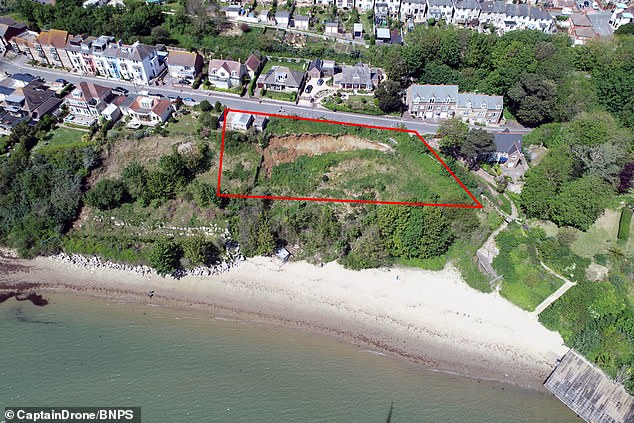 ‘Should the line of the cliff come back any further, the whole road could be facing some pretty serious access issues if the council close us off.’

But according to the 2017 planning report, the company had ‘demonstrated that the development will not have a negative impact on slope stability’ on the cliff.

It went on to state that the developers ‘say it will offer some protection for Old Castle Road.’

On its website, C&L say the development, called Chambers Cove, will be ‘the benchmark of luxury living’.

All the properties will have four bedrooms, balconies and access to their own stretch of the sandy beach below.

The current cliff edge remains 12ft away from the road with a sheer drop of 15ft beyond it.

Sandbags have been laid along the edge of the carriageway to divert rainwater away from the cliff.

Dorset Council is now in urgent talks to find a solution to stabilising or re-diverting the coast road.

A council spokesman said: ‘Due to the development land on Old Castle Road now being for sale, we have expediated the investigation into the landslip as there is now no timeframe for a development, meaning the slip could be left unattended for years.

‘Although the slip is on private land, the council is concerned about the effect it might have on the continued use of Old Castle Road.

‘We are looking into what alternative access could be provided if Old Castle Road had to be fully closed along the landslip area.

‘A specialised geotechnical consultant has also been contracted to collate and review all existing information on ground movement in this area, examine the current condition of the site and provide a professional opinion on the likely progress of cliff recession.’

John Burridge, bridges and structures team leader for Dorset Council, said: ‘We’ve placed sandbags along the edge of the road and across the end of the footpath down to the beach to ensure rainwater flows into highway drains.

‘This will stop water from the road flowing over the edge and having a detrimental effect on the slipped ground.

‘A report detailing the ground conditions and likely progression of the slip should be available to us by the end of June, we’ll then be able to plan what works are needed.’