An Arizona man alleged this week that he was wrongly jailed for 17 days after American Airlines falsely identified him as a burglary suspect to police. In his lawsuit, passenger Michael Lowe said he endured more than two weeks of an “unending nightmare” in a New Mexico jail as a result of the airline’s alleged actions.

The alleged incident began on May 12, 2020, when Lowe was flying from Flagstaff to Reno with a layover in Dallas. During the layover, there was a burglary at a duty-free store in one of the Dallas terminals — and police were able to trace the culprit onto Lowe’s plane from Dallas to Reno, the lawsuit said.

As a result, the lawsuit says, airport police obtained a search warrant “ordering American Airlines to produce any and all recorded travel data” for the flight’s passengers. The lawsuit said the affidavit from police “described the suspect as a tall and thin, White or Hispanic male with a short military style haircut, black polo shirt and blue jeans.”

But instead of providing the names of all the passengers, according to the lawsuit, the airline “departed from its established procedures” and only gave them one name: Lowe’s.

The lawsuit said the airline’s alleged decision to only provide one name “involved an extreme degree of risk.”

“This is especially true considering that it knew that if it provided the name of a single individual in response to the search warrant instead of turning over the entire flight manifest as ordered, it was highly likely that that individual would be arrested and imprisoned,” the lawsuit said.

The lawsuit does not explain why the airline would have only provided one name. American Airlines told CBS News it is reviewing the lawsuit.

The lawsuit said felony and misdemeanor arrest warrants were then issued for Lowe as a result of the airline’s actions, leading to his arrest more than a year later while he was vacationing in New Mexico on July 4, 2021.

While incarcerated in a New Mexico jail for 17 days, Lowe experienced what the lawsuit called an “unending nightmare.” The suit described a “palpable sense of menace” among the inmates he was housed with, saying he “lived in a constant state of fear of confrontation or abuse.” It also said he watched a young inmate get repeatedly punched in the face, faced “a near complete lack of sleep,” and watched guards refuse to provide medical treatment to a vomiting inmate.

Lowe was eventually released from the jail and allowed to return home — and upon arriving, the lawsuit said, he “allowed himself to sob until he could no longer stand.”

The charges against Lowe were eventually dismissed, the lawsuit said. But it alleged the experience left him plagued with fear, nightmares and anxiety, and has “shaken his identity to the core and cast a pall over his view of the world.” 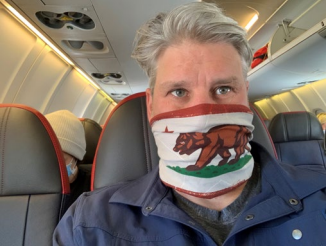 The lawsuit accuses the airline of negligence, negligent undertaking and gross negligence in providing Lowe’s name to authorities, alleging the airline undertook a “cursory and negligent” investigation of its passengers and acted “with conscious indifference to the rights and safety of Mr. Lowe.”

“American Airlines should have provided its entire flight manifest as ordered by the warrant or a list of all individuals who matched a certain description (ex: all white males over 18 and under 65),” the lawsuit said. “American Airlines also could have performed an adequate search to identify the correct suspect and provide his information to law enforcement. Instead, American Airlines, conducted its own negligent investigation, and wrongfully identified Mr. Lowe as the single suspect of the DFW Airport PD felony investigation which foreseeably led to Mr. Lowe being arrested and imprisoned for a crime for which he was innocent.”

Gas prices soar to new record highs, with the national average at almost $5

How the U.S. and its allies are responding to North Korea’s missile tests