Kyiv: The mayor of the Ukrainian port city of Mariupol says more than 10,000 civilians have died in the Russian siege of his city – and he expects the death toll to keep growing.

Mayor Vadym Boychenko said that with bodies “carpeted through the streets”, he predicted the eventual death toll could surpass 20,000. 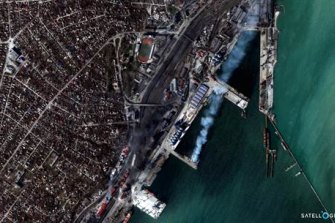 The port of Mariupol, photographed as it was attacked on April 6.Credit:Satellogic

In a telephone interview with the Associated Press, Boychenko confirmed earlier reports that Russian forces had been using mobile cremation equipment to dispose of the city’s bodies.

He said Russian forces had refused to allow humanitarian convoys into the city because they wanted to conceal the carnage.

The mayor’s comments emerged as Russia claimed to have destroyed several Ukrainian air defence systems in what appeared to be a renewed push to gain air superiority ahead of a fresh offensive in the east. 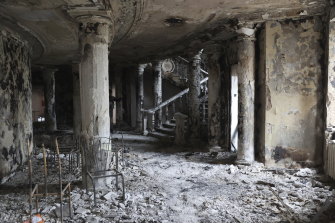 Moscow’s initial invasion stalled on several fronts as it met stiff resistance from Ukrainian forces. The failure to win full control of Ukraine’s skies has hampered Moscow’s ability to provide air cover for troops on the ground, limiting their advances and likely exposing them to greater losses.

With their offensive in many parts of the country thwarted, Russian forces have relied increasingly on bombarding cities – a strategy that has killed thousands of people and led to accusations of war crimes.

Ukrainian authorities accuse Russian forces of committing atrocities, including a massacre in the town of Bucha, airstrikes on hospitals and a missile attack that killed at least 57 people at a train station.

In Bucha on Monday, the work of exhuming bodies from a mass grave in a churchyard resumed.

Galyna Feoktistova waited for hours in the cold and rain to identify her 50-year-old son, who was shot and killed more than a month ago. Eventually, she gave up and went home to get warm.

The UN children’s agency said that nearly two-thirds of all Ukrainian children had fled their homes in the six weeks since Russia’s invasion began.

The United Nations has verified that 142 children have been killed and 229 injured, though the actual numbers are likely much higher.

In a statement released by his office, Nehammer said his primary message to Putin was “that this war needs to end because in war both sides can only lose.” 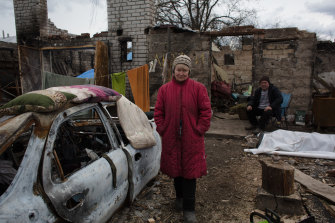 Iryna, 56, stands in front of her destroyed house in the village of Lukashivka.Credit:Getty Images

Neutral Austria, which gets 80 per cent of its natural gas from Russia, generally maintains closer ties to Moscow than much of the European Union, but that has not been the case since the Russian invasion. Nehammer’s government has joined other EU countries in expelling Russian diplomats and denouncing alleged Russian war crimes in Ukraine.

In other diplomatic movements on Monday, US President Joe Biden warned Indian Prime Minister Narendra Modi that it was not in India’s interest to increase its imports of energy from Russia.

Biden’s spokeswoman described the meeting as productive but not adversarial. Biden told Modi the United States stood ready to help India diversify its energy imports, given that India’s imports from the United States are already much larger than those from Russia.

Russia focuses on the east

On the ground in Ukraine, questions remained about the ability of depleted and demoralised Russian forces to conquer much ground after their advance on Kyiv was repelled by Ukrainian defenders.

Britain’s Defence Ministry said on Monday that Ukraine had already beaten back several assaults by Russian forces in the eastern Donetsk and Luhansk regions – which make up the Donbas – resulting in the destruction of Russian tanks, vehicles and artillery.

Western military analysts say Russia’s assault increasingly is focusing on an arc of territory stretching from Kharkiv, Ukraine’s second-largest city, in the north, to Kherson in the south.

A residential area in Kharkiv was struck by incoming fire on Monday afternoon. At least five people were killed, including a child.

Oleh Synyehubov, the regional governor of Kharkiv, said that Russian shelling killed at least 11 people in the previous 24 hours.

Get a note directly from our foreign correspondents on what’s making headlines around the world. Sign up for the weekly What in the World newsletter here.