Doting father Hussain Ali confesses there has been some “unlearning” to do to equip him with the skills needed as stay-at-home primary carer for 11-month-old Sebastian, his first child with wife Roesia Miranda, a doctor working in aged care.

Things that help in Mr Ali’s work as a joint-venture manager at an energy company – including “goal setting and being in control” – are less useful in his new role as stay-at-home dad, which he describes as “the most satisfying thing I have ever done”. 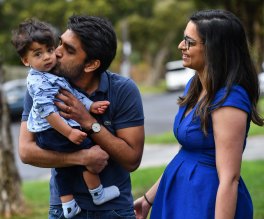 Hussain Ali says taking a large amount of parental leave to be primary carer for his son, Sebastian, as his wife Roesia returns to work as an aged-care doctor has been the most satisfying thing he has ever done.Credit:Joe Armao

“No amount of determination has helped me feed Sebastian his lunch when he is just not interested. My greatest reward has been developing a new set of skills … patience, calmness, empathy and adaptability,” says Mr Ali.

After spending a month on parental leave after Sebastian’s birth last year and three months (and one to go) this year as carer, Mr Hussain’s message for other fathers is “be mindful of making the decision you are least likely to regret”.

He realises he is privileged his employer, ExxonMobil, offers fathers good leave options, but like many men considering taking time out from conventional careers to share care of children, he factored in the stigma that remains about them doing do. Though primarily focused on career pre-Sebastian, he concluded “for me, this is the choice I knew I wouldn’t regret”.

If recommendations in a Grattan Institute report that seeks to revolutionise paid parental leave in Australia are adopted, millions more men would have similar options to Mr Ali. 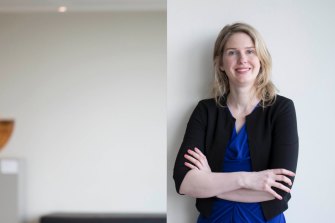 The Grattan Institute’s Danielle Wood said boosting paid parental leave to 26 weeks that could be split between parents would flow on to $900 million boost to the GDP.Credit:Arsineh Houspian

Out on Sunday, the report Dad days – How more gender equal parental leave could improve the lives of Australian Families, by CEO Danielle Wood and Owain Emslie, highlights that Australia has one of the least generous paid parental leave schemes in the world, entrenching women as carers and men as earners and limiting the life choices of both (and the economy).

Making paid parental leave more gender-equal by boosting it from the existing 18 weeks, focused on mothers, to 26 weeks that can be split between partners – six weeks for each parent, 12 weeks either could use and a bonus two weeks if each up takes a minimum of six weeks – would help men feel it is normal to share care, improve relationships and parental satisfaction for men and women and boost workforce participation, the report says.

It would cost $600 million but would return $900 million a year to the GDP thanks to increased workforce participation by mothers, “boosting the average mother’s lifetime earnings by $30,000”. 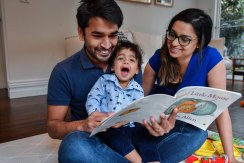 Hussain Ali says skills he has learned as stay-home father to son Sebastian, while his wife Roesia works as an aged-care doctor, will improve him as a person and professional.Credit:Joe Armao

Parents would continue to be able to use their leave entitlements concurrently or separately, to best meet their family’s needs and sole parents would get the whole 26 weeks.

Grattan Institute CEO Danielle Wood said changes to the parental leave system have to be big enough to shift a culture based on women as carers.

“We think particularly when supercharged with the two weeks bonus leave (which requires fathers to use their basic six-week entitlement) is big enough to shift behaviour and start a cultural shift.

“When fathers are more involved in those early years … and are feeling more engaged, they’re part of a caring culture around the child, and with every man who takes some leave it is easier for others to take leave, employers come to expect it and men are less likely to face a career penalty if they do it.” 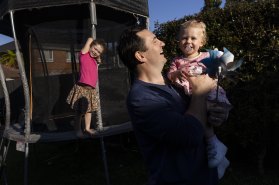 Sydney father and carer Nick Duffy, with daughters Louella and Harriet, said it is important for male leaders who are also fathers to lead by example and take parental leave if they can.Credit:Brook Mitchell

Closer family engagement of fathers leads to greater life satisfaction for fathers as well as mothers, she said, and as more fathers take parental leave it is “more enjoyable because there are other dads [in playgroups and generally] on leave”.

“This is a circuit breaker that would shift a norm that makes it really hard for men who would like to, and would share care.”

Associate professor Elizabeth Hill, of the University of Sydney’s department of political economy, said her research shows young men want the opportunity to be more actively involved in their children’s care and that access to paid parental leave “is essential to their future success at work”.

“Paid parental leave policies that encourage and incentivise shared responsibility for care of children in the early years are critical to achieving gender equality at work and at home,” she said.

In countries where paid parental leave is provided as an individual entitlement on a “use it or lose it” system there is greater division of work at home and in employment and the status of care-giving is increased.

Father and safety and wellbeing manager Nick Duffy said the bonding time and chance to form routines with his daughters, Louella and Harriet, for whom he has both been carer thanks to paid parental leave policies at his employer, were two of the greatest things about being around in the girls’ first years. 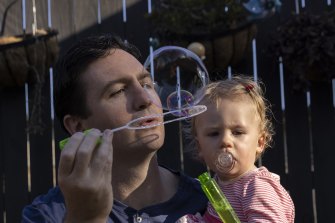 Nick Duffy with daughter Harriet, for whom he took 10 weeks of as primary carer in her first year.Credit:Brook Mitchell

“I think men have a responsibility to be involved at that point, it’s such an important thing and is just so enjoyable,” said Mr Duffy, who took 10 weeks’ leave each time. While some men tell him, “Oh, mate I just can’t do that”, due to the nature of their work, he wants fathers to understand what is at stake.

“Having two kids, you only get two shots at it, you don’t get it again so you’ve got to have a crack. And if you don’t do it properly, on an individual level, what is the impact on the rest of the family? It’s your own opportunity but it’s also the impact you have on other people, the family dynamic, that you’ve got to consider.”

Transforming paid parental leave to be more inclusive of fathers “makes sense as a manager, it makes health sense and economic sense”.

Georgie Dent, executive director of The Parenthood, said the Grattan Institute’s proposal would help create patterns of shared care that would benefit the health of parents, children and families.

“If you have two parents who are meaningfully engaged carers who combine family and work, that’s the pattern that will persist over the long term,” she said.

“It is fantastic for children, they benefit from more engagement of fathers, and it’s better for women’s participation in paid work, their mental health and economic security.″⁣

“Together with affordable access to childcare, shared parental leave entitlements will have a direct impact on women’s workforce participation, women’s leadership and business performance. Importantly, such policies enable men to experience care … which we know young dads especially are keen to participate in.