A MUM has revealed a close encounter with a big cat wealthy residents are calling the ‘Beast of Billionaires’ Row’.

Laura Rosefield thought she had seen a “mini leopard” as she watched her son play cricket in Crouch End, North London. 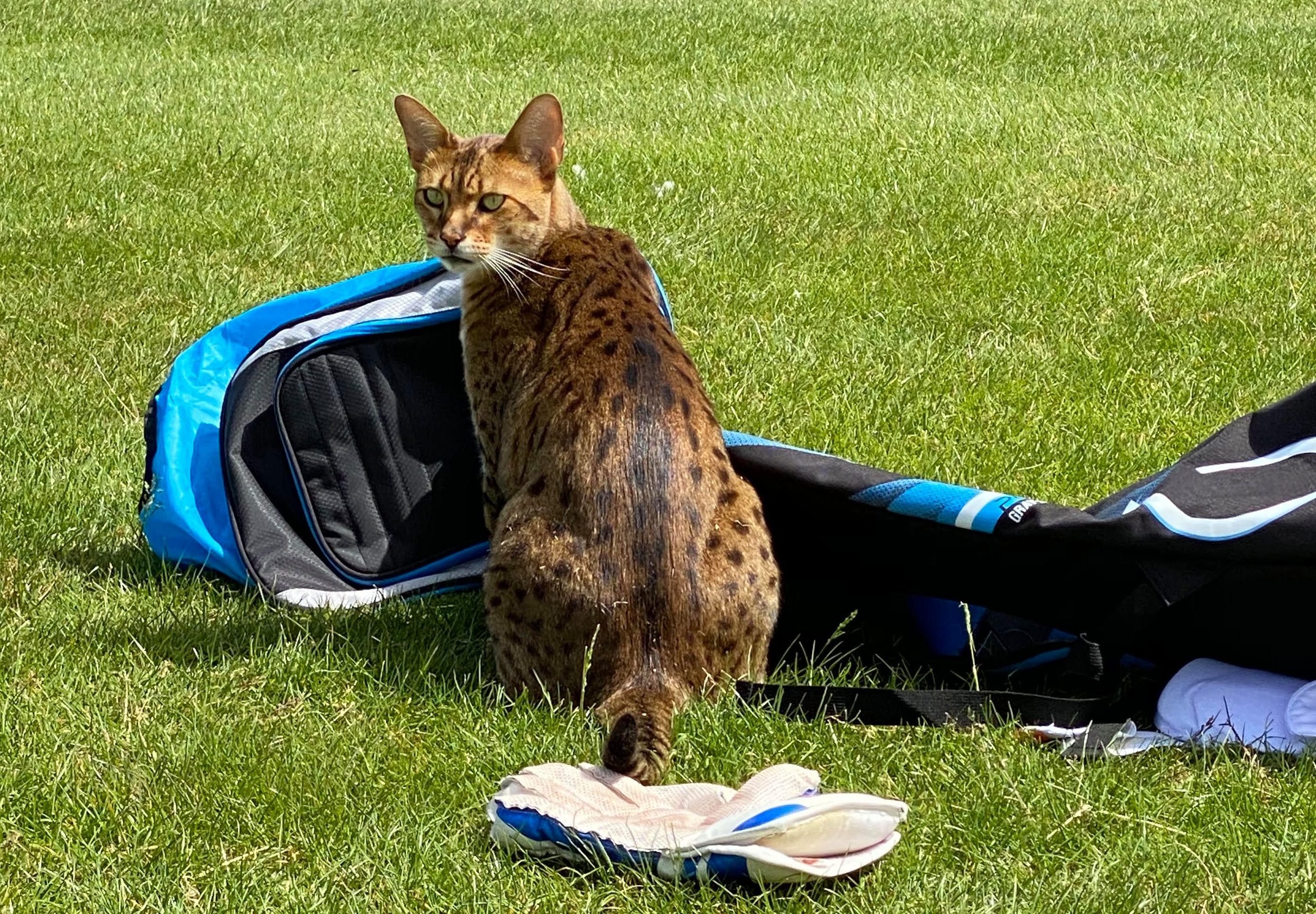 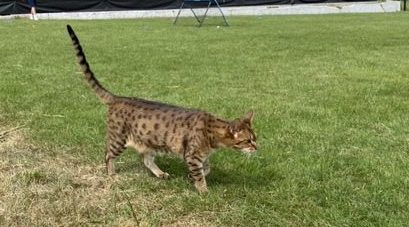 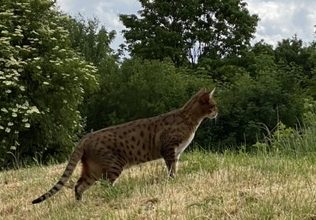 It comes after a 'big cat' was spotted in North London on Monday night, prompting an armed response from cops with machine guns.

Locals claimed they had seen a 'cheetah' or 'large cat' after the feline prowled in gardens in the wealthy suburb.

But Laura said the animal she spotted – which may have been the same creature – wasn't as big as first feared, and was even friendly.

The divorce lawyer said the “beautiful” big cat prowled around the family before coming over for a closer look.

I suddenly went 'oh my god what is that?' and we saw the cat and aid 'it's a leopard, it's a mini leopard'.

Revealing the moment she spotted the feline, the stunned mum told SunOnline: “I suddenly went 'oh my god what is that?' and we saw the cat and said 'it's a leopard, it's a mini leopard'.

"My partner stroked it and it purred along while he was stroking it.

"It didn't have a collar and I thought that's odd for a house cat.

"It was definitely bigger [than a regular house cat] but it was very tame. There were kids playing with balls nearby and it wasn't bothered in the slightest.

"It didn't show any aggression."

One expert believes the cat is a domesticated Bengal cat – a favourite of wealthy owners for its leopard-like markings.

Big cat investigator Frank Tunbridge told SunOnline: "It's a Bengal cat, it’s a domestic. Unlike the Savannah which can be quite a handful.

“They are cross between a leopard cat and a domestic breed. They shares the markings of a leopard which is why people often say ‘look at that’. 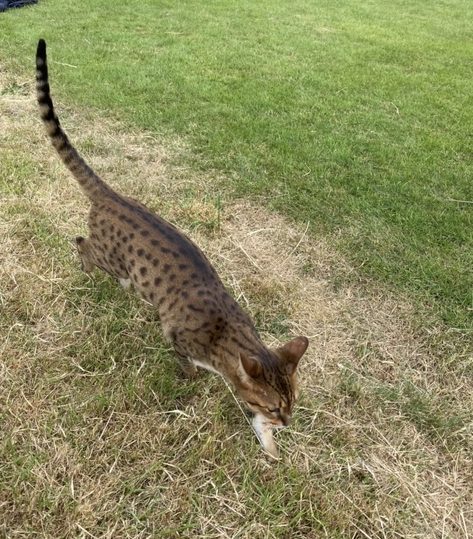 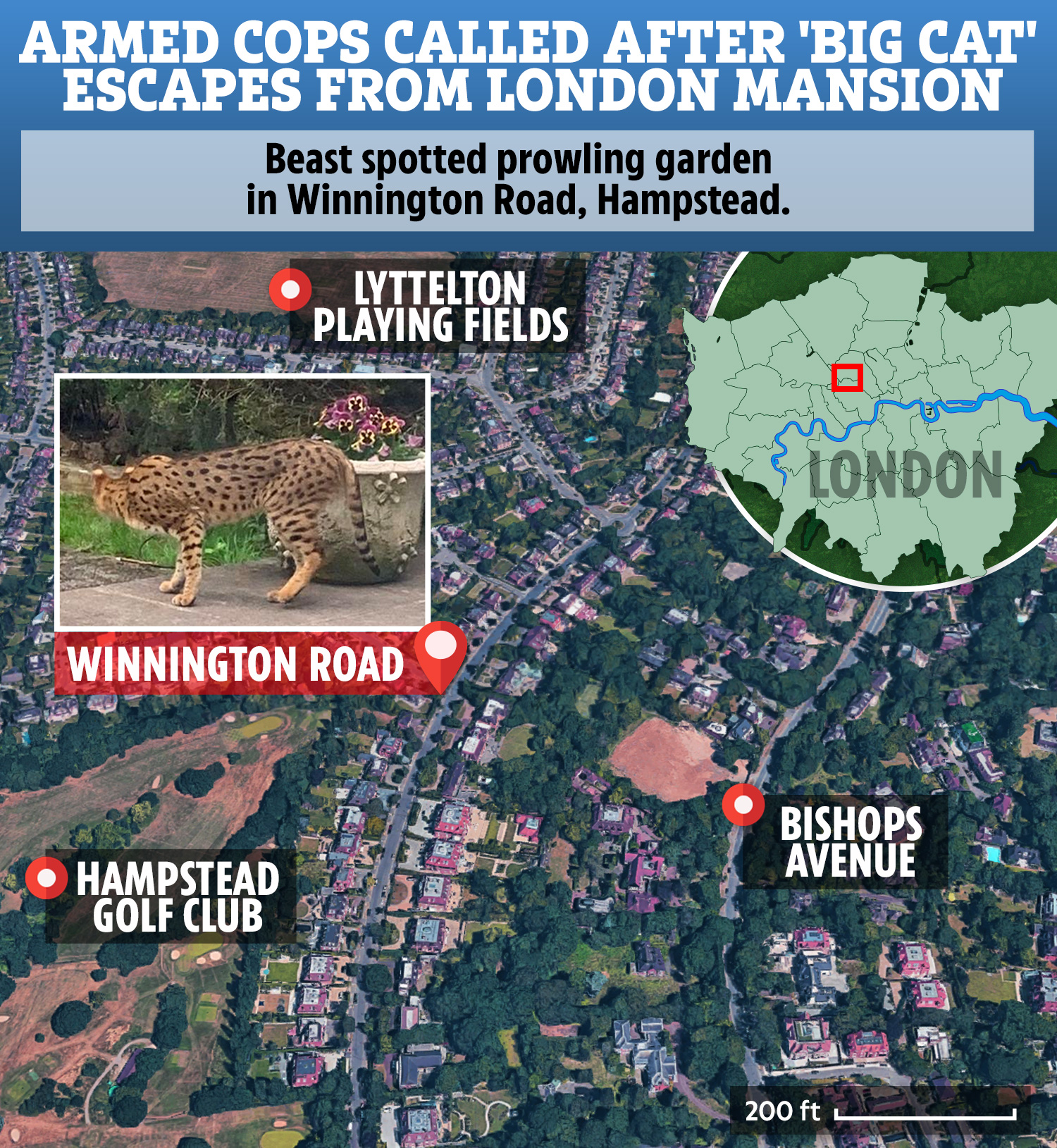 Big cat investigator Frank Tunbridge believes there could be a number of “wild” cats roaming around North London.

He told SunOnline: “In affluent areas people have a lot of money to spend and want pets that look different so they go for these Savannah cats.

“You get different types and people always want the ‘ultimate’ breed but then they realise they have more on their hands than they can handle.”

Mr Tunbridge added: “A Savannah is an African Serval crossed with a domestic cat – the first cross is 50/50 and is basically half a wild animal.

“They’re very cute when they’re young, but when the animal grows up it reverts to its semi-wild instincts and attacks the kids, scratches the dog, attacks neighbours’ cats.

“Which is why in North London you see so many in the wild and they can live quite well with voles, mice and pigeons around.

“I think there are more of these in London that we know.”

The exotic feline sending ripples of fear through Hampstead has also been likened to a pet Savannah cat, a mix between an African Serval and a domestic cat, that has escaped from a home nearby.

But yesterday a billionaire claimed the beast on the loose looked like a cheetah after armed cops searched his garden.

Nirmal Sethia revealed officers swooped on Bishops Avenue, known as "Billionaire's Row", last night with machine guns and cornered the escaped cat in his property – before it gave them the slip.

They identified the cat, hidden behind in the bushes and made its way along the back of my garden. Police said it could be a cheetah.

But Mr Sethia, 78, says the cat sightings have made him fear for the safety of his two-year-old twin grandchildren who are living with him and their parents.

He explained that armed cops descended on his garden to search for the animal – believed to be a Savannah cat – at 9.30pm on Monday.

Mr Sethia said: "Most of them had guns, some had machine guns. Some had electronic tasers.

"Slowly more and more people started coming and about 12 police, then 15 to 20.

"They identified the cat, hidden behind in the bushes and made its way along the back of my garden.

"Police said it could be a cheetah."

The Newby Teas tycoon added: "Why did they allow it to escape?

"I believe it was an excuse [to say it was a Savannah cat]. If you look at the picture, it's a cheetah.

"For those that don't know what's going on, it's a terror. I have two, two-year-old grandchildren. It's scary."

Other neighbours said they were nervous about letting their children or small pets out in their gardens.

One woman, who only gave her name as Maria, said: "I'm not letting my puppy out in the garden, that's for sure, until I know it's found."

The Metropolitan Police has tried to comfort the public by saying it was not deemed a danger and no attacks had been reported. 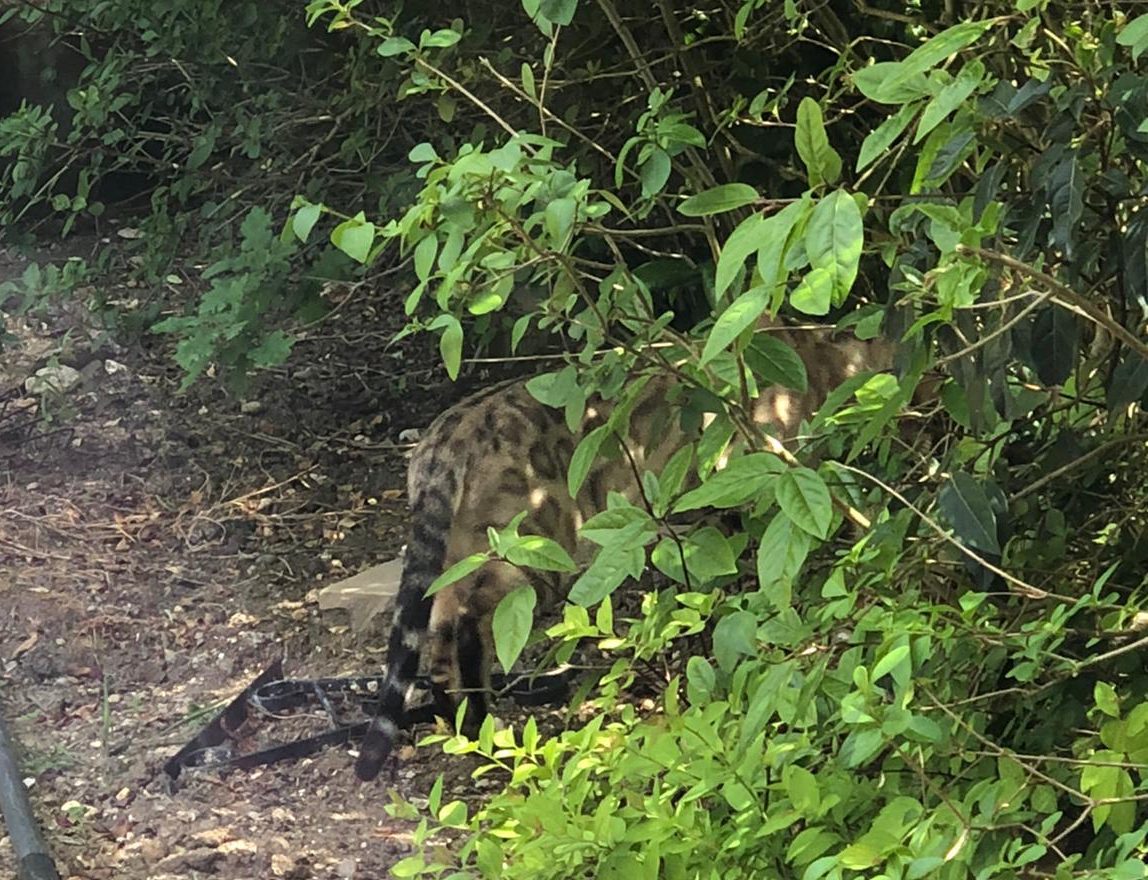 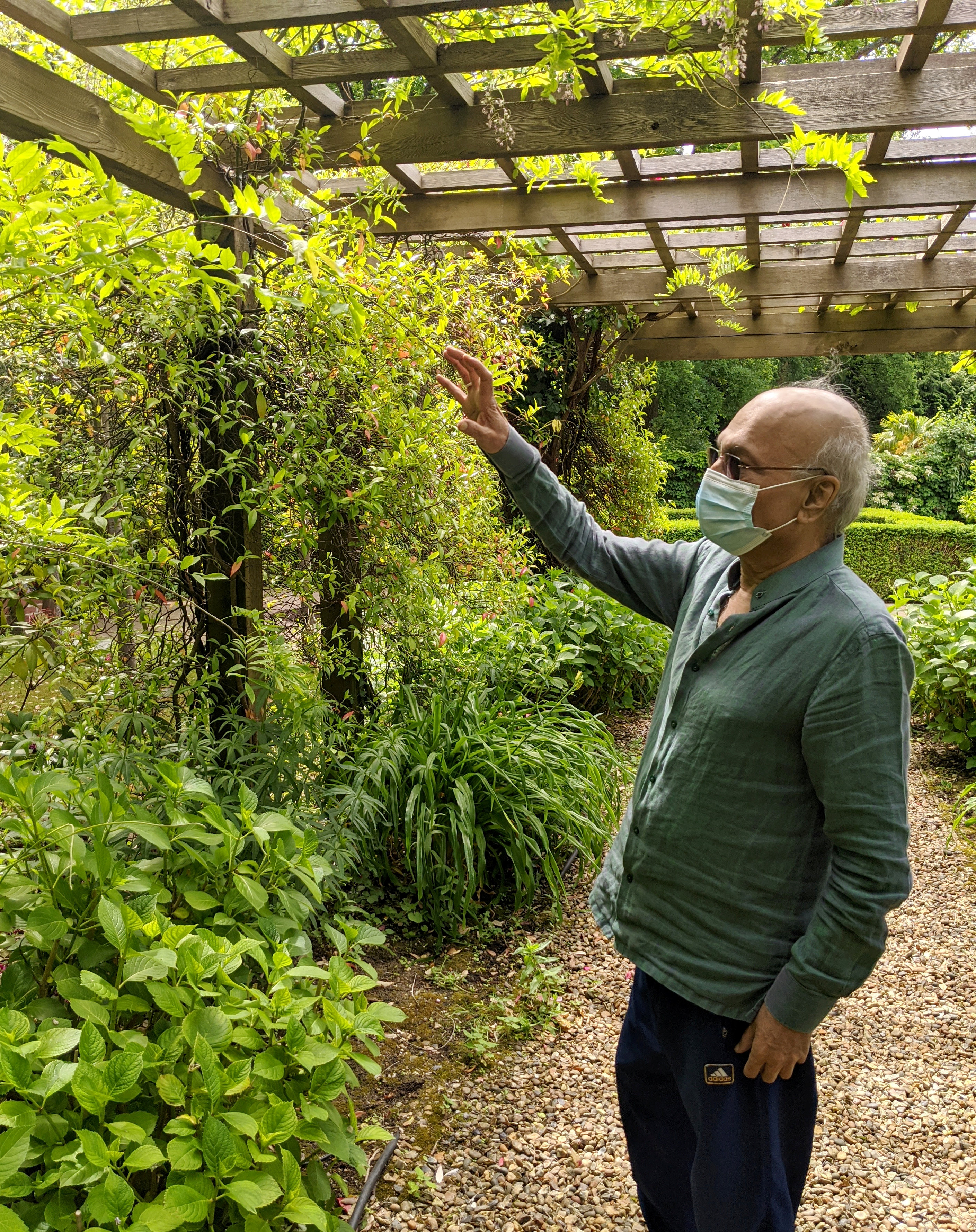 A spokesperson said: "Officers attended the scene. An animal expert also attended and visually assessed the cat; it was concluded the animal was not thought to be dangerous or a threat to the public.

"The cat made off from the garden; enquiries continue to locate it."

A picture taken by a local, as the cat stalked around their garden, showed the beast arched up on all fours as if it was ready to pounce on prey.

Savannah cats are seen as attractive, exotic pets by owners and were first bred in the UK in the 1980s.

Males can grow up to 16inches while the average height for a domestic cat is just under 10inches.

Serval cats and other wild breeds are illegal in the UK but are often kept in private zoos similar to those shown on Netflix’s Tiger King.

Monday's sighting was not the first time a big cat has sent a ripple of fear through Hampstead.

Last year a panicked mum was forced to save her two young children from a ferocious “supercat” as it stalked them in their garden.

Dr Neetu Nirdosh hurled a toy at the spotted beast as it snapped at the petrified kids.

In August, a photographer claimed to see a dog-sized cat prowling around the Yorkshire countryside.

Several people claim to have seen the 'Beast of Ossett' which has been spotted prowling in the woodland and fields around the West Yorkshire town.

There have also been a number of alleged sightings of the 'Wildcat of the Wolds' near Driffield, East Riding, Yorkshire, where incidents of mutilated livestock were reported as well.

Back in 2016, Lee Clifford thought he had captured a photograph of a wildcat roaming the countryside near Hull. 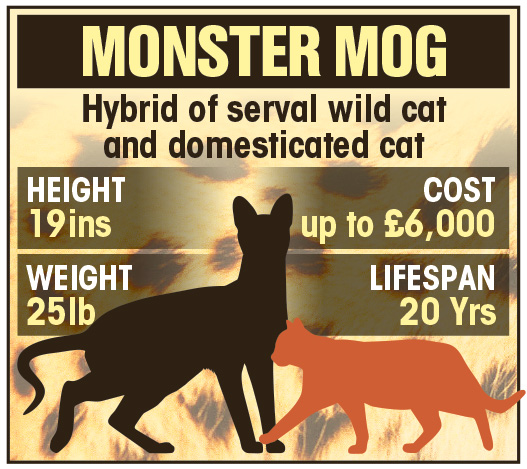 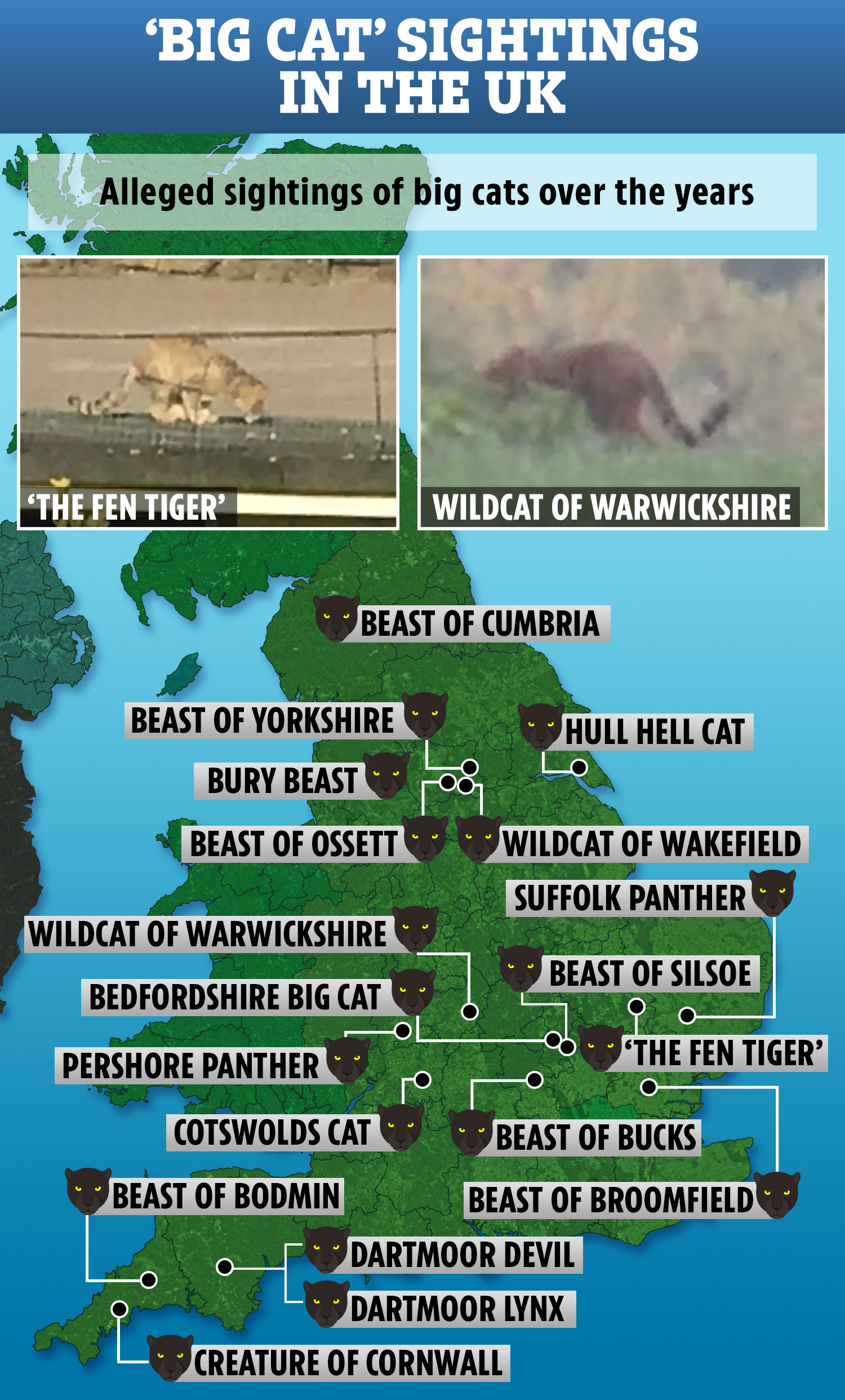 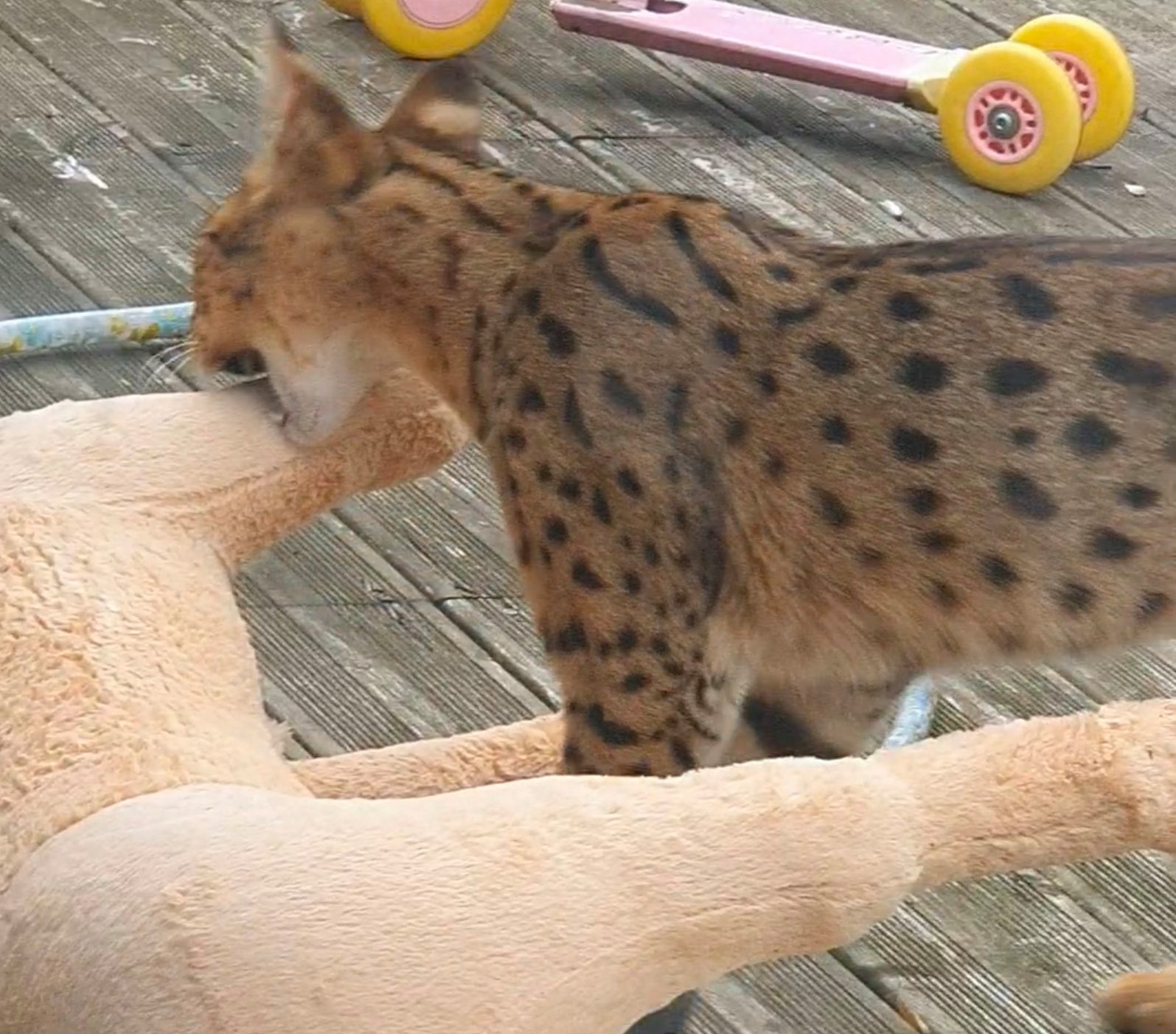