Washington: The Trump administration has refused to allow members of President-elect Joe Biden's transition team to meet with officials at intelligence agencies that are controlled by the Pentagon, undermining prospects for a smooth transfer of power.

The impasse has prevented the Biden team from engaging with leaders at the National Security Agency, the Defence Intelligence Agency and other military-run spy services with classified budgets and global espionage platforms.

The Defence Department rejected requests from the Biden team this week, officials said, despite a General Services Administration decision on November 23 that cleared the way for federal agencies to meet with representatives of the incoming administration. 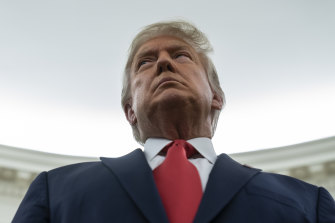 President Donald Trump has said he would leave the White House if the Electoral College cast votes for Biden. Credit:AP

On Saturday afternoon (ADST) California certified its presidential election and appointed 55 electors pledged to vote for Democrat Joe Biden, officially handing him the Electoral College majority needed to win the White House. The members of the College will cast votes on December 14 – normally a technicality, but outgoing President Donald Trump, who disputes the result and makes false claims of electoral fraud, has said he will leave the White House if the college ratifies the results.

The rejections came even as Biden advisers spent much of this week meeting with officials at the Office of the Director of National Intelligence and the CIA, agencies that are part of the US intelligence community but independent of the Defence Department.

Sue Gough, a Defence Department spokeswoman, said Friday that the Biden team "has not been denied any access". In what officials in the Biden camp interpreted as a change in the Pentagon position, she said the requested meetings could take place as early as next week.

By then, Biden advisers will have waited more than a month since the election to have meaningful contact with intelligence agencies that have multibillion-dollar budgets, satellite networks that circle the planet and vast surveillance authorities.

The delays have added to the unprecedented tensions surrounding the transition, fueled by a President who refuses to concede that he lost the election and spent much of his tenure accusing the nation's spy agencies of disloyalty to him.

A spokesman for the Biden transition team declined to comment, as did officials from the NSA and DIA.

The Pentagon has been in significant turmoil since the election. Acting secretary of defence Christopher Miller was installed last month after President Donald Trump fired Mark Esper, his Pentagon chief.

Current and former officials, who spoke on the condition of anonymity to discuss a sensitive matter, said the delays have impaired the Biden team's ability to get up to speed on espionage operations against Russia, China, Iran and other US adversaries.

The inability to meet with the NSA was described as particularly worrisome. The agency is the largest US intelligence service and its eavesdropping capabilities have been a critical source of intelligence on threats as varied as weapons proliferation and foreign interference in elections.

One person said the Pentagon had asked repeatedly for rosters of those who would take part in a visit, lists of topics and estimates of time to be allotted – information that in some cases had been provided at the outset.

"If they were in a cooperative mood, none of this would be happening," said another person with knowledge of the interactions.

Pentagon officials in turn blamed Biden advisers. One defence official, who spoke on the condition of anonymity, citing the sensitivity of the subject, said that Biden transition officials had improperly contacted agencies directly to arrange visits and briefings and were told that they instead needed to submit requests to the Pentagon.

The result has been an awkward standoff in which former officials were spurned by agencies they formerly helped run. Among those ex-officials is Vincent Stewart, a retired three-star US Marine Corps general who previously served as Defence Intelligence Agency director and is a leading member of the Biden intelligence transition team.

Other spy agencies have been far more receptive. At the CIA, the Biden transition team has been granted extensive access to senior officials, computer equipment connected to the agency's classified systems, and office space at Scattergood, a historic homestead on the CIA compound often used for entertaining VIPs.

Understand the election result and its aftermath with expert analysis from US correspondent Matthew Knott. Sign up to The Sydney Morning Herald‘s newsletter here, The Age‘s here, Brisbane Times‘ here and WAtoday‘s here.

Related posts:
LyfeStyle News:
Instagram Exec Not Yet Satisfied With Reels, Acknowledges TikTok Is Ahead
This Mom's In-Laws Want Her to Name Daughter After Husband's Dead Wife
House decorated almost entirely in shades of GREY on sale for £850,000
The Real Reason Ashley Biden Keeps Her Social Media Private
Tokyo Olympic Games ‘unlikely’ to happen says London 2012 organiser
Recent Posts
This website uses cookies to improve your user experience and to provide you with advertisements that are relevant to your interests. By continuing to browse the site you are agreeing to our use of cookies.Ok