Lima: Peruvian doctors have begun a hunger strike as a protest against the substandard working conditions that medical workers say they have faced in fighting the coronavirus pandemic.

The protest in Peru's capital Lima by at least four doctors, is the latest action by healthcare workers asking the government to improve their work environment. Medical personnel have been protesting for a week just as a second wave of coronavirus cases is hitting the country.

“We are concerned about the abandonment of our doctors, the lack of good working conditions,” said Dr Teodoro Quiñones, who is secretary-general of the union representing public hospital doctors. 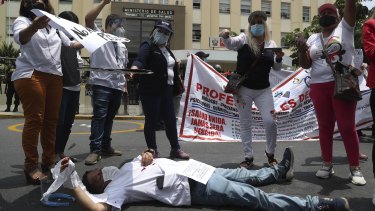 A doctor lies on the street as she allows blood to drip from her hand during a protest outside the Health Ministry headquarters in Lima, Peru, last week. The protest has now extended to a hunger strike.Credit:AP

Quiñones, who joined the strike, said he would remain in a makeshift tent outside the Ministry of Labour and Ministry of Health. On Wednesday (Thursday AEDT), he rested on some mattresses in the middle of the street and was hooked up to an IV with fluids.

Decades of underinvestment in public health measures have left Peru as one of the countries in South America with the fewest intensive care beds. The entire country, which has a population around 32 million, has only 1656 ICU beds. That is less than the 1800-plus beds available in Bogota, a city of 7.4 million people that is the capital of neighbouring Colombia, according to official data.

Doctors, nurses and technicians are working under intense pressure, balancing the risk of getting infected, stress and sleep deprivation.

Peru has tallied 1,073,214 coronavirus cases and 39,044 COVID-related deaths as of Tuesday, according to data from the Ministry of Health.