End of an era: Prince Charles touches down in Barbados to remove the Queen as head of state after Caribbean nation decided to become a republic

Prince Charles landed in Barbados on Sunday night ahead of a ceremony removing his mother, the Queen, as head of state.

The Prince of Wales will highlight the shared goals and enduring bonds between Barbados and the UK during a ceremony marking the Caribbean country’s transition to a republic on Tuesday morning.

It will also remain a part of the Commonwealth of Nations, a loose organization of former British colonies which is headed by Queen Elizabeth.

Charles arrived in Barbados on the ministerial jet Voyager late on Sunday night local time, and was greeted by a large diplomatic party led by Britain’s high commissioner to Barbados, Scott Furssedonn-Wood.

Barbadian prime minister Mia Motley and military chiefs lined a red carpet and were introduced to the prince.

Also part of the welcoming group was a Guard of Honour and military band, and a deafening 21-gun salute rang out across the Grantley Adams International Airport to mark the prince’s arrival. 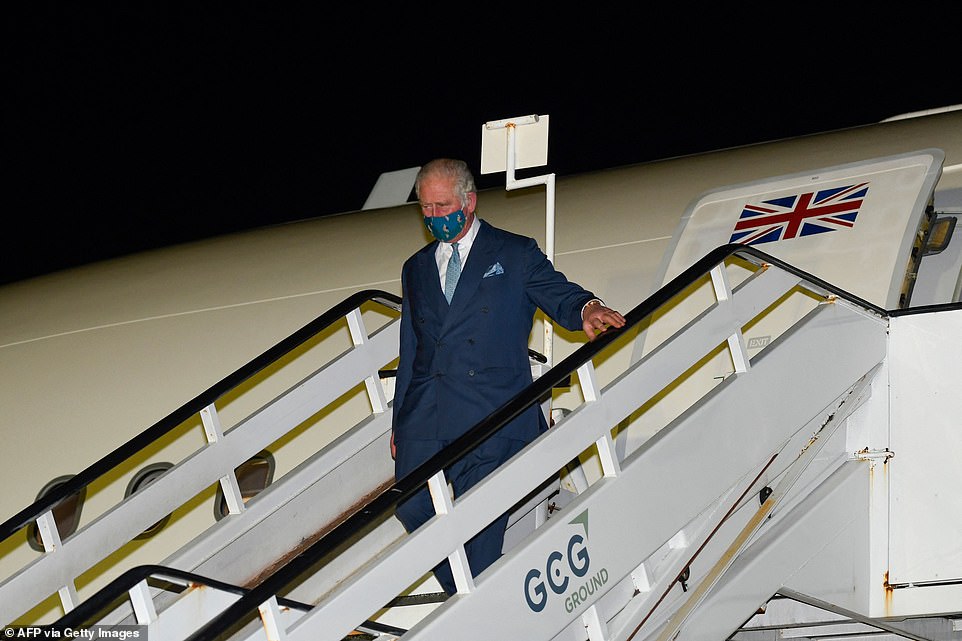 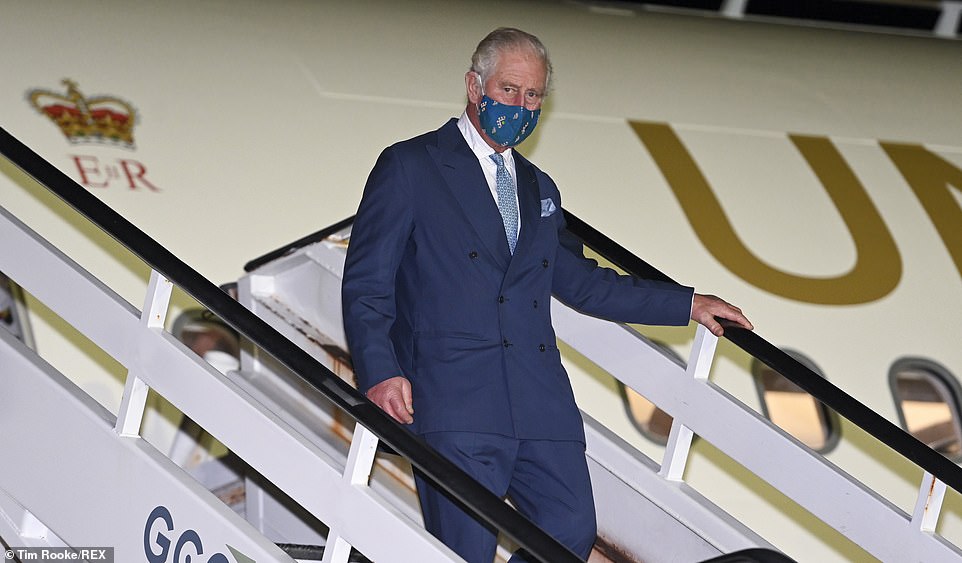 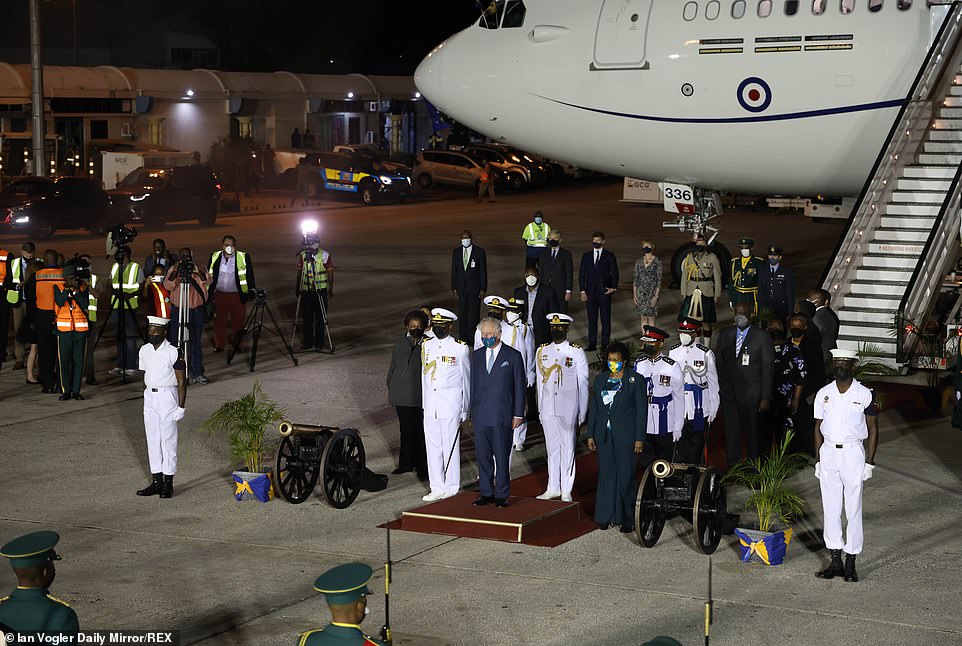 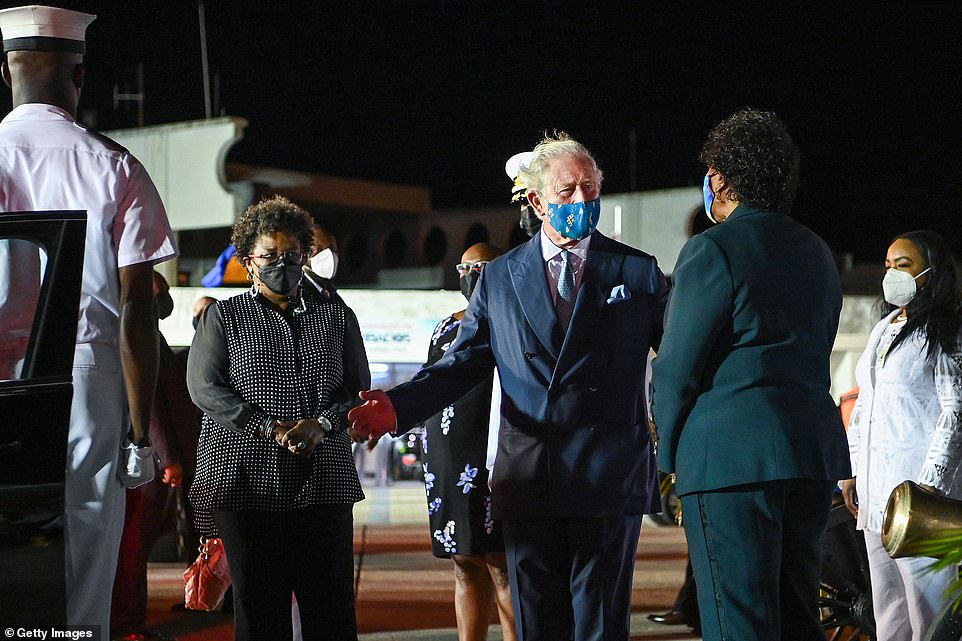 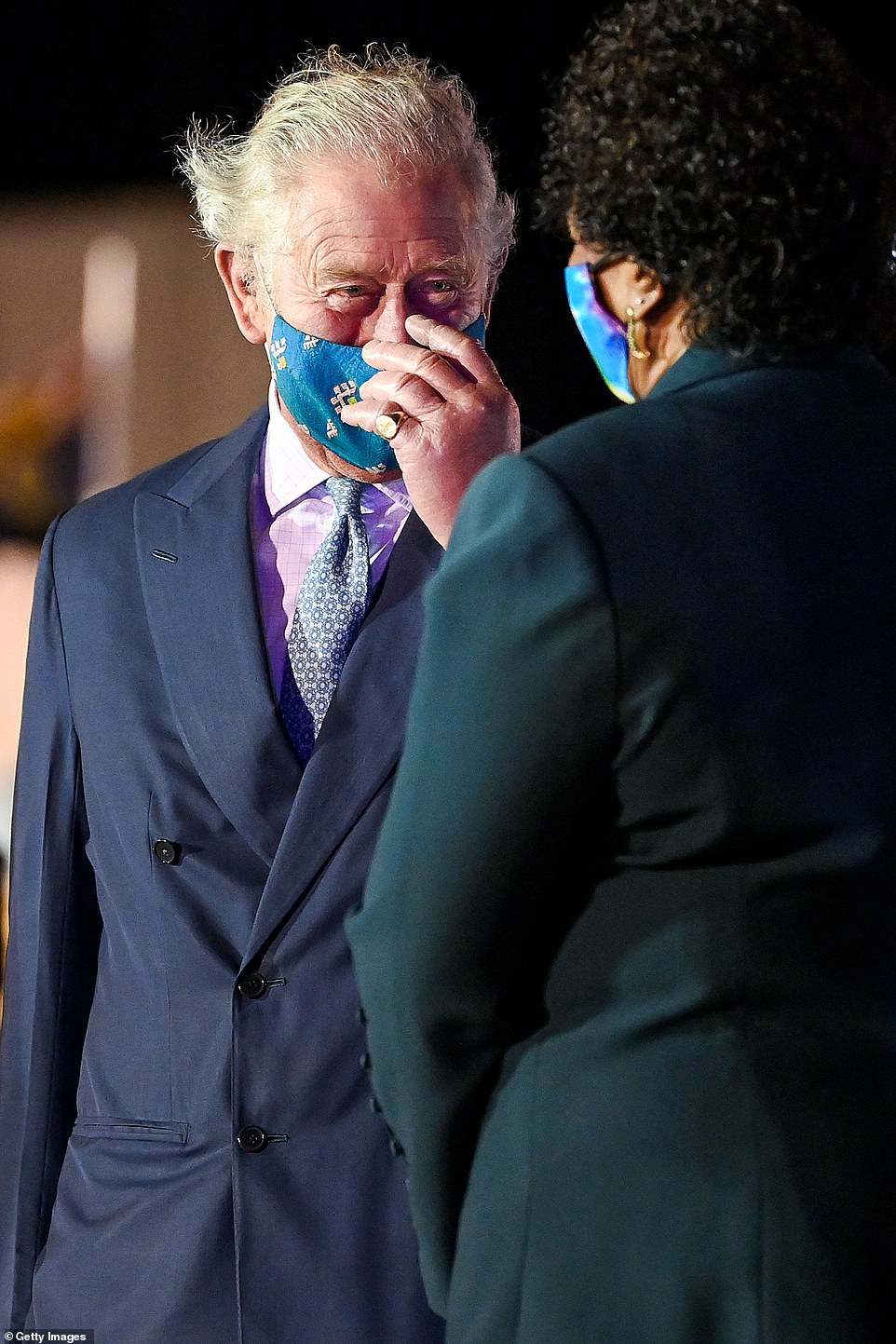 The 73-year-old was all smiles as he greeted Dame Sandra, who will replace his mother as head of state

Charles will also tell the nation it is ‘important’ for him to attend the event, being staged in the capital Bridgetown, to ‘reaffirm those things which do not change’ as the major constitutional shift takes place.

The heir to the throne will deliver his address just after midnight, local time, as Barbados begins a new chapter in its history on November 30 – the 55th anniversary of independence from Britain – after its first president Dame Sandra Mason is sworn in.

Barbados’s decision to remove the Queen as head of state will be watched closely by other members of the Commonwealth especially in the Caribbean region.

During the ceremony in National Heroes Square, Charles is expected to say: ‘As your constitutional status changes, it was important to me that I should join you to reaffirm those things which do not change.’ 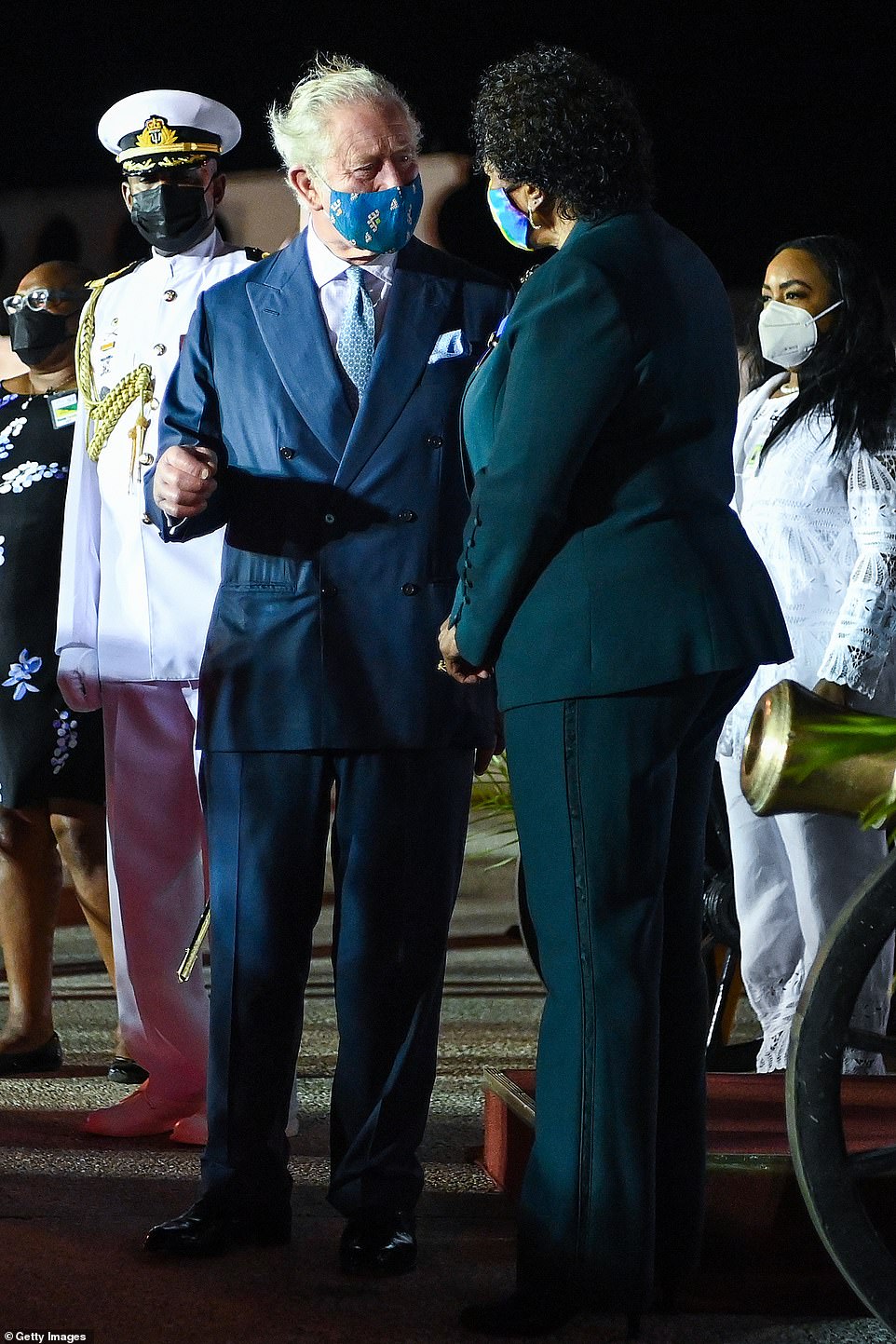 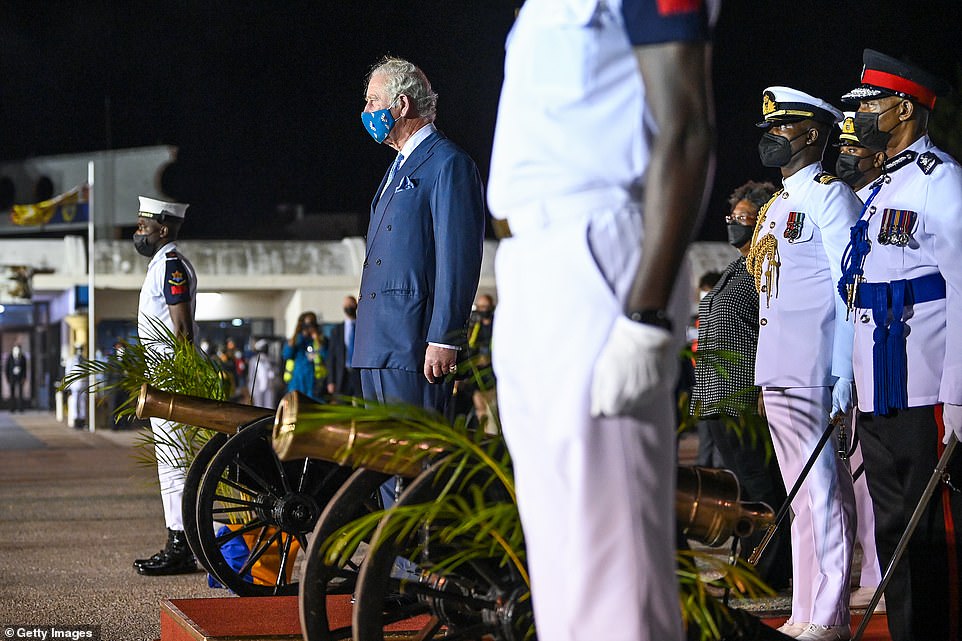 The handover will be officially performed at a ceremony in National Heroes Square. Charles is seen on Sunday night, arriving in Barbados 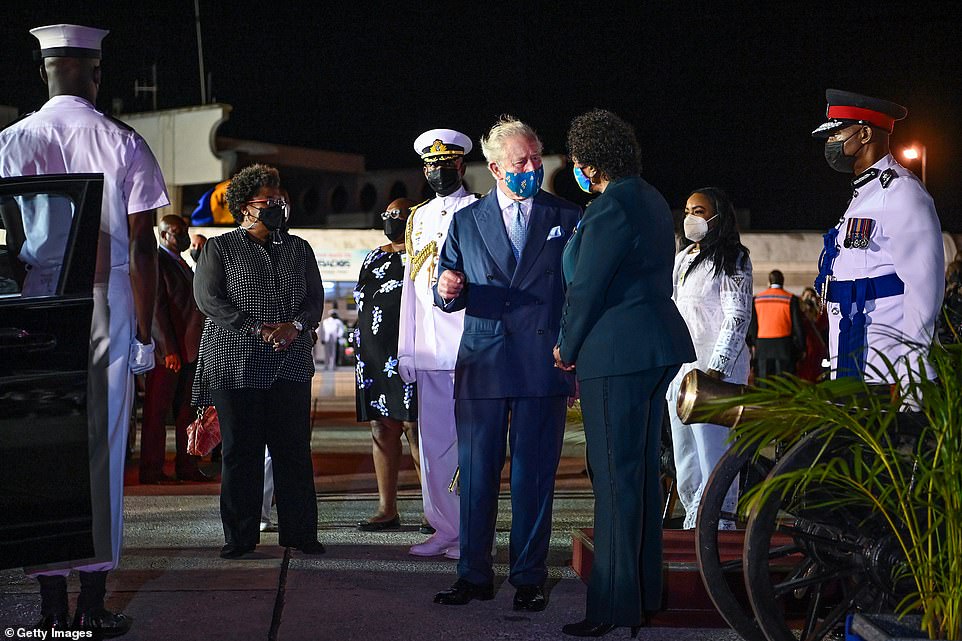 The prince was seen in animated conversation with Dame Sandra, who will be the first president of Barbados 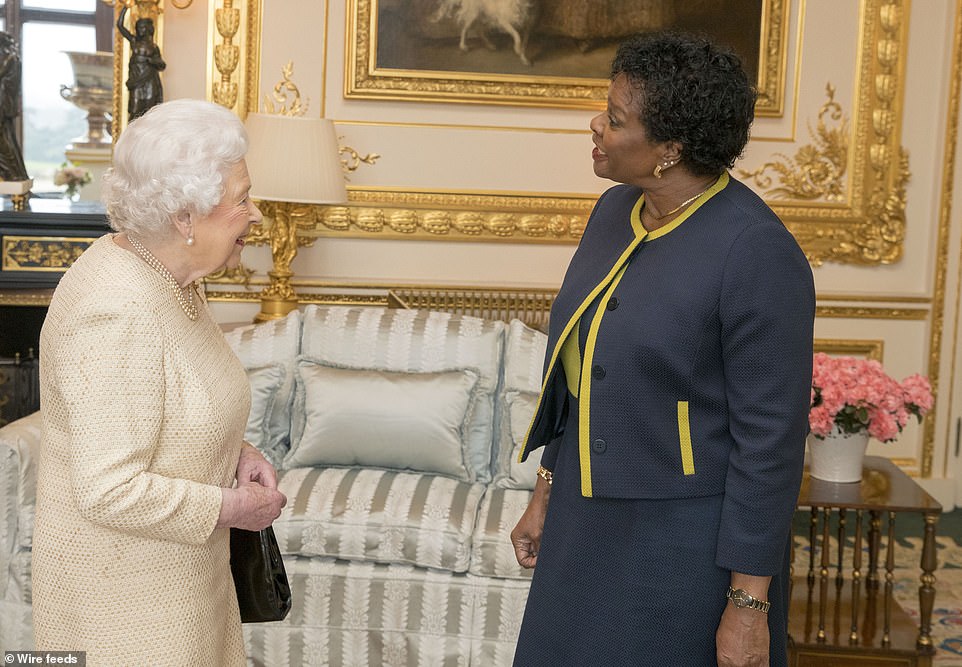 The Queen is pictured meeting Dame Sandra Mason in a file picture. Dame Sandra will replace the Queen as head of state

He will go on to give examples of the ties that will remain – ‘the close and trusted partnership between Barbados and the United Kingdom as vital members of the Commonwealth’ and ‘our common determination to defend the values we both cherish and to pursue the goals we share’.

Charles is also expected to celebrate the cultural, social and economic bonds between the UK and Barbados, ‘the myriad connections between the people of our countries – through which flow admiration and affection, co-operation and opportunity – strengthening and enriching us all’.

Barbados is following other Caribbean nations who have also dispensed with the Queen as their head of state, with Guyana becoming a republic in 1970, Trinidad and Tobago following in 1976 and Dominica two years later.

In recent years Jamaica has also flagged it wants an elected head of state, with Prime Minister Andrew Holness saying it is a priority of his government, but has yet to achieve it.

Charles is also expected to talk about reaffirming the friendship he has had with the island since he first visited 50 years ago and praise the invaluable contribution of the Barbadian diaspora in the UK.

During the ceremony, service personnel will march past the prince and give their final salute to the monarchy before the Queen’s standard is lowered and the presidential flag raised.

Demonstrations are expected during the day with some Bajans demanding an apology and reparations from the monarchy and UK Government for slavery.

Charles will also receive the Freedom of Barbados, awarded for extraordinary service to the country, the Caribbean diaspora or to humanity at large.

The Queen has been Barbados’s head of state since it became independent in 1966 but the issue of becoming a republic has been discussed at national level during the following decades.

Barbados is one of the Queen’s 16 realms – countries where she is head of state – and in the Caribbean region other countries include Antigua and Barbuda, Bahamas, Belize, Grenada, Jamaica, Saint Kitts and Nevis, Saint Lucia and St Vincent.