Washington: The US Department of Justice in Puerto Rico has announced a record-breaking cocaine bust after officials seized a submarine in Caribbean waters.

Officials captured a 15.8-metre-long, 2.4-metre-wide semi-submersible carrying 2500 kilograms of cocaine worth about $US75 million ($96 million), US Attorney for the District of Puerto Rico Stephen Muldrow said. 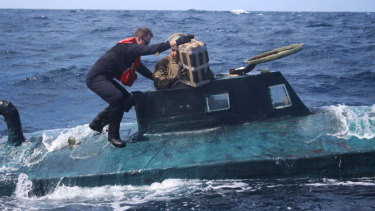 US Coast Guard members board a self-propelled semi-submersible in international waters in 2019. A new “narco sub” has been intercepted on its way to Puerto Rico.Credit:US Coast Guard/AP

The vessel had allegedly left Colombia’s northern coast with the goal of unloading its cargo in Puerto Rico. The submersible and three Colombian crewmen were detained by the US Coast Guard about 24 kilometres north of South America on April 8 and the men were indicted April 14. But the Department of Justice announced the bust Monday (Tuesday AEST).

Semi-submersible and fully-submersible drug-trafficking vessels are captured off the Pacific Coast of Central America frequently, but it’s unusual for such a craft to be intercepted in the Caribbean, Muldrow said.

It’s too soon to tell if the submarine represents a new smuggling tactic in the region.

“Only time will tell,” he said. “These things are very hard to find, very hard to detect and very costly to construct.”

Because Puerto Rico is a US jurisdiction it’s seen as “an ideal objective” for drug trafficking groups that want to ship their profits home in US dollars, Muldrow said.

Since October, the US Caribbean Corridor Strike Force, as the law enforcement group is known, has seized 17,000 kilograms of cocaine worth more than $US510 million off the coasts of the US territory, a figure the Department of Justice said “significantly outpaced” the previous two fiscal years.