In an email to members, obtained by the Herald, RFS Commissioner Rob Rogers said the decision would allow “a review of serious matters they reported in the past three years, where the member doesn’t believe that the appropriate process was followed, or that the outcome wasn’t appropriate”. 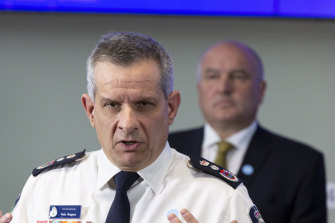 Mr Rogers said members would be able to lodge claims directly with Clayton Utz and any matters would be treated confidentially.

He also said the findings of a Grievance and Discipline Survey would be analysed, with a report back to RFS members by the end of May.

President of the Volunteer Fire Fighters Association Mick Horton welcomed the engagement of a law firm to oversee complaints of bullying, sexual harassment, discrimination or other misconduct.

“This is a step in the right direction,” Mr Horton said. “Are we there yet? We’ll see but I don’t think so.”

The association has concerns about the independence of Clayton Utz given their past work for the RFS, as well as about the number of complaints the lawyers will not be examining.

Clayton Utz will not consider complaints reported before May 31, 2018, nor those previously unreported. Complaints involving staff managed under section 69 of the Government Sector Employment Act will also be excluded.

At the time, Commissioner Rogers said staff and volunteers handling these matters had worked to the best of their ability but a review into the handling of volunteer-based membership issues was needed.

The Clayton Utz independent review process is expected to remain in place until the RFS’s new grievance and discipline processes is implemented by the beginning of 2022.