Catch! Riley the 85lb golden retriever leaps into his owner’s arms for a cuddle in adorable trick

Golden retriever Riley clearly believes dogs are a man’s best friend – and jumps up into his owner’s arms to prove it in an adorable trick.

The six-year-old pet from Richmond, Virginia, loves to show his affection by hurling himself at owner Nick Kime, who somehow manages to catch the 85lb fluffy hound.

Footage shared on the dog’s own social media shows Riley and Nick playing their version of the game Catch. Clips show the flying dog wearing a pair of wings and a superhero cape. 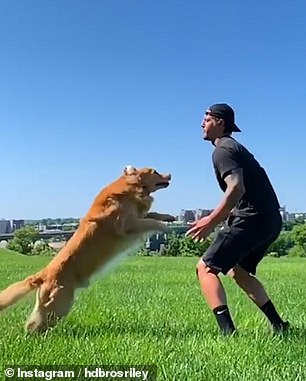 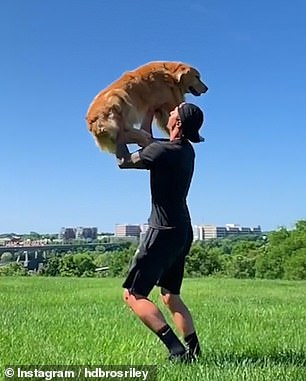 Six-year-old golden retriever Riley, from Richmond, Virginia, charges at his owner Nick Kime before leaping up into his arms in an explosive show of affection

Nick, who owns real estate photography business HD Bros, is seen carrying grocery bags and wearing a backpack in the clips but never fails to catch his canine companion.

At the end of the video, Nick catches Riley and then lifts him high into the air.

Riley is a social media star with his own Instagram account which is followed by over 89,000 people.

The description on the account reads: ‘Six year old good boy. Jumping straight into your hearts.’

The video was captioned: ’85lbs of flying fur coming atcha.’

It was originally uploaded on August 20 and has since been liked more than 36,000 times.