Prague: Hundreds of people have gathered in a northern Czech town after a Roma man died after a police officer responding to a call about an altercation knelt on his neck.

Police said the preliminary investigation showed no link between the police intervention and the man’s death. But the angry participants, displaying banners that read “Roma Lives Matter,” condemned the police. 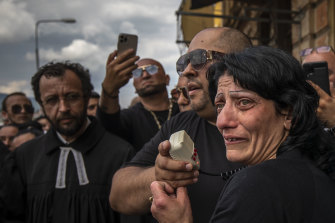 Simona Tomasova sister of Stanislav Tomas speaks to a crowd during a commemorative event of the death of her brother in Teplice, Czech Republic. Credit:Getty Images

Video footage shows one police officer kneeling on the man’s neck for several minutes in the northern city of Teplice on June 19. The man, who hasn’t been officially named, but has been identified by his family as Stanislav Tomas, later died in an ambulance.

Roma activists and participants of Saturday’s gathering rejected the police explanation. The protesters later marched to a local police station.

Roma have long suffered racism and discrimination in eastern Europe and continue to face huge hurdles in employment and education.

Some compare the Roma man’s death to the killing of George Floyd, a Black American man who died when a white Minneapolis police officer knelt on his neck. 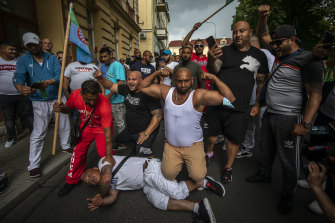 Protesters blame the death of Roma man Stanislav Tomas on police officers after a video showed one officer kneeling on the shoulders and neck of a man for several minutes.Credit:Getty Images

Europe’s main human rights body, the Council of Europe, Amnesty International and the government’s envoy for human rights all called for a thorough and independent investigation while the country’s deputy ombudsman said she will launch a separate probe into it.

“I’m angry,” Jan Duzda, a music producer who is a Roma told The Associated Press in an interview in English “I’m angry because this is not for the first time. It’s really strange,” Duzda said. “My question is why he died?”

Duzda said that when he looked at a video of the incident, he wondered why they needed to restrain the man for so long. “There’s really something wrong.”

He said that attacks on his embattled minority are common in the country, adding: “Treatment from the police side is very, very bad.”

Roma have long suffered racism and discrimination in eastern Europe and continue to face huge hurdles in employment and education.

Some compare the incident to the killing of George Floyd, a Black American man who died when a Minneapolis police officer knelt on his neck.