Amanda Brown, 50, was found by Newman lying on the floor of the couple’s Docklands apartment about 8pm on Saturday, the Herald Sun reported. 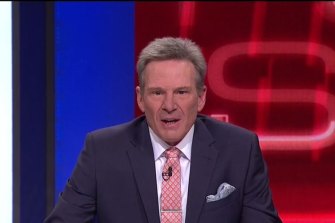 “I’m just devastated, I can’t say anything else,” Newman told the Herald Sun.

Emergency services were called but Ms Brown was unable to be revived.

In a statement, Victoria Police said: “Police will prepare a report for the Coroner following the death of a 50-year-old woman in Docklands on Saturday. The matter is not being treated as suspicious.”

An Ambulance Victoria spokesman said: “Paramedics responded to a call to Docklands last night to this case.”

Newman, 75, married his longtime partner of 20 years at a private ceremony in their Docklands apartments late last year.

After playing 300 games for the Geelong Football Club between 1964 and 1980, Newman has had a lengthy and at times controversial media career.

Ms Brown was Newman’s fourth wife and he has three children: Max, Jack and Jordan.

The death of Ms Brown comes as the Geelong club mourns the loss of former president Frank Costa, who died on Sunday morning, aged 83, after battling cancer for the past year.

Costa helped the club break a premiership drought of 44 years when they won the 2007 flag under coach Mark Thompson and captain Tom Harley.

Our Morning Edition newsletter is a curated guide to the most important and interesting stories, analysis and insights. Get it delivered to your inbox.