Glimpse at true scale of Britain’s lost trees: Study of 1850 and 2021 maps from small plots in Essex and Suffolk reveals more than 600,000 ash, oak and elms have been lost to modern farming

A remarkable study of maps from Essex and Suffolk plotted more than 170 years ago has revealed how 600,000 British ash, oak and elm trees have vanished since the onset of modern farming.

Volunteers enlisted by the Woodland Trust studied the mid-19th century Ordnance Survey maps and digitised the locations of more than 100,000 trees standing outside of woodland in the Eastern Claylands.

These were then compared to recent aerial images from the 5,000 sq km landscape, with researchers finding only 51 per cent of the 1.2 million trees mapped in small groups or alone on fields and boundaries had survived to the present day.

Around 84 per cent of scattered field trees had been felled or died, and more than half of oak, elm and ash trees standing on boundaries had vanished since the 19th century.

Researchers noted that the disappearance of more than half of these trees suggests this trend ‘is likely replicated in other UK landscapes, particularly those with similar histories of agricultural intensification.’ 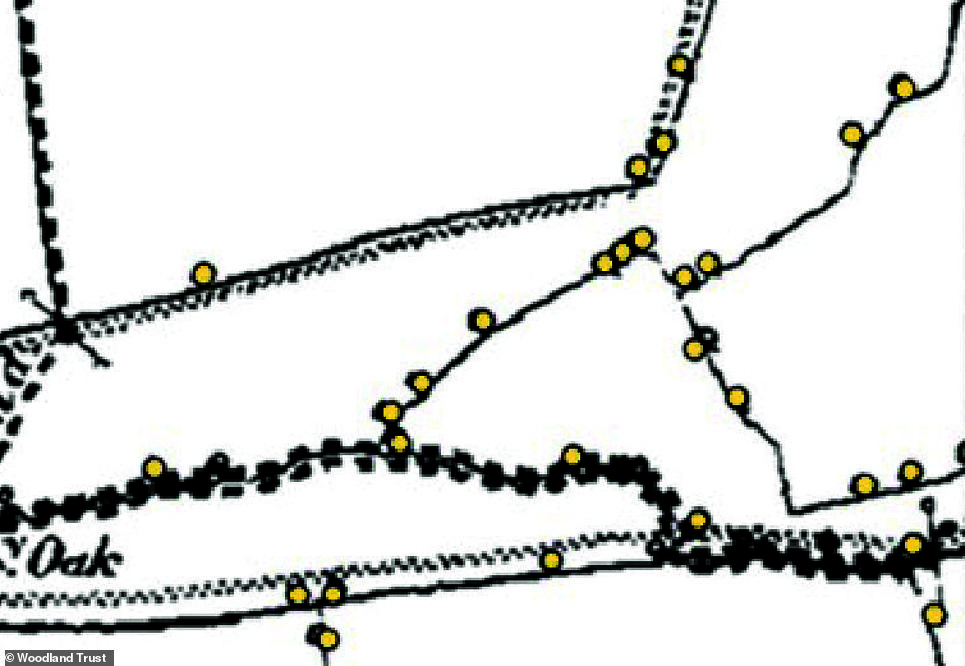 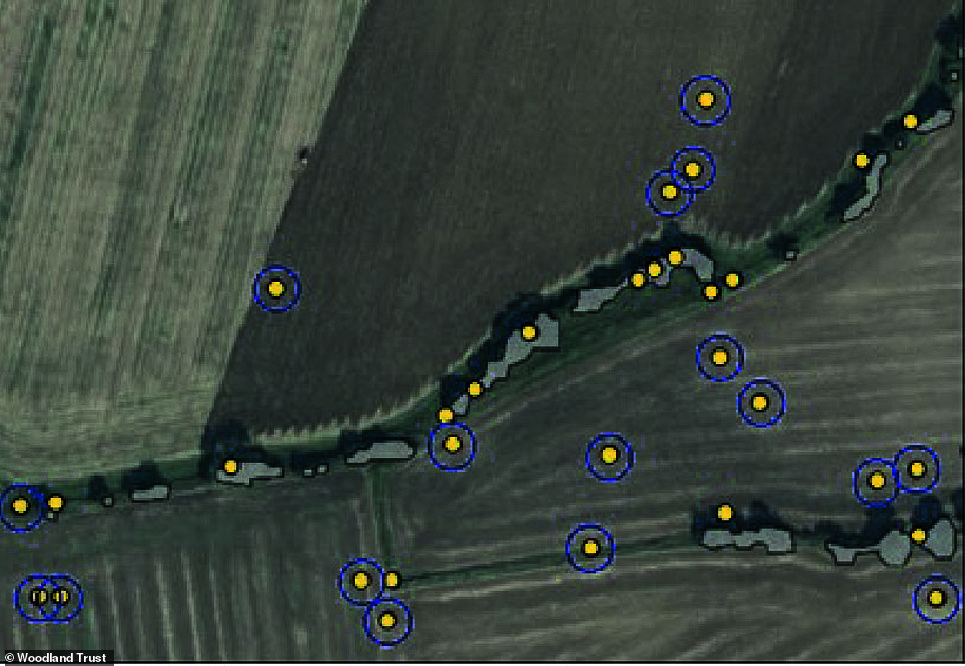 Volunteers enlisted by the Woodland Trust studied mid-19th century Ordnance Survey maps (left) and digitised the locations of more than 100,000 trees in the Eastern Claylands of Essex and Suffolk (right, circled are the trees lost) 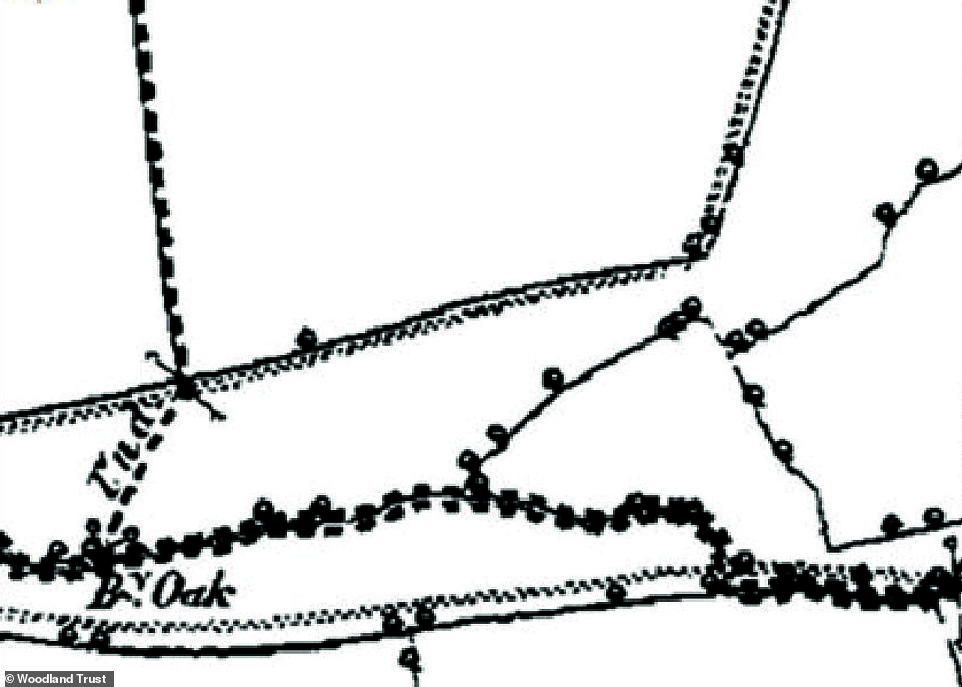 Researchers noted that the disappearance of more than half of these trees suggests this trend ‘is likely replicated in other UK landscapes, particularly those with similar histories of agricultural intensification.’ Pictured: The 1850 Ordnance Survey map

The State of the UK’s Woods and Trees report added: ‘The loss of these historic trees is concerning as they represent the loss of the particularly valuable veteran trees that they would have become had they survived.

‘The high loss of boundary trees, and particularly scattered trees, which were rare even in 1850, highlights the risk faced by these types of TOWs [trees outside woodland] and the specific habitats and benefits which they provide relative to those present in small groups.’

It added the benefits provided by these trees to wildlife and people ‘are myriad but not well understood or recognised. We need to achieve greater acknowledgement of their importance, separate to that of woodland cover, among landowners and businesses.’

The Woodland Trust stressed that trees without woodland (TOWs) provide ‘valuable ecosystem services for people and habitats for wildlife’ while facing threats from disease, urban expansion and agricultural intensification. 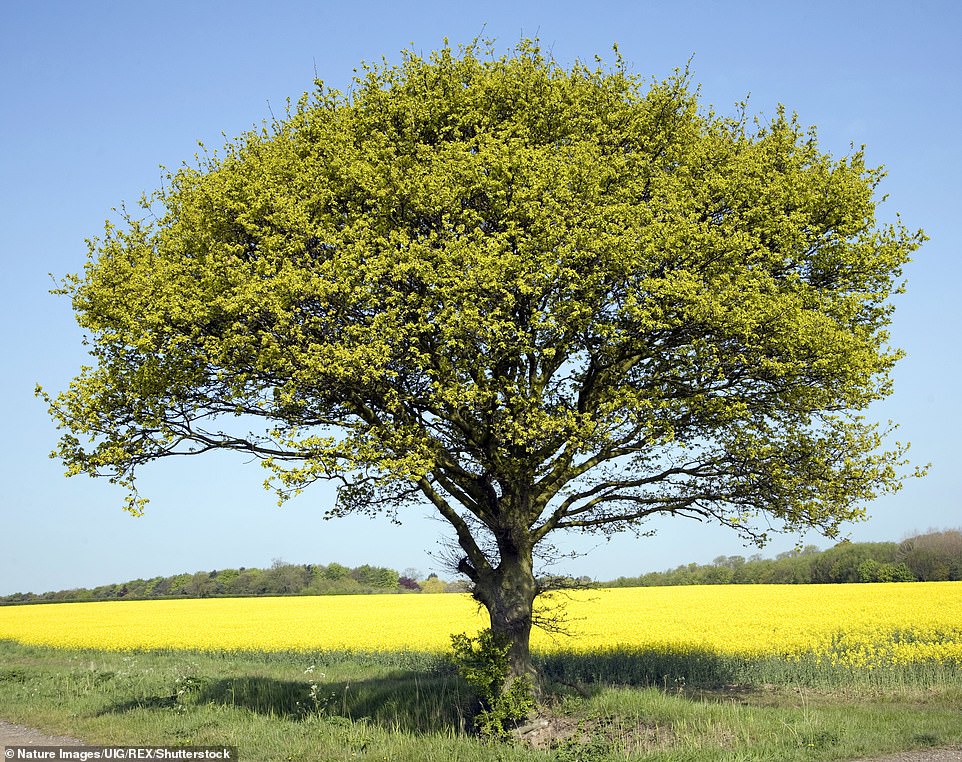 The Woodland Trust stressed that trees without woodland (TOWs) provide ‘valuable ecosystem services for people and habitats for wildlife’ while facing threats from disease, urban expansion and agricultural intensification. Pictured: An oak tree in Suffolk 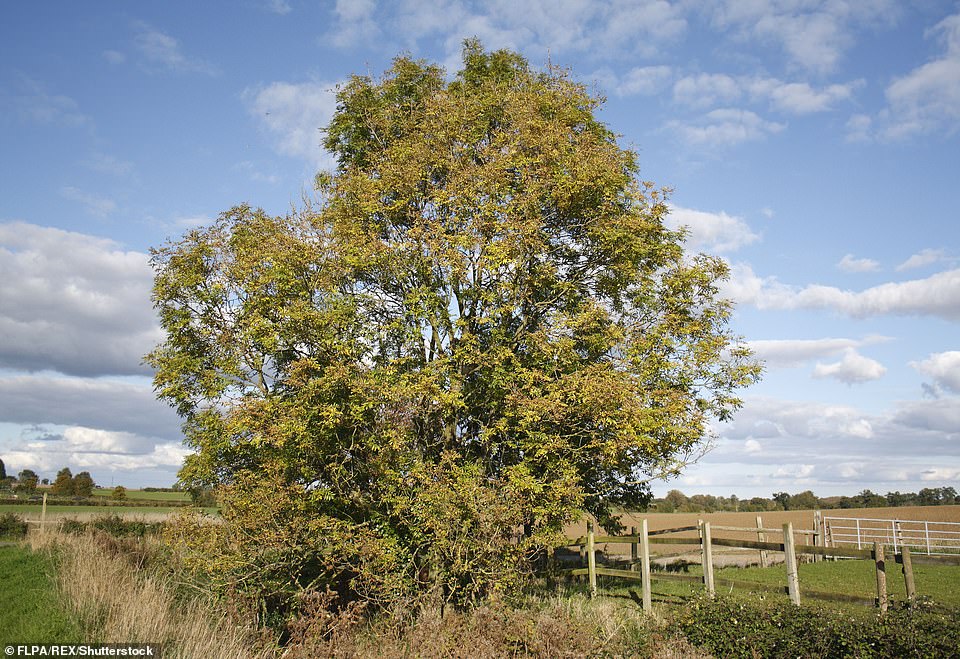 An ash tree grows at the edge of a field in Bacton, Suffolk. These isolated trees have declined significant in numbers since the mid-19th century

The report said: ‘TOWs act as refugia for wildlife within otherwise hostile landscapes. They enhance biodiversity by providing resources including shelter, sites suitable for feeding and breeding and equitable microclimates.

‘Perhaps most importantly, TOWs contribute to landscape connectivity by facilitating the dispersal of organisms between otherwise isolated woodland patches.

‘This has numerous ecological benefits, including countering genetic problems associated with small populations, allowing the colonisation of patches where species are absent, and facilitating the spread of species in response to climate change.’

The conservation charity added that an increase in the size of farm machinery and the amalgamation of small fields and farms have contributed to the clearing of many trees and hedgerows in England.

Other causes given for the decline in tree populations were historic and emerging diseases, such as the fungal disease ash dieback, modern hedge management practices and ‘high browsing pressure’ from deer.

Pictured: How field trees at boundaries, scattered in the land and grouped together have declined since 1850 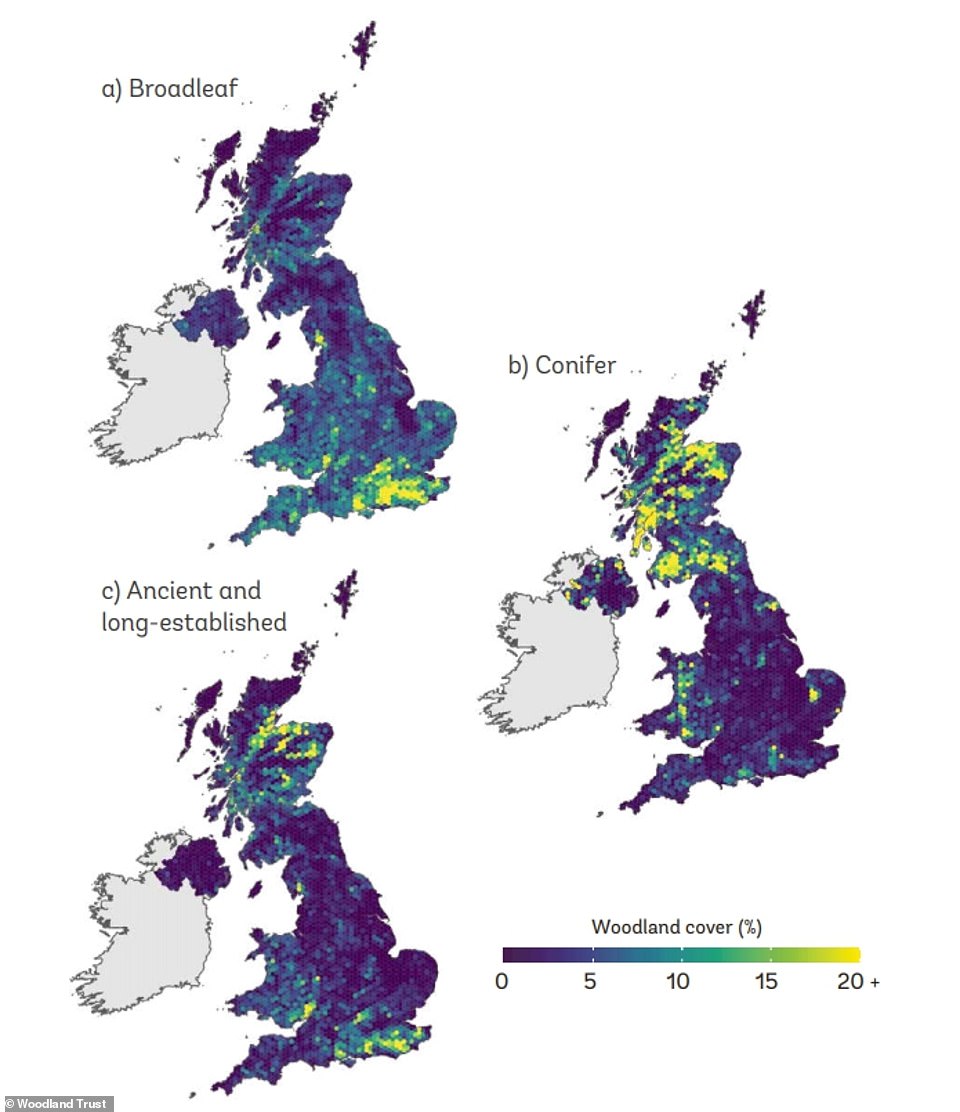 Pictured: The percentage of woodland cover per 10km across the UK of broadleaf, conifer and long-established trees

The Woodland Trust concluded that greater levels of protection were needed for boundary trees, such as lines of trees and hedgerows, alongside individual, scattered trees which inspired paintings by British landscape artist John Constable.

It said: ‘This can be achieved by grant support for their retention and good management. These trees can be perceived as challenging to owners and managers who currently bear the cost of their maintenance and may require greater advice and assistance.’

The Eastern Claylands of Essex and Suffolk is a largely agricultural region, known to be the inspiration for many of John Constable’s famed landscape paintings of the mid-19th century.

Eastern Claylands has one of the highest concentrations of medieval woodland pasture and parkland in England despite the fall in tree concentration, the Woodland Trust said, with a third of its 36,000 hectares formed of semi-natural ancient woodland or plantations on historic woodland sites.

However, the report found that the number of ancient woods under threat from development in England has recently risen to 1,225. At least 981 woodlands have been ‘permanently lost or damaged’ since 2000.

John Constable: The self-taught landscape artist inspired by the trees and river valleys he found in the sprawling Suffolk countryside

Landscape artist John Constable is well known for his paintings of the sprawling Suffolk countryside.

The self-taught artist, who was born in East Bergholt, Suffolk, in June 1776, made many open-air sketches which later became the impressive exhibition paintings he is famous for today.

He largely painted Dedham Vale – which soon became known as ‘Constable Country’ – with his most popular works including Dedham Vale of 1828 and The Hay Wain of 1821.

The former, which sits in the Scottish National Gallery, Edinburgh, depicts a cluster of trees sat above a creek on the Essex-Suffolk border in eastern England. 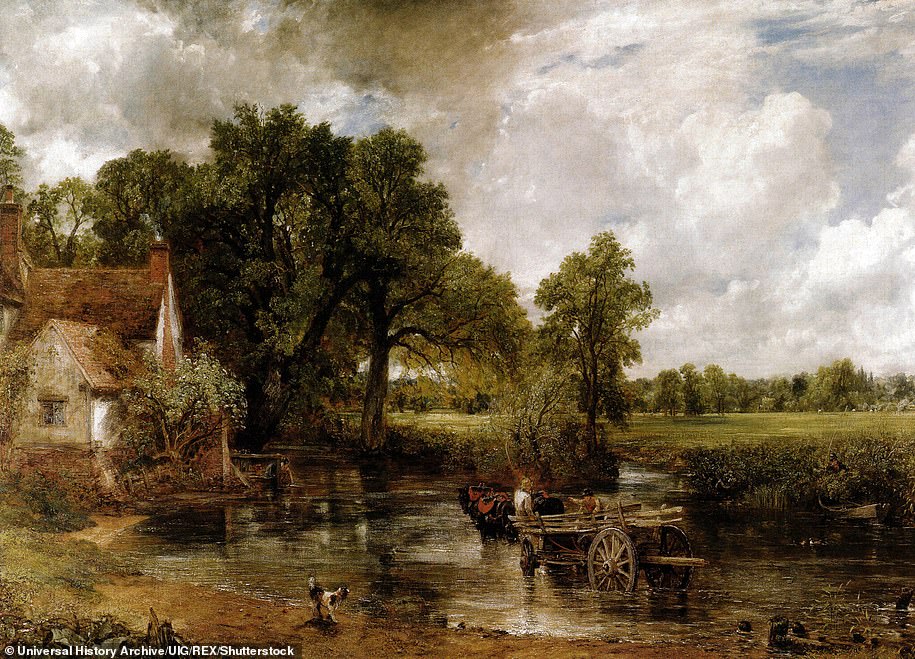 The view from Gun Hill looks towards Dedham church, near his father’s watermill, and also featured in a smaller painting created in 1802 which is currently in the Victoria and Albert Museum, London.

The Dedham Vale painting prompted Constable’s election to the Royal Academy in 1829.

His earlier work, the Hay Wain, depicts a rural scene on the River Stour. Its title refers to the wooden wagon – or ‘wain’ – used for transporting cut and dried meadow grass.

Although Constable is acclaimed of one of the greats of British art today, his art was not particularly well received in England throughout his lifetime. Despite this, Constable did have some success in Paris. 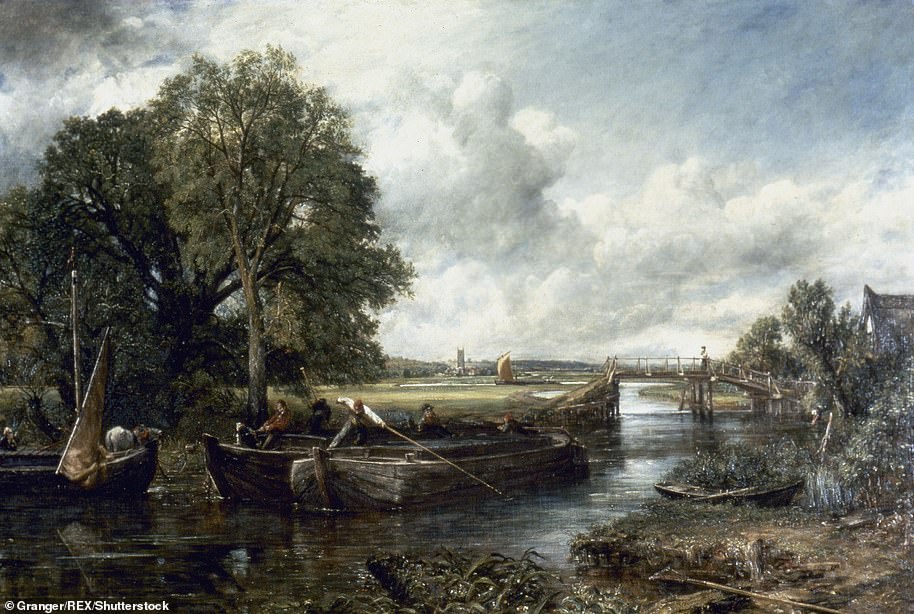 The self-taught artist, who was born in East Bergholt, Suffolk, in June 1776, made many open-air sketches which later became the impressive exhibition paintings he is famous for today

Constable influenced the Barbizon School and the French Romantic movement. He himself was inspired by Dutch artists such as Jacob van Ruisdael alongside Paul Rubens and Claude.

The artist was greatly inspired by his own home, writing to his friend John Fisher in 1821: ‘I should paint my own places best. Painting is but another word for feeling.’