Suicides in England and Wales rise by ‘deeply concerning’ 11 per cent with 4,620 deaths recorded in 2019 by coroners, according to new figures

The number of suicides in England and Wales has risen by a ‘deeply concerning’ 11 per cent with 4,620 deaths recorded in 2019, official figures show.

Men accounted for more than three quarters of suicides, the data published by the Ministry of Justice shows, the same proportion as in 2018.

The number of inquest conclusions recorded rose by two per cent last year to 31,300, a rise that the MoJ attributed to suicide and unclassified conclusions, which also rose by four per cent to 6,331.

The Office of National Statistics saw suicides increase to their highest levels since 2002 in 2018, with a total of 6,507 registered in the UK.

The Coroners’ statistics, published today, were compiled January to December 2019 and, therefore, do not record any deaths linked to coronavirus. 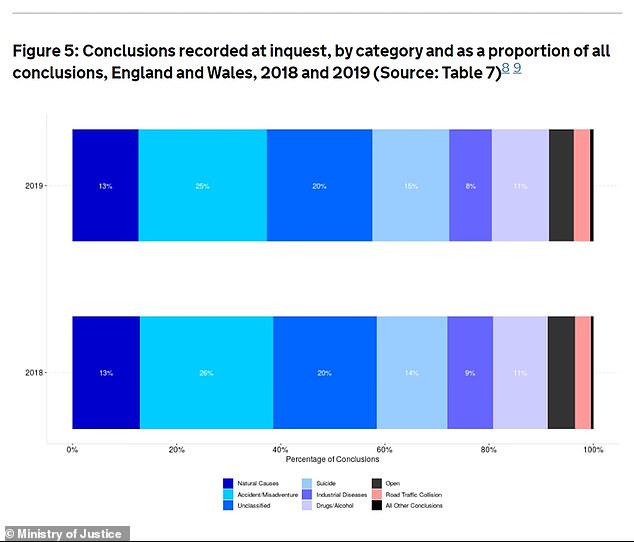 Accident or misadventure made up the highest proportion of inquest conclusions followed by suicide and natural causes, data released by the Ministry of Justice showed 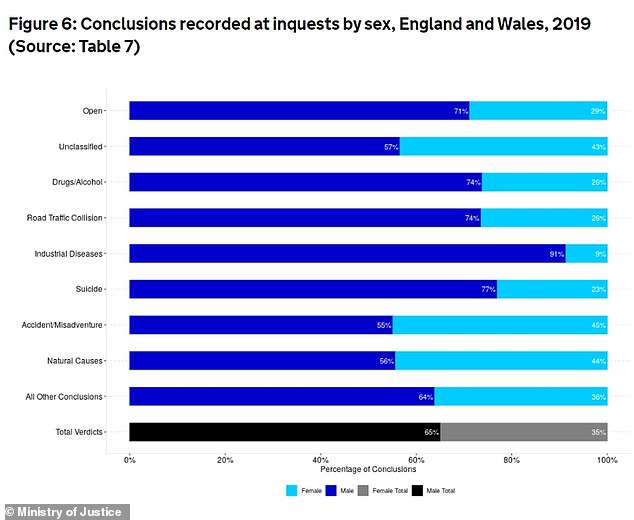 Deborah Coles, director of charity Inquest, warned many of the deaths illustrate the ‘impact of austerity and inequality and a historic underfunding of health and community services’.

‘Despite repeated promises from governments about prioritising and addressing mental ill health, it is deeply concerning to see that such deaths have not only continued, but numbers have gone up,’ she said.

‘Inquests too often find these were preventable and expose repeated patterns of failure and neglect in mental health services, which often meet those only at crisis point.

‘What is worrying is the impact this pandemic is having on mental health and to ensure proper resourcing of these already stretched services.’

The Coroners’ statistics showed that men made up 56 per cent of 210,900 deaths reported to the office. 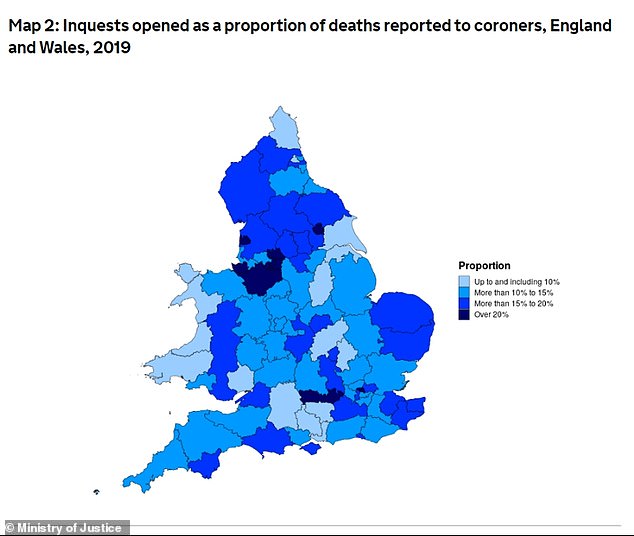 Of inquests carried out, the most common conclusion was death by accident or misadventure, with 7,736 or 25 per cent of the total.

This was followed by suicide, and death by natural causes, with 3,957 or 13 per cent.

Unclassified conclusions, which included narrative verdicts, made up 6,331 or 20 per cent.

About 1,939 deaths reported to coroners occurred abroad, remaining at approximately the same level since 2011.

There was a four per cent fall in the number of deaths reported to coroners, dropping to 210,900, while the average time to complete an inquest rose by a week to 27 weeks.