Bangkok: Protesters have rallied in Bangkok for what organisers billed as be the biggest demonstration in years to demand the removal of former junta leader and now military-backed Prime Minister Prayuth Chan-ocha, a new constitution and elections.

Some protest leaders have also demanded reforms to curb the power of King Maha Vajiralongkorn's monarchy and have vowed to keep up those calls in spite of threat of jail and official pressure to stop. 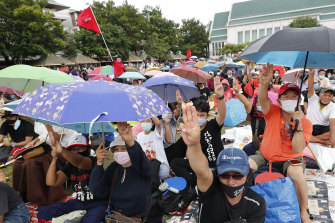 Pro-democracy activists raise a three-fingers salute, a symbol of resistance during a protest at Thammasat University in Bangkok, Thailand, on Saturday.Credit:AP

Hundreds of protesters gathered under light drizzle on Saturday around the campus of Thammasat University, long seen as a hotbed of opposition to the military and royalist establishment.

Protesters were allowed to gather despite the university having previously said they could be barred.

Demonstrations have built since mid-July. The biggest so far drew 10,000 in Bangkok last month, but protest leaders have said they expect this one to be much bigger.

“Today the people will demand back their power,” Arnon Nampa, a human rights lawyer who has emerged as a leading figure in the protest movement, said on Twitter.

In addition to the students who began the protest movement, people had come from other parts of Thailand.

"The government is cheating and we want to get rid of them," said Patricia Phakkhaphinya, 35, who had come from Surat Thani, in southern Thailand.

"Everything is down and people have no money."

Parit "Penguin" Chiwarak, one of the protest leaders, told Reuters at lunch time, he believed as many as 100,000 people could show up. Police said they expected up to 50,000 to join.

Thai politics has for years been marked by challenges to the royalist and military establishment by politicians backed by poor urban and rural voters, and more recently by the student protesters.

The military, which proclaims itself the defender of the country's core institutions, in particular the monarchy, has stepped in to overthrow civilian governments numerous times, most recently in 2014, citing the need to maintain stability.

Prayuth has said the government would allow protests as a form of free speech, but that demands for reform of the monarchy were not acceptable.

Parit said the demands would be reiterated this weekend.

On Thursday, Prayuth warned the protesters against raising the risk of spreading the coronavirus and urged them to put the health crisis before politics.

Police said they were deploying 10,000 officers on Saturday. Police spokesman Kissana Phathanacharoen said: "I want to tell them [protesters] that it’s not right to do anything too extreme, anything illegal.”

Related posts:
LyfeStyle News:
The Real Reason Ashley Biden Keeps Her Social Media Private
Tokyo Olympic Games ‘unlikely’ to happen says London 2012 organiser
Martin Lewis explains HSBC customers could get £50 compensation from the bank
50 Best Valentine’s Day Gifts For Her In 2021
Covid-free ward of Cleethorpes say 'following rules' beat the virus
Recent Posts
This website uses cookies to improve your user experience and to provide you with advertisements that are relevant to your interests. By continuing to browse the site you are agreeing to our use of cookies.Ok