The FRANTIC festive exodus! RAC warns Christmas getaway will be the BUSIEST in five years with 27M trips this weekend… but empty streets and shopping centres suggest many may ALREADY left

The festive getaway could be the busiest on UK roads in five years as around 27million take to the roads between Friday and Christmas Eve, research says.

The RAC predicted there will be an average of 4.1million such journeys taking place every day next week, reaching a peak of 5.3million on Christmas Eve.

Drivers are advised to set off early or postpone their trips until after dark to avoid the worst of the traffic. Meanwhile separate research said December is the second deadliest month for drink-driving.

Analysis of Government figures by Brake found 6,140 people were killed or injured in collisions involving at least one driver over the alcohol limit on Britain’s roads during December between 2012 and 2019.

It comes as petrol firms are accused of ripping off motorists by cashing in on the great Christmas getaway. For the first time petrol forecourt margins have surged past a record 20p a litre – or £11 on every tank of fuel.

And some motorway services are charging £10 over the national average to fill the typical 55-litre tank in a family car. 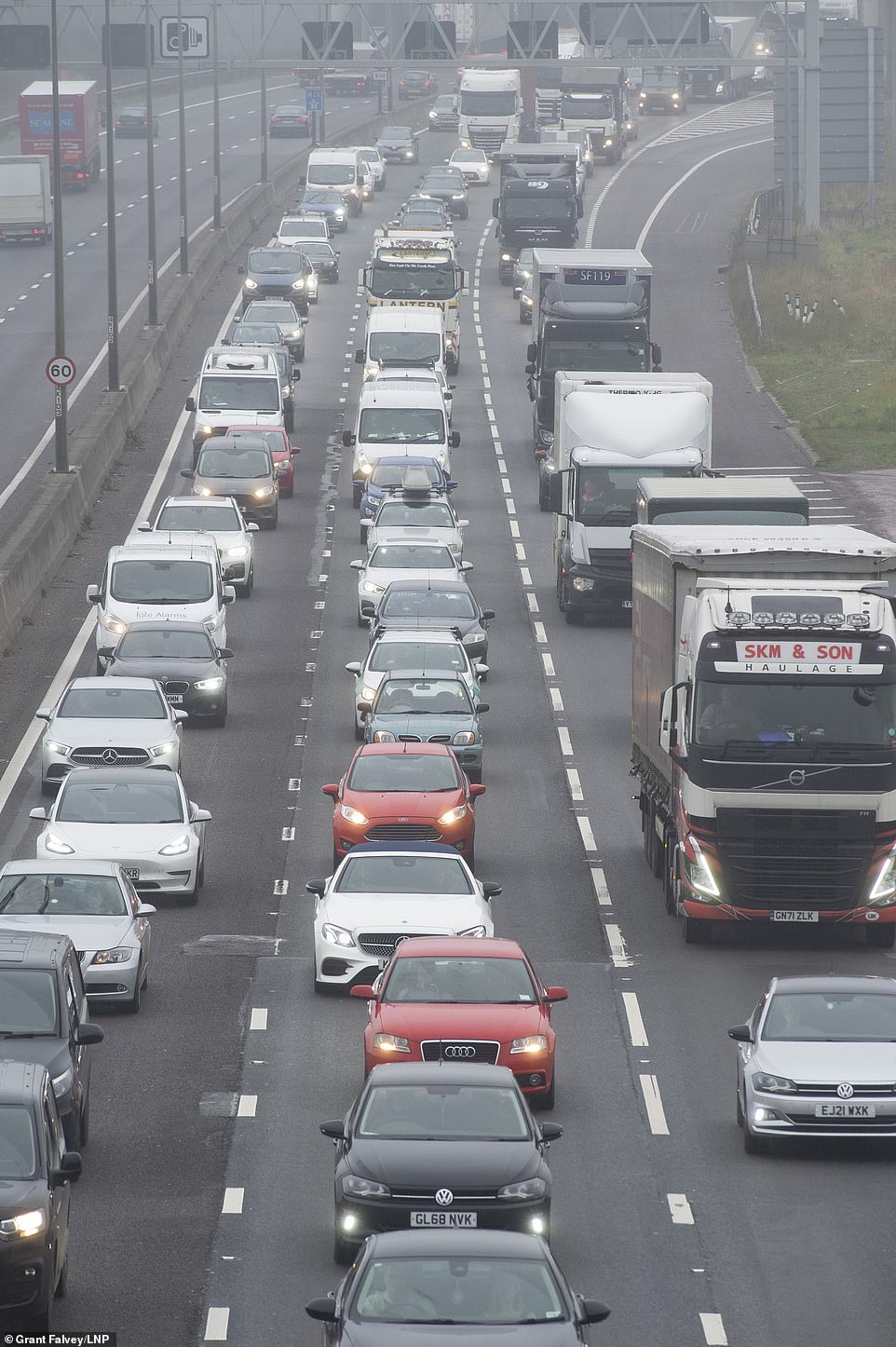 The RAC predicted there will be an average of 4.1million such journeys taking place every day next week, reaching a peak of 5.3million on Christmas Eve. Pictured: The M25 today 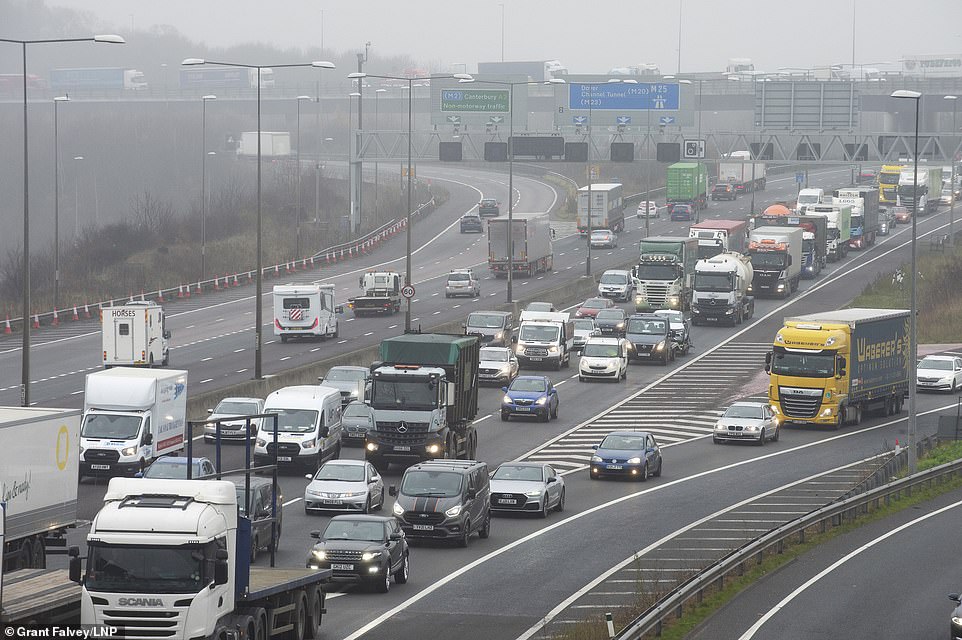 Heavy traffic on the M25 in Dartford, Kent, today going anti clock-wise towards the Dartford Crossing as the Christmas getaway begins 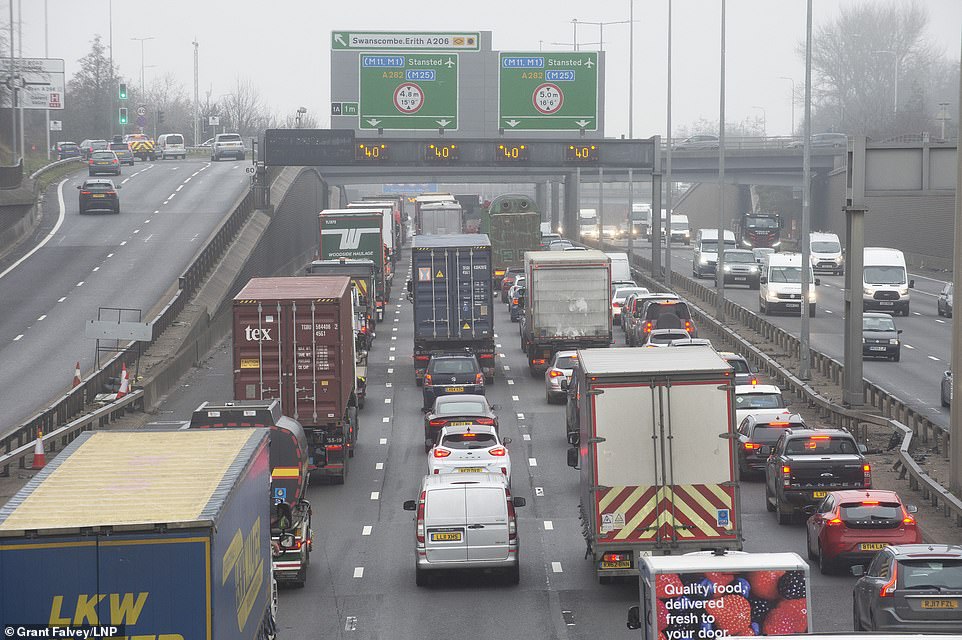 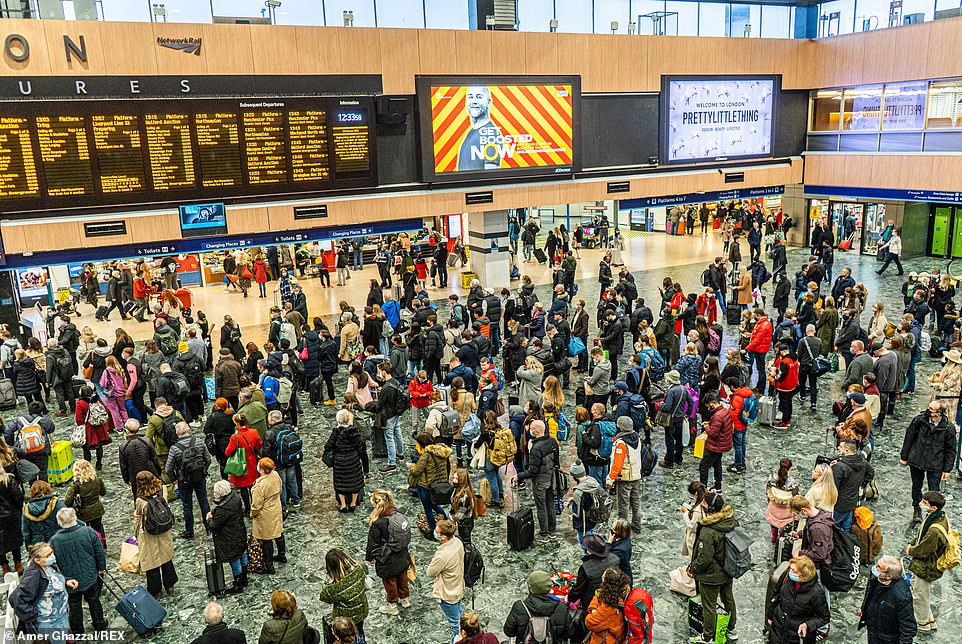 Drivers are advised to set off early or postpone their trips until after dark to avoid the worst of the traffic. Meanwhile separate research said December is the second deadliest month for drink-driving. Pictured: Euston today

The RAC figures are based on a survey of 1,400 motorists questioned between December 9 and Tuesday. Many people were unable to spend Christmas with loved ones last year due to pandemic restrictions.

The poll suggested just 10 per cent of drivers do not plan on travelling by car over the festive period this year because of the virus.

But the RAC acknowledged that the spread of the Omicron variant could curtail Christmas celebrations.

Traffic information supplier Inrix warned the worst pre-Christmas traffic jams are likely on the M25 between Gatwick Airport and Junction 16 on Thursday afternoon.

Drivers are also likely to face delays on the clockwise M60 near Manchester, the southbound M40 in Oxfordshire and the northern and western sections of the M25.

RAC spokesman Rod Dennis said: ‘Despite the increasing prevalence of the Omicron Covid variant, our research shows that the vast majority of drivers are still determined to do Christmas properly this year – in sharp contrast to 12 months ago.

‘But with overall traffic volumes in the run-up to the big day set to be down slightly on normal given the current work-from-home guidance, there’s reason to hope there won’t be too many queues as millions get away to see friends and family.’ 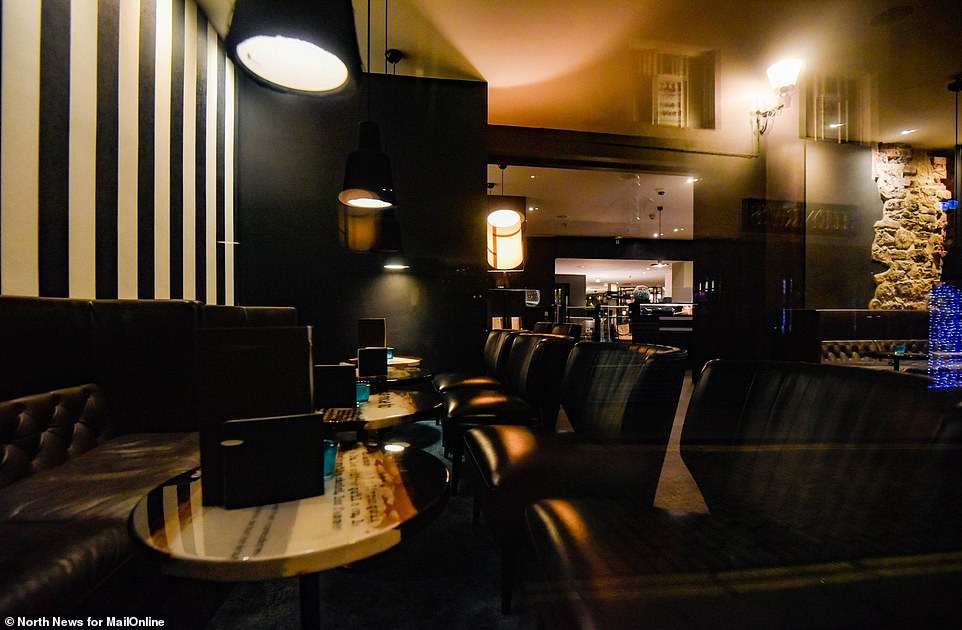 The RAC figures are based on a survey of 1,400 motorists questioned between December 9 and Tuesday. Many people were unable to spend Christmas with loved ones last year due to pandemic restrictions. Meanwhile, pubs are empty in Newcastle this week (pictured) 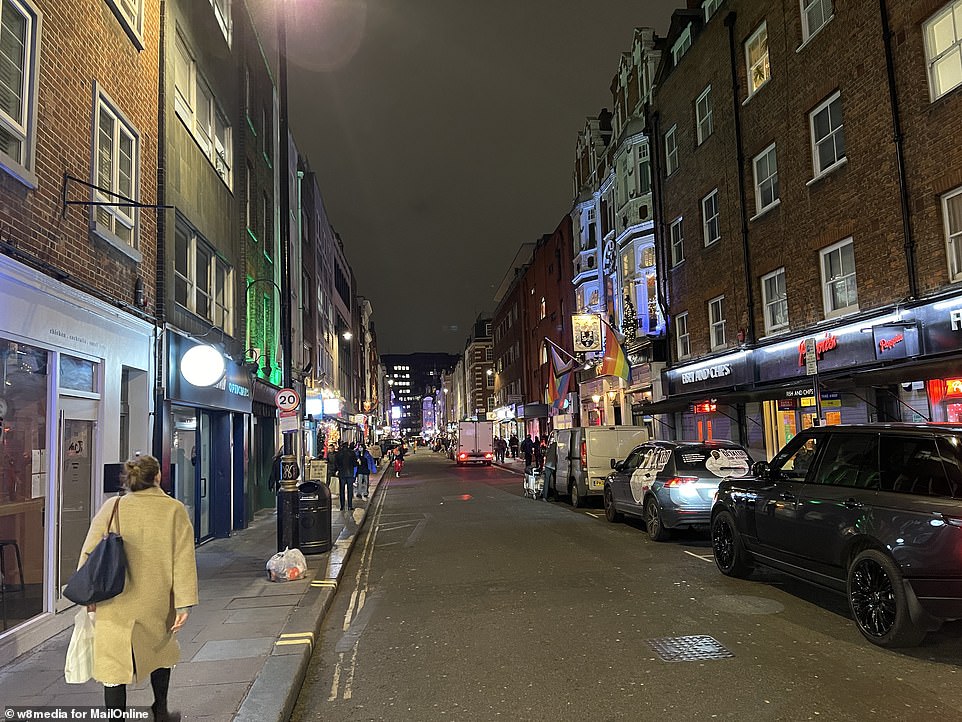 The RAC is urging drivers to carry out checks on their tyres, oil, coolant and screenwash before embarking on getaway journeys.

Inrix analyst Bob Pishue said: ‘With kids out of school and many Brits taking extended time off for the holidays, drivers can expect moderate delays around the UK, but heavier congestion on motorways in and out of the cities.

‘Leaving later in the day is recommended, as roads will begin to clog up during the early afternoon.’

National Highways, which manages England’s motorways and major A-roads, said it will remove more than 900 miles of roadworks ahead of the festive getaway.

That will result in nearly 98 per cent of its network being clear of cones from 6am on Tuesday until January 4, the first working day of 2022.

Meanwhile the separate figures from Brake found December was the second worst month for drink driving in Britain. This was behind only August, which had 6,260 casualties over the same timeframe.

A total of 69,000 people were killed or injured in drink-drive crashes across all months in the eight-year period. The drink-drive limit in England, Wales and Northern Ireland is 80mg of alcohol per 100ml of blood.

No other part of Europe has a limit above 50mg/100ml. The Scottish Government reduced its limit to that level in 2014.

Brake head of campaigns, Jason Wakeford, said: ‘Thousands of people are being needlessly killed and injured at the hands of drink-drivers every month.

‘We need to change the culture around drink-driving, starting with more awareness that any amount can be deadly.

‘While measures such as effective ongoing police enforcement and public information campaigns, including Think!, are helping to reduce deaths and injuries, Government should follow Scotland’s lead and reduce the legal limit.

‘Such a move would make it clear to drivers that no amount of alcohol is safe when behind the wheel.’

Research published in the Harm Reduction Journal earlier this month suggested that half of drinkers believe they are safe to drive despite exceeding the legal alcohol limit.

Police forces are intensifying enforcement of drink and drug-driving rules in the run-up to Christmas, targeting known hot spots. Some 6,730 motorists were caught in 2020 during the annual festive operation.

Petrol prices are believed to be staying high across the board because supermarkets are not engaging in their traditional price-cutting war.

But motoring groups accused providers of keeping prices artificially high to cash in on the holiday rush – with around nine in ten drivers expected to take to the roads. 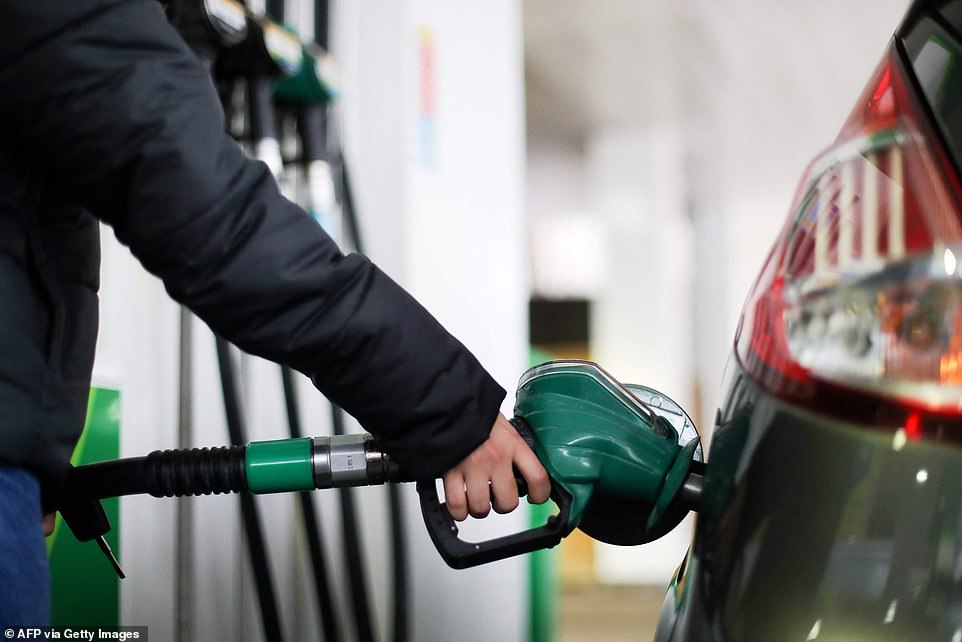 Petrol firms have been accused of ripping off motorists by cashing in on the great Christmas getaway. For the first time petrol forecourt margins have surged past a record 20p a litre – or £11 on every tank of fuel. 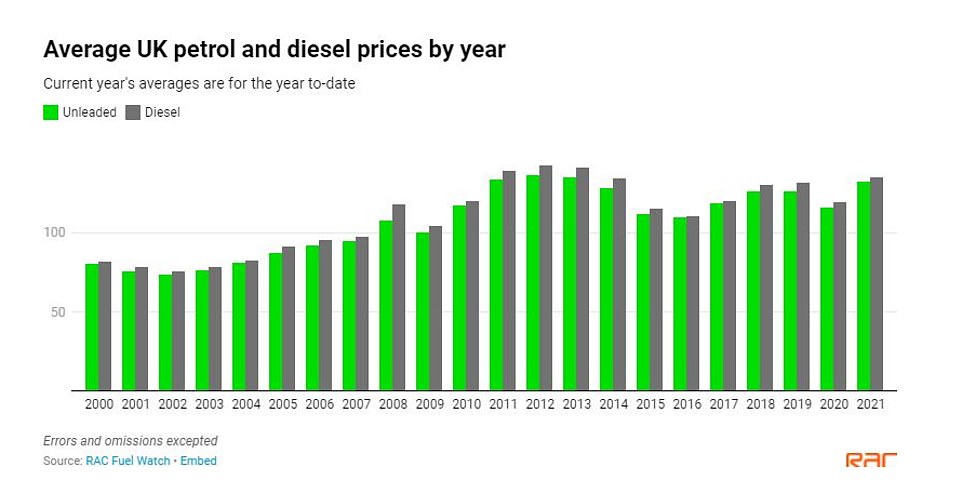 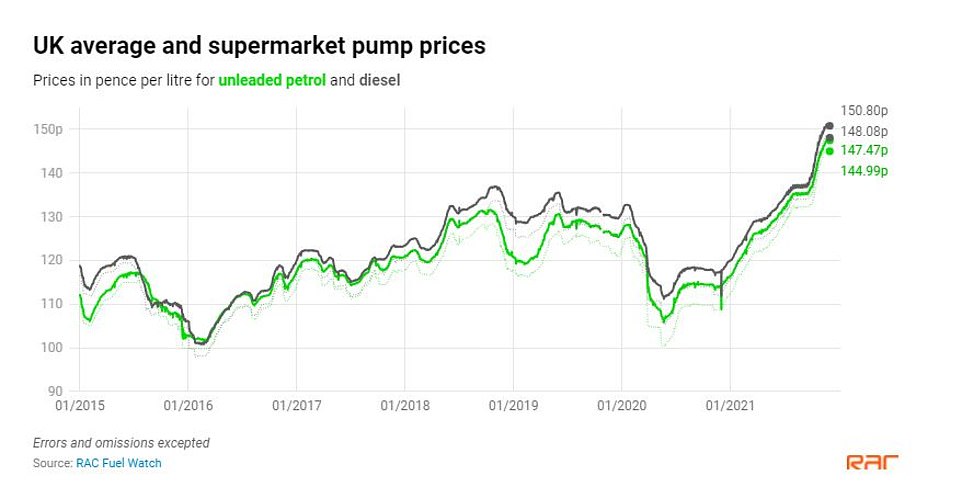 A new report said that wholesale fuel prices plummeted by more than 10p a litre two weeks ago as the global price of oil fell.

But the Petrol Retailers Association, which represents independent forecourts, said profit margins have had to remain higher to re-coup losses made during the pandemic.

Howard Cox, founder of the FairFuelUK campaign group, called for a price cap and watchdog to regulate the industry.

He said: ‘Even allowing for market increases in margins and distribution costs, the world’s highest taxed drivers are paying up to 10 pence more than is honest.

‘Everyone knows this is a perennial problem, except the Treasury. The flood of extra VAT to the Government due to dishonest fuel pricing is in the billions. It’s time for an independent regulator to protect drivers.’

An AA report also found prices are being kept artificially high due to less competition between supermarkets.

Traditionally, their forecourts have been the cheapest and a price war usually seen between them at the pumps, designed to draw more shoppers to their stores, has cooled off.

It means that, whereas average petrol prices at supermarkets were 6.3p a litre below the UK average in May last year, they are now just 2.2p a litre lower. This dropped to as low as 1.9p last month.

It means the typical saving from filling up with petrol at a supermarket is as much as around three times lower.

The takeover by EG Group, run by the billionaire Issa brothers and a secretive private equity firm, of Asda has been partly blamed for the reduced competition. 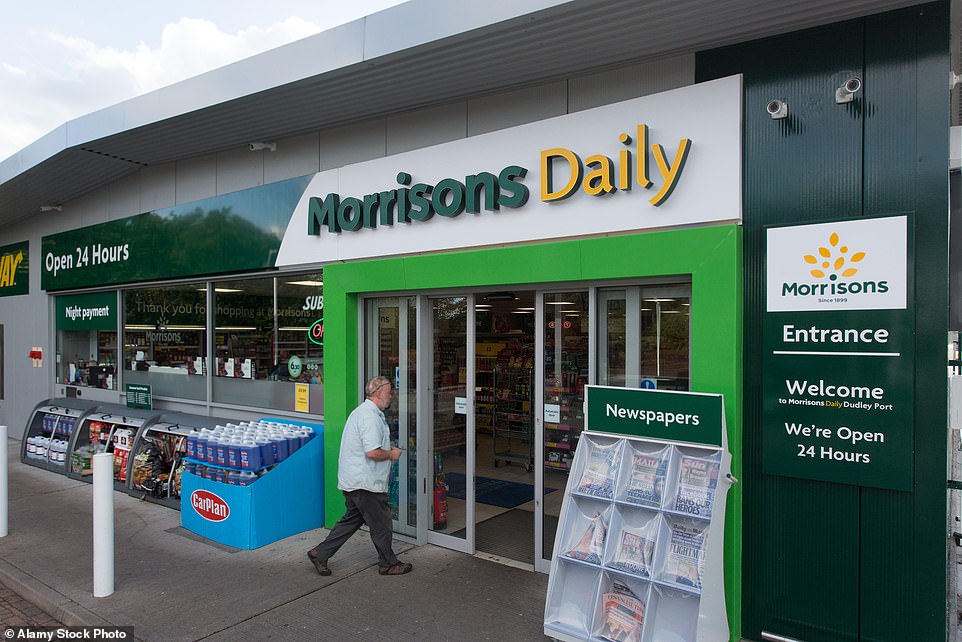 RAC fuel spokesman Simon Williams said: ‘It has become blatantly apparent in the last six weeks that any competition that existed in supermarket fuel retailing has all but disappeared’

RAC fuel spokesman Simon Williams said: ‘It has become blatantly apparent in the last six weeks that any competition that existed in supermarket fuel retailing has all but disappeared.

‘Since mid-November when the wholesale price of petrol began to fall, the big four supermarkets, who dominate fuel sales, have upped their margins to 11p a litre from around 4p prior to that.

‘We fear that a change of pricing behaviour from Asda is to blame. Previously Asda would always cut its fuel prices when wholesale costs dropped to bring customers to its stores and other retailers would then follow suit. Since its change of ownership however, this hasn’t happened.’

The AA’s fuel spokesman, Luke Bosdet, added: ‘When the supermarkets ceased to compete, their rivals enjoyed an early Christmas.

‘There were two clear price-cutters in the spring of 2020, Asda and Morrison, and neither have seized the initiative.’