The biggest rhodedendron in Britain? Enormous, 30ft high plant has bloomed… but coronavirus lockdown means nature lovers will not be able to admire it this year

It may be the biggest rhodedendron in Britain, with more blossoms than ever before.

But, towering at 50ft wide and 30ft high, walkers will no longer be able to marvel at its beautiful flowers.

Usually, spring draws in visitors from around the globe.

This year, the coronavirus lockdown will mean only the gardeners who tend to it will be able to admire the sea of pink in the grounds of the South Lodge Hotel in Horsham, West Sussex.

Typically, the plants do not grow higher than six feet. 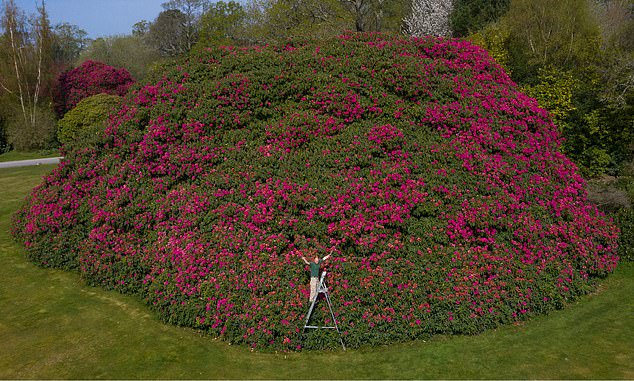 This enormous rhodedendron bush in the grounds of South Lodge Hotel in Horsham, West Sussex, has just started to burst into a dazzling sea of pink

Yet this rhododendron, planted 120 years ago by Victorian explorer Frederick Du Cane Godman, has continued to expand over the years.

The hotel’s head gardener Paul Collins and his team have affectionately nicknamed it ‘The Big Rhodey’.

Mr Collins, 50, said: ‘It’s bigger than it’s ever been before. It’s Britain’s biggest rhododendron arboreum smithii – but we call it The Big Rhodey for short.

‘I’m always pleased to look at it but when it’s in bloom and as impressive as this it’s a magnificent sight to behold. But, unfortunately nobody can come and see it.

‘Whenever we are open we have people here and at this time of year we usually have a lot of weddings, so people will have their pictures taken in front of it. 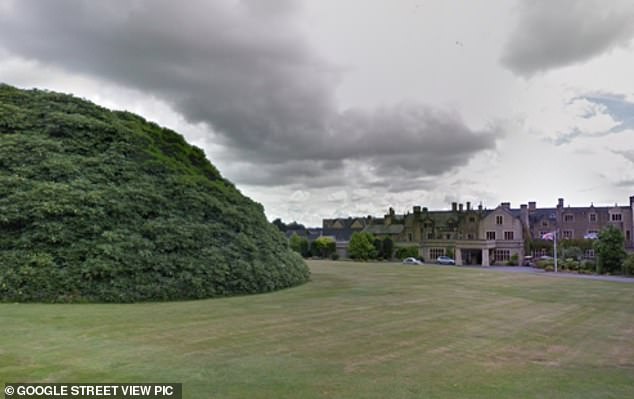 The rhodedendron bush pictured when it isn’t in flower, left, with the South Lodge Hotel 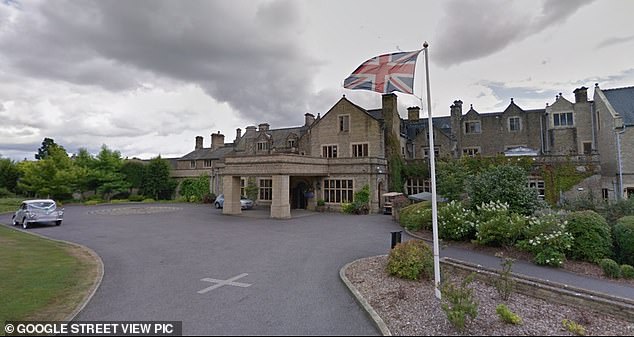 The hotel is pictured above on Google street view. It is a popular wedding venue

‘We’ve had people come from around the world, a few years ago one couple had come from Holland specifically for it as they love rhododendrons and wanted to see it in bloom.

‘At the moment it’s just me and a few other staff and a few security workers who get to see it.’

Mr Collins has been tending to the plant for nine years. He said he hoped a photograph of such a beautiful display of springtime will give Britons a boost.

The gardener, from Horsham, said: ‘This rhododendron is always the first to bloom so it’s always nice to see as it means summer will soon be on the way.

‘We are now getting some glorious weather so hopefully that and seeing this rhododendron will help lift the spirits of people.’ 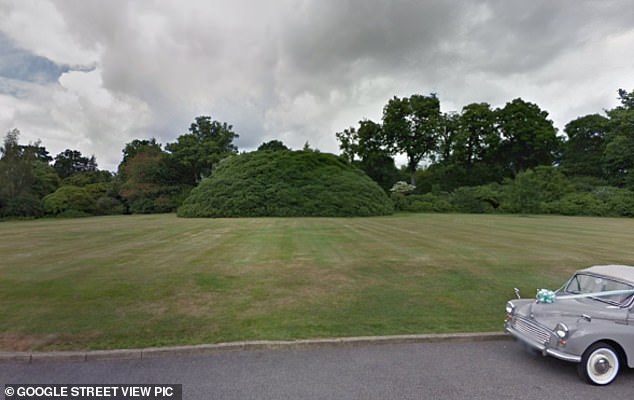 He added: ‘I reckon it’s going to put on a big growth spurt this year and it will be even bigger next year.

‘Hopefully by then we will be back to normal and people can actually come and see it.’

Explorer, Mr Du Cane Godman, a Cambridge scholar, planted the bush after his family bought the hotel and its grounds in 1883.

He travelled the world, compiling a natural history classification of more than 50,000 species, gathering a large collection of rare orchids, alpine plants and magnolias with his second wife Dame Alice.