A copy of a draft of a Supreme Court decision to overturn Roe v Wade was leaked late Monday night, indicating that the highest court in the land is likely to end the constitutional right to access abortion care that has been protected since the 1973 decision.

So, any changes to abortion laws are a parenting issue.

Written by Supreme Court Justice Samuel Alito and obtained by Politico, the draft says, that "it is time to heed the Constitution and return the issue of abortion to the people’s elected representatives.”

The draft says that both Roe v. Wade — the 1973 Supreme Court ruling that guaranteed federal and constitutional protections to access abortion care prior to fetal viability (around 23 weeks gestation) — and Planned Parenthood v. Casey — the 1992 decision that maintained the right — should both be overturned.

“Roe was egregiously wrong from the start,” Justice Alito wrote. "Its reasoning was exceptionally weak, and the decision has had damaging consequences."

Supreme Court Justice John Roberts issued a statement in the wake of the leaked draft, confirming that it's authentic and condemning the leak. The Court has not made any official ruling on the Mississippi 15-week abortion ban, including the decision to overturn Roe and Casey. Justice Roberts said the draft does not mean the Court will inevitably make such a ruling. The justices' votes could change.

Currently, abortion care is legal in all 50 states. 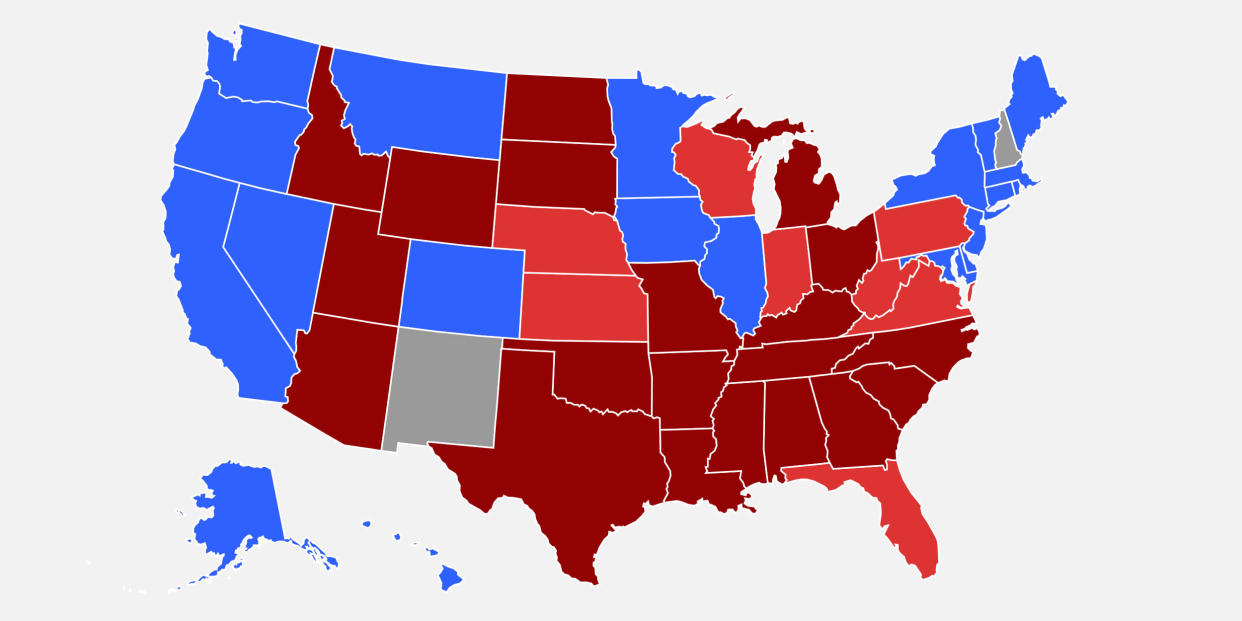 If the Supreme Court does strike down Roe v Wade, many states are certain or likely to outright ban or severely restrict access to abortionSome of the moms have gone on to volunteer and or work for abortion funds and other reproductive justice groups..

Six in 10 Americans support access to abortion care, according to the nonpartisan Pew Research Center, and a reported one in four women — as well as trans men and non-binary people — will have an abortion in their lifetime.

In addition, 66% of women who have had an abortion “plan to have children when they are older" and more financially stable, according to a report published by National Abortion Federation (NAF), and the majority of abortion patients have at least one child at home.

TODAY Parents put out a call on social media and spoke to seven moms who have had abortions about their reaction to the potential Supreme Court ruling that would overturn Roe v. Wade. Some of the moms have gone on to volunteer and or work for abortion funds and other reproductive justice groups. Some asked that their last name be withheld to protect their privacy. Their comments have been edited for brevity and clarity.

"My initial reaction was shock, even though I knew it was going to happen. When you have a visual, it just hits different. I felt shock, horror and sadness.

"My ability to have an abortion is why I am a mother in the first place. If it had not been for my first abortion, I wouldn't have been able to have my daughter today, who I planned in a healthy, stable environment. Both my abortions have been very impactful.

"I'm very grateful that despite all the barriers I was able to find a way, and I was supported by so many loved ones, to have an abortion. If I had not had that abortion, I would have been stuck in an abusive relationship and I don't know if I would be here today — that's how bad things were at one point. And I would have been forced, if I even made it that far, to raise a child in a very unhealthy environment — a child that I did not want. I would not have graduated college, I would have no money, and I don't know what kind of living situation I would be in.

"I wouldn't have the life I have today without my first abortion. I would not have my daughter, who I love so much."

"I was angry, but unsurprised. I thought that expecting Roe to fall would diminish how bad I felt when it ultimately did, so I’ve been a little taken aback by just how profoundly furious and sad I am today.

"Without my abortion, I’m not even sure I would still be alive. The man who impregnated me later severely assaulted me, and if I’d had a child by him and been tied to him … I just don’t know. Not to mention I never would’ve had the chance to build the life that now upholds the material and emotional resources I’m able to give my child.

"My experience of being his mom has been an absolute life-defining joy, and truly it just never would’ve happened if not for my abortion years before he was born. I also know that the option to have an abortion when I got pregnant with him was a big factor in how I mentally related to that pregnancy — I knew I chose it. I chose to be his mother. That element of choice totally reframes how you experience all the hardships and exhaustion that come with being a mom.

"If it had been forced on me, enduring those same things would've felt wholly intolerable. Choosing to be a mother is a wonderful thing, and without abortion access you completely re-contextualize how even pregnancies and kids that might’ve ultimately been wanted are experienced by mothers who had no choice.

"I think about that a lot."

"I am gutted. We knew it was coming, and even expected a potential timeline similar to this one.

"But to see the hateful and ignorant rhetoric, the denigration of settled law and the right of Americans to bodily autonomy and privacy in their health care, and the total lack of respect for people with uteruses — physically, emotionally, spiritually, financially, and logistically — and by extension of the children they do have, and their families, was shattering.

"Most people who have abortions are already parenting one or more children, and many more go on to have children after their abortions. This means they know what pregnancy, childbirth, and parenting entail.

"My own abortion enabled me to love and care for my baby in all the ways he needs and deserves."

"My heart just dropped. It's disheartening, and I definitely feel emotional about it. The assault on women's bodies and our lives and our health care and our choices — it's scary to me.

"I had my abortion when I was 19 years old. I was working a crummy retail job and, thankfully, I was able to get medical coupons to pay for it. I was able to go to a clinic and get the proper health care treatment. Now I'm the mother of a 2-year-old because I was able to get my life in a place where I wanted to be a mother.

"I was also able to go to college. I got my master's degree, I met my husband and we got married. And we were together for a while before we decided to have kids.

"I have a son, so this will impact him in different ways. But this affects men as well. He may not be able to make life decisions with his partner about what's going to be best for the both of them, and that's scary. Having a kid is a huge responsibility and it's a huge commitment and it's one that you should be able to make on your own and not be forced into.

"It's a beautiful thing, being a parent, but it's also the hardest thing I've ever done. I'm just so grateful that I was able to make that choice when I was able to. I want that for my children."

"Hearing the news devastated me. We all knew this was coming, but it doesn’t make the reality of it any easier to accept. Those of us in states hostile to abortion have already been living in a post-Roe world, and we’ve known for a long time that we cannot count on our government officials to protect us — we can only count on each other.

"For months, thousands of people have been forced to travel out of state while others have had to continue pregnancies they weren’t ready or prepared for. And when Roe is overturned, people living in states who’ve enacted trigger bans are going to wake up in Texas. We know the outcome of this because we’ve been living it since last September.

"My abortion allowed me to be the parent I am today. As parents, we know our limits and boundaries when it comes to expanding our family — and we know that better than the old, white men passing these extreme bills. Whether someone agrees with my decision or not, no one should be stripped of their right to make an informed decision for themselves."

"My first reaction was numbness, a lack of surprise and profound sadness, all at the same time.

"And there's just so much going on in the world right now, so this feels like yet another layer, yet another massive thing for us to wrap our heads around collectively. It feels pretty exhausting, at this point, to hear this news, even if it felt inevitable.

"I thought back to the 23-year-old I was when I had an abortion, and feeling pretty burdened by the stigma of abortion, despite living in a state where I could very easily access a medication abortion. I just thought back to myself at that time, being so unprepared to be a parent. Now I have a 2-year-old, and some days I still feel unprepared to be a parent.

"The last eight years I've been able to be the professional that I am at the level that I'm at, and I — along with my husband — have been able to offer a life to our daughter that feels like the life we want to be able to give our child, and not the life we were living when I had an abortion.

"I'm an attorney, so I've been following this very closely and I wasn't surprised by any stretch of the imagination. But for some reason, actually hearing (Alito's) words was very shocking to me. And disgusting. I felt disgusted.

"I also felt a really visceral reaction, that I was somehow failing my daughters. We were given this right when we were children — we've grown up with it. And now my daughters are in danger of having their bodily autonomy intruded on in a way that I've never experienced. And it just really angered me.

"I had my abortion two days before the six-week ban came down in Texas. I was still really early in my pregnancy, but we had to rush to have it done. And one of the reasons why I got the abortion was so that I would be better able to take care of the daughters I have now. I was very sick with one of my pregnancies and health issues would have been a serious concern for me, if I had carried the pregnancy to term.

"I need to be there for my 7-year-old and my 9-year-old. That was extremely important to me.

"We're getting pulled backwards in what feels like slow motion."

*Name has been changed in order to protect the person's privacy.