The senior policeman responsible for culture and standards at the Victoria Police recruits college, who was once lauded for shooting dead an Islamic extremist, is fighting for his job after being accused by the force of gross racism, homophobia, sexism and bullying.

Senior Sergeant Niall Waring is revered in the force for thwarting a 2014 terror attack, but is facing an internal disciplinary charge of disgraceful conduct after he was accused of calling a female Muslim police officer at the training college a “ninja” in an apparent reference to her Islamic head covering. 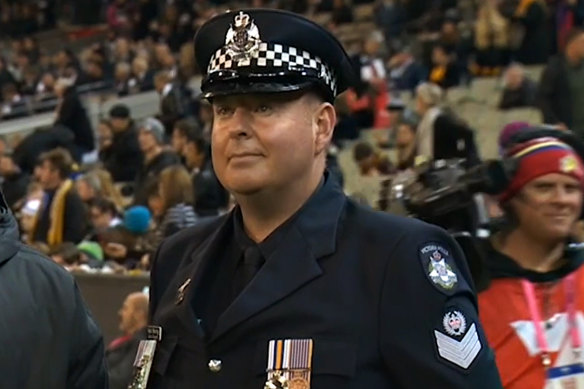 Multiple legal sources with knowledge of the case against Waring confirmed he is also accused of making racist comments to another Muslim officer, in that he allegedly said all Muslims are terrorists and that he shoots “your people”.

He allegedly called a Middle Eastern police recruit “Sammy bin Laden” and labelled a male police officer a “faggot”. Waring also allegedly made derogatory remarks about female colleagues and their appearance and an African-Australian policeman.

Several experienced female police officers have complained that Waring bullied them because of their gender. Up to eight female officers, who claim to have been bullied and harassed, are among witnesses due to give evidence in the high-stakes disciplinary case, sources say.

In his role as head of the conduct and welfare unit of the Victoria Police Academy, Waring was responsible for identifying and managing police recruits who have engaged in misconduct while also managing their welfare.

Waring stopped a 2014 terror attack at Endeavour Hills police station that involved Islamic State-inspired Melbourne man Numan Haider. Haider, 18, attacked the policeman and a federal counter-terror detective with a knife in September 2014 and, even though he had been stabbed, Waring shot Haider in the head, killing him and preventing his plan to execute police.

Former prime minister Tony Abbott is among Waring’s prominent backers, having met him after the terror attack and remained in contact.

Waring will appear before a police disciplinary hearing on Tuesday, months after he was arrested and suspended by internal investigators.

His arrest was linked to a suspicion he might have committed a criminal offence under the anti-bullying “Brodie’s law”, although internal affairs officers later chose to subject him only to an internal disciplinary hearing, which suggests there was insufficient evidence to mount a criminal bullying case in court.

In a statement, Victoria Police confirmed the senior sergeant “has been suspended with pay pending an internal disciplinary hearing”.

“The 46-year-old man was suspended following allegations of misconduct in Glen Waverley between 2019 and 2020 while he was on duty … The matter is being dealt with through the disciplinary stream after an internal investigation found it did not meet the threshold for criminal charges.”

The news of the disciplinary charges will be highly controversial within the force due to Waring’s role at the academy, which is responsible for training all new officers and improving culture and standards throughout the force.

However, Waring has strong backing in pockets of the force and in political and community ranks, including those who believe the disciplinary charge is unwarranted. One academy insider said the training college was toxic, and many staff suffered from mental health issues, poor morale and a “bullying environment”.

The source, who was not authorised to speak publicly, also said Waring had not received appropriate mental health support from police after the Haider terror attack, and that this might have contributed to some of his alleged conduct.

“He should have had someone in the force making sure he was coping. I don’t condone the [alleged] behaviour, but Victoria Police has to be responsible for some of it,” the source said.

Another academy source said the scandal had left alleged victims feeling broken and unsupported by the force. A third source said the academy had failed to effectively implement programs meant to prevent harassment and improper workplace behaviour.

Waring’s charging with disciplinary offences raises serious questions about the management of the academy, which trains new and mid-career police officers and is meant to play a key role in combatting the force’s historical cultural problems around discrimination and harassment on gender and cultural grounds.

The Age is not suggesting the allegations made against Waring are true, only that they have led to his internal charging with disgraceful conduct. He did not respond to efforts to contact him, but is understood to vehemently oppose the force’s handling of the case against him.

Next week’s disciplinary hearing will test the key evidence gathered by internal investigators and assess if the case against Waring is substantiated. If it is, he could be sacked, demoted or counselled.

The police union declined to comment on Waring’s case when contacted by The Age.

The Waring case is not the first time the police academy has faced allegations of hosting bullying and discrimination. In 2008, The Age reported the academy’s school of investigation would be subject to a major shake-up after a high-level inquiry found evidence of nepotism, bullying of anti-corruption detectives and misogyny.

At the time, the police union slammed plans to overhaul the school that trains police to become detectives, describing as “ridiculous” moves to boost the number of female or non-police instructors.