London: The British Health Minister warned that coronavirus vaccines may be less effective against new variants of the disease, such as those found in South Africa and Brazil, and that stricter border controls are justified.

“We don’t know the degree of that,” Matt Hancock said in an interview on Sky News on Sunday, commenting on the extent of any potential reduced efficacy of the vaccines. “In the meantime, we’ve got to have a precautionary principle that says let’s not bring these new variants back to the UK.” 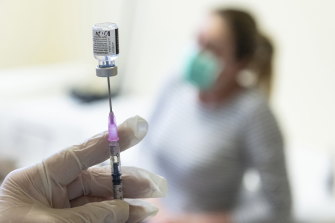 A nurse prepares a dose of Pfizer-BioNTech vaccine. Health authorities remain concerned how it will work against new strains of the coronavirus.Credit:AP

Hancock’s warning came as Britain reported it had vaccinated more than 5 million people, including three-quarters of those over 80. Hancock said the government is conducting a vaccine trial on the South African variant to study its response to the inoculation, and that he’s concerned about new variants developing elsewhere.

“The new variant I really worry about is the one that’s out there but hasn’t been spotted,” he said, adding that the UK is offering its genome-sequencing capability to other countries to help them identify new strains. There are 77 known cases of the South African variant in Britain, and at least 9 cases of the Brazilian variant, Hancock said on the BBC’s The Andrew Marr Show.

The UK has already banned flights from South Africa and neighboring countries, plus all of South America, in a bid to stop the spread of the new variants. Hancock said the government didn’t rule out introducing even stricter international travel measures in the days ahead.

Britain is grappling with the highest death toll in Europe from the disease and battling to recover from its deepest recession in more than 300 years. The latest data published on Sunday reported another 610 deaths, taking the UK’s total to 97,939. The government is also on alert over signs that a local variant of the virus, which is as much as 70 per cent more transmissible, may be more deadly than the original strain.

The supply of vaccines – not distribution by the National Health Service – is the rate-limiting factor in the UK’s vaccination effort, Hancock said. Some 6.35 million people have now received their first dose, the latest figures showed, with Britain well ahead of other European countries.

Hancock couldn’t confirm that schools would be open again by Easter, saying that the government would have to look at the data around the pandemic at the time. While the government also wants to lift social restrictions as soon as possible, Hancock added that it’s too early to give any more details on potential easing.

“There is early evidence that the lockdown is starting to bring cases down but we are a long, long, long way from being low enough,” Hancock said on Sky. “You can see the pressure on the NHS, you can see it every day.“