Victorian health authorities are scrambling to make contact with 128 passengers who were on a Virgin flight to Melbourne on Friday with a potentially infectious flight attendant.

North Melbourne Football Club staff and players are isolating while they await coronavirus test results after travelling through the airport on Saturday, and three mine workers are isolating in Victoria, as they were at the same Northern Territory site as another positive COVID-19 case. 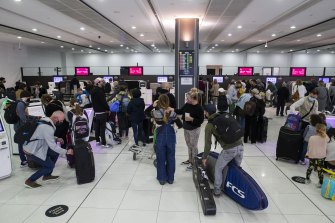 Passengers at Melbourne Airport Terminal 3. A Virgin Australia Airlines flight steward who has tested positive for COVID-19 had been on a number of flights around Australia whilst infectious with the virus.Credit:Paul Jeffers

The female cabin crew member, who tested positive to COVID-19 on Saturday evening, flew into Melbourne on Friday on flight VA334 from Brisbane.

She stayed overnight at the Holiday Inn Express at Southbank, but Victoria’s COVID-19 commander Jeroen Weimar stressed she abided by strict COVID-19 protocols during her time there.

“A closed crew shuttle took her to the hotel, she stayed in the hotel all night, then [took the] crew shuttle back into the [Melbourne Airport],” Mr Weimar said during Sunday’s coronavirus update.

“We’ve obviously listed the exposure site as a coffee shop at the airport – beyond that, we’re reasonably comfortable that based on our current understanding, that we’ve got control of this.”

Victoria’s Department of Public Health has also recorded all public areas of Melbourne Airport Terminal 2 as exposure sites between 6.30am and 7.30am on Saturday.

Terminal 3 is listed as being an exposure site between 5.20pm and 6.50pm on Friday and again on Saturday between 8am and 9am.

NSW Health on Saturday night issued a public health alert for the flights, saying all NSW passengers were being considered close contacts and must call its COVID-19 line (1800 943 553), get tested, and isolate for 14 days, regardless of the result.

In a statement, the airline said the affected crew member is Sydney-based, and a close contact of a positive COVID-19 case from a known cluster in Sydney.

Virgin said the flight attendant was in isolation, and the company was contacting all staff who are deemed close contacts. All would be asked to get tested and isolate.

Mr Weimar said it was his understanding that the flight attendant was very early in her infectious period, but nonetheless, authorities were taking a cautious approach after she tested positive to coronavirus.

North Melbourne staff and players were sent into home isolation and told to get tested on Sunday after attending the airport on Saturday on the way to Hobart for their match against Gold Coast.

The Roos were at Melbourne Airport between 7-8am on Saturday, and now must await a negative a result.

Victoria recorded no new local cases of COVID-19 in the 24 hours to midnight on Saturday, despite the COVID-19 scare with the flight attendant having tested positive.

Three new cases were recorded in hotel quarantine, while nearly 20,700 test results were processed in the past 24 hours and nearly 15,000 people received their vaccine doses.

However, Mr Weimar revealed on Sunday that Victorian health authorities had so far identified three miners in the state who worked at the same Northern Territory site as another positive COVID-19 case.

He said the trio was isolating and being supported to get tested for coronavirus.

They were among 900 people across Australia who worked at the Granites gold mine in the Northern Territory while the man was potentially infectious.

“We expect that number to grow as we work with other jurisdictions to identify where those other 900 mine workers have travelled to,” Mr Weimar said.

“We understand they may have travelled fairly widely across Australia.

“If you were at the Granites gold mine between [June 19 and 25], please, stay where you are, isolate, get tested and contact us, so we can support you during this isolation period.”

The Granites mine is about 250 kilometres from Yuendumu.