Oracle of Omaha now has a successor: Warren Buffett says Berkshire Hathaway Vice Chairman Greg Abel will take over when he’s no longer at the helm 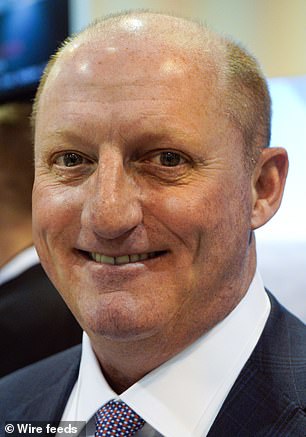 The next Oracle of Omaha? Greg Abel was publicly named Warren Buffett’s successor – when the current oracle is no longer

Warren Buffett finally has disclosed a tightly held secret that investors in his Berkshire Hathaway have long wondered: Who will take over when the 90-year-old Oracle of Omaha is no longer at the helm?

Buffett said Greg Abel, now the company’s vice chairman, will step into the top role based on a plan of succession for the $650 billion company that was potentially disclosed by accident during the firm’s annual meeting over the weekend.

At that meeting, Vice Chairman Charlie Munger, 97, was answering a question on how Berkshire’s ‘decentralized’ culture would survive without he and Buffett running the show.

‘Greg will keep the culture,’ Munger responded – perhaps letting the cat out of the bag, as neither he nor Buffett have ever publicly discussed a succession plan, other than to say that one exists.

Buffett on Monday confirmed that indeed Abel was the next man in line should he decide to step down or die.

‘The directors are in agreement that if something were to happen to me tonight, it would be Greg who’d take over tomorrow morning,’ Buffett told CNBC.

At the moment, Abel, 59, oversees all of Berkshire Hathaway’s non-insurance businesses: Those include the BNSF Railway, Duracell batteries, Dairy Queen and NetJets, along with a long list of other companies part of the mega-conglomerate.

(Another deputy, Ajit Jain, 69, oversees the company’s insurance operations, which include Geico and General Re.)

Buffett isn’t retiring anytime soon, he said. And his daughter, Susie Buffett, said people needed to stop worrying about her father’s age – that he was going to be around for the long haul. 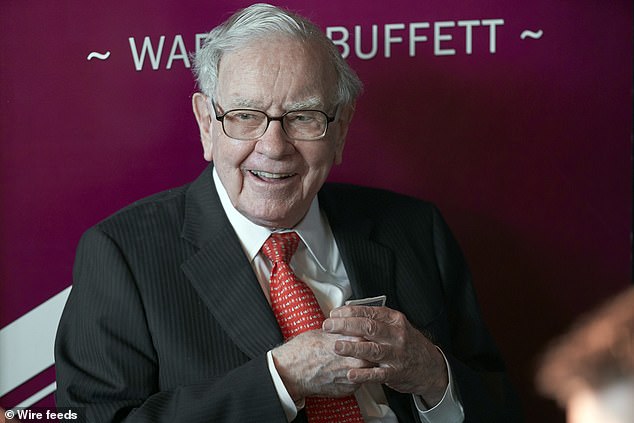 Warren Buffett is known as the Oracle of Omaha, his hometown and the headquarters of his Berkshire Hathaway, a $650 billion conglomerate that’s the world’s fourth-biggest company, according to calculations by Forbes 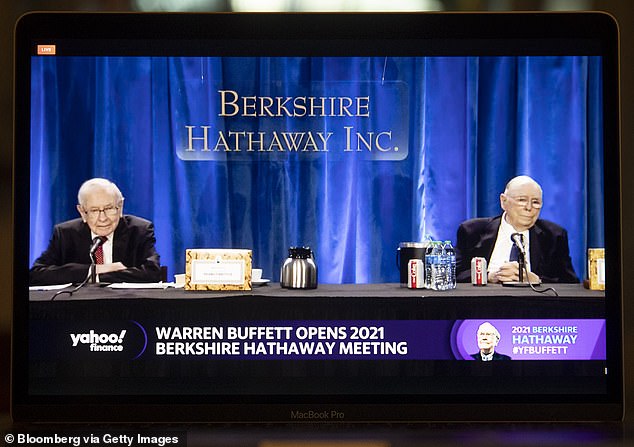 Warren Buffett, left, and Charlie Munger, right, the No. 1 and 2 at Berkshire Hathaway, faced investors and journalists at their annual meeting over the weekend. It wasn’t in person for the second year in a row because of COVID-19 restrictions

Buffett has engendered almost cult-like loyalty among his investors and other followers, with nearly 40,000 people each year making the trip to Omaha for the ‘Woodstock of Capitalism.’

The annual Buffett-palooza was canceled in 2020 and this year because of the COVID-19 pandemic – with the marathon day-long question-and-answer session between investors and the Buffett-Munger duo instead being broadcast online.

He’s garnered such devotion because of the returns he’s put up: For instance, if someone invested $1,000 with Buffett in 1965, that same money would have been worth nearly $30 million by spring of 2020, according to Barron’s calculations – a gain of nearly 3 million percent.

If that money were invested in just the broader stock market, it would have been worth only $200,000.

For when Buffett does eventually step down or die, if for some reason Abel isn’t able to take the job, Buffett said Jain would then become CEO.

Buffett said both Abel and Jain were in the running as successor, but the fact that the 59-year-old Abel is 10 years younger than Jain helped seal the deal, he said.

‘They’re both wonderful guys, Buffett said. ‘The likelihood of someone having a 20-year runway, though, makes a real difference.’

Berkshire has long planned to split Buffett’s job into three parts when he is gone: a CEO to oversee capital allocation and Berkshire’s operations, investment managers to handle Berkshire’s stock portfolio and a separate board chairman, according to the Associated Press. 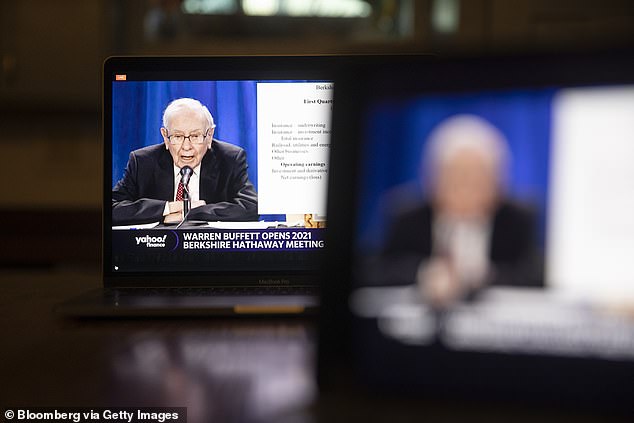 Buffett, 90, has said he has no plans to retire and his daughter said she’d ‘bet a lot of money’ that he lives until 100 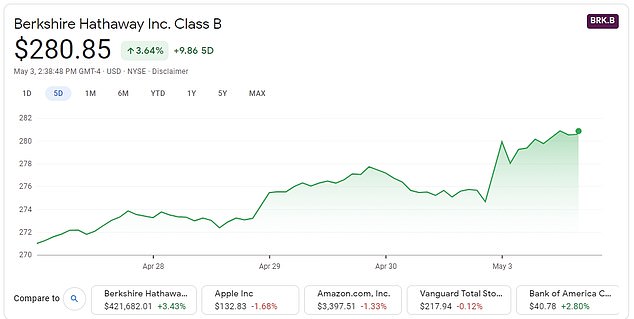 Berkshire Hathaway’s Class B stock gained more than 3.5 percent on the day, far outstripping the broader market, which was up only around one percent

Buffett has named two investment managers who already help manage the portfolio and said that his oldest son, Howard Buffett, who already serves on Berkshire’s board, is likely to become the company’s next chairman.

Howard Buffett has vowed to keep the company in Omaha, where it employs only around two dozen in its home office, but oversees a sprawling conglomerate with more than 360,000 employees around the world.

Investors appeared to approve of the news of succession, sending Berkshire stock up by more than 2 percent by late afternoon trade – outpacing the broader market’s gains of around 1 percent.

Edward Jones analyst Jim Shanahan told the Associated Press that it Abel’s designation as Berkshires likely next CEO wasn’t a surprise given the role he has had overseeing many of Berkshire’s more than 90 subsidiaries since 2018, including BNSF railroad, all of Berkshire’s utilities, retail and manufacturing companies. 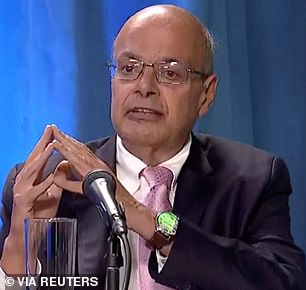 Ajit Jain, 69, another vice chairman of the company, had been thought to be in the running to be Buffett’s successor

‘We have a great deal of comfort with Abel as CEO and with the overall future leadership of the company. I think he has proven to be a really effective leader,’ said Shanahan, who pointed out that Abel handled questions about Berkshire’s efforts to respond to climate change well at the annual meeting.

Abel came to Saturday’s annual meeting prepared with presentation slides and lots of background information about what Berkshire’s utilities and BNSF have done to reduce carbon dioxide emissions.

It’s a subject he knows well because the Canadian executive led Berkshire’s utility division for more than a decade before he became a vice chairman, and he remains based on Des Moines, Iowa, where the utility unit’s headquarters is and where he lives.

It’s unclear whether he will move to Omaha.

Plus, Abel is available whenever needed, which Weber took advantage of last year when the coronavirus pandemic shut down all the retail stores that sell Brooks’ shoes.

‘I wanted to get his insight into what he was seeing in the economy and at the other businesses. He´s seeing a large part of the economy just like Warren always has,’ Weber said.

Abel encouraged Weber to focus on Brooks’ customers during the pandemic, which helped lead the company to shift to online sales and set sales records because people kept running even with the coronavirus restrictions. 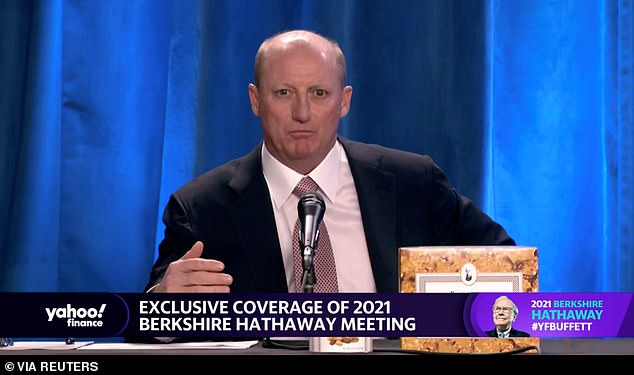 Abel was said to have come to the annual meeting, which was broadcast online for the second time because of COVID restrictions, with binders full of information on Berkshire’s operating companies