CYBER-SECURITY pioneer John McAfee was for many years a gun-toting fugitive in hiding from the US Government.

Here's why the McAfee antivirus software creator was always on the run from the authorities. 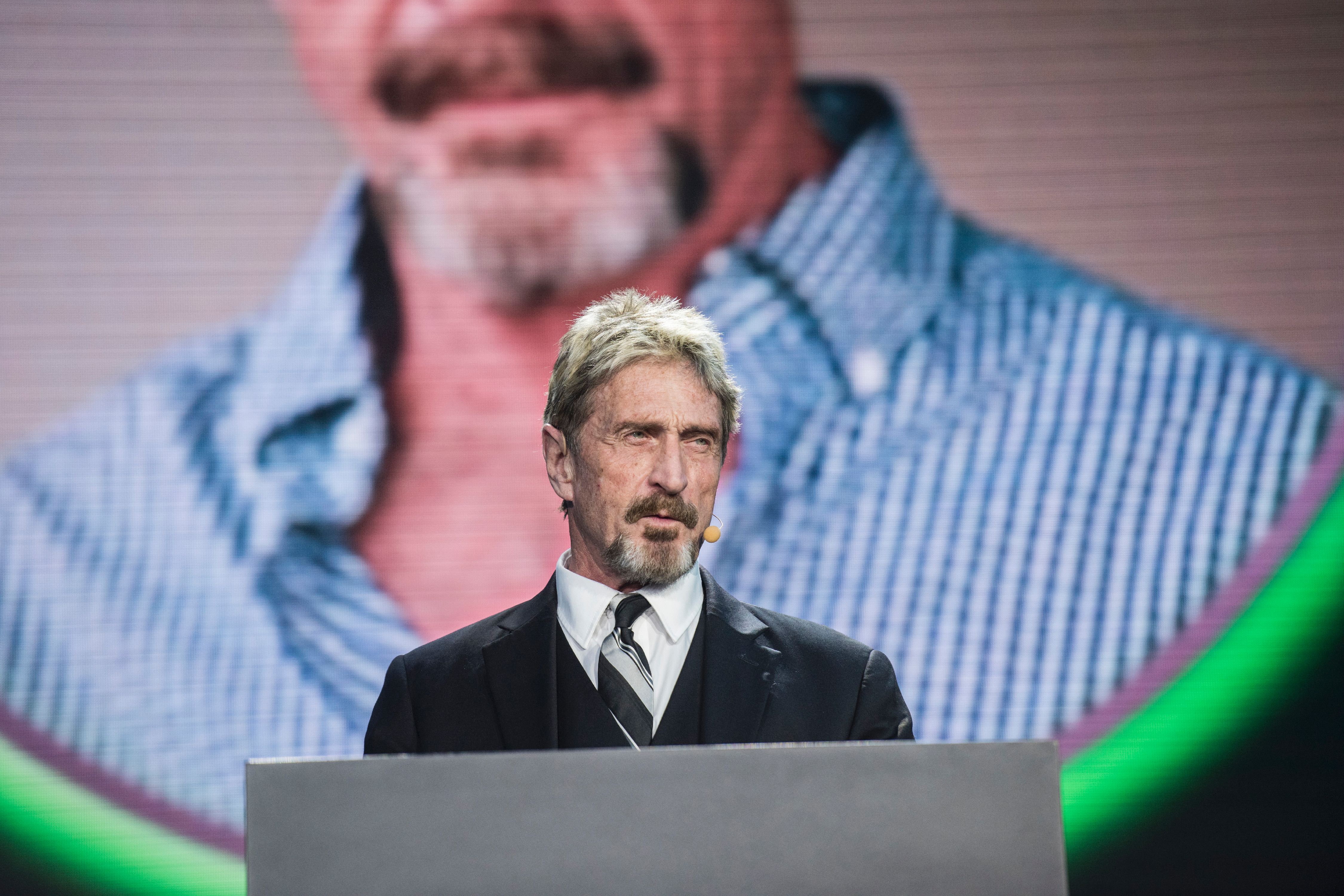 Why was John McAfee on the run?

The outlandish security software pioneer tried to live life as a hedonistic outsider while running from a host of legal troubles.

His death came just hours after a Spanish court announced that it had approved his extradition to the US to face tax charges punishable by decades in prison, authorities said.

He had been arrested after being charged with evading taxes after failing to report income from promoting cryptocurrencies while he did consulting work.

McAfee was among other things a cryptocurrency promoter, tax opponent, US presidential candidate and a fugitive.

He also publicly embraced drugs, guns and sex, amid a history of legal woes spanning from Tennessee to Central America to the Caribbean.

For example in 2012, he was sought for questioning in connection with the murder of his neighbor in Belize, but was never charged with a crime. 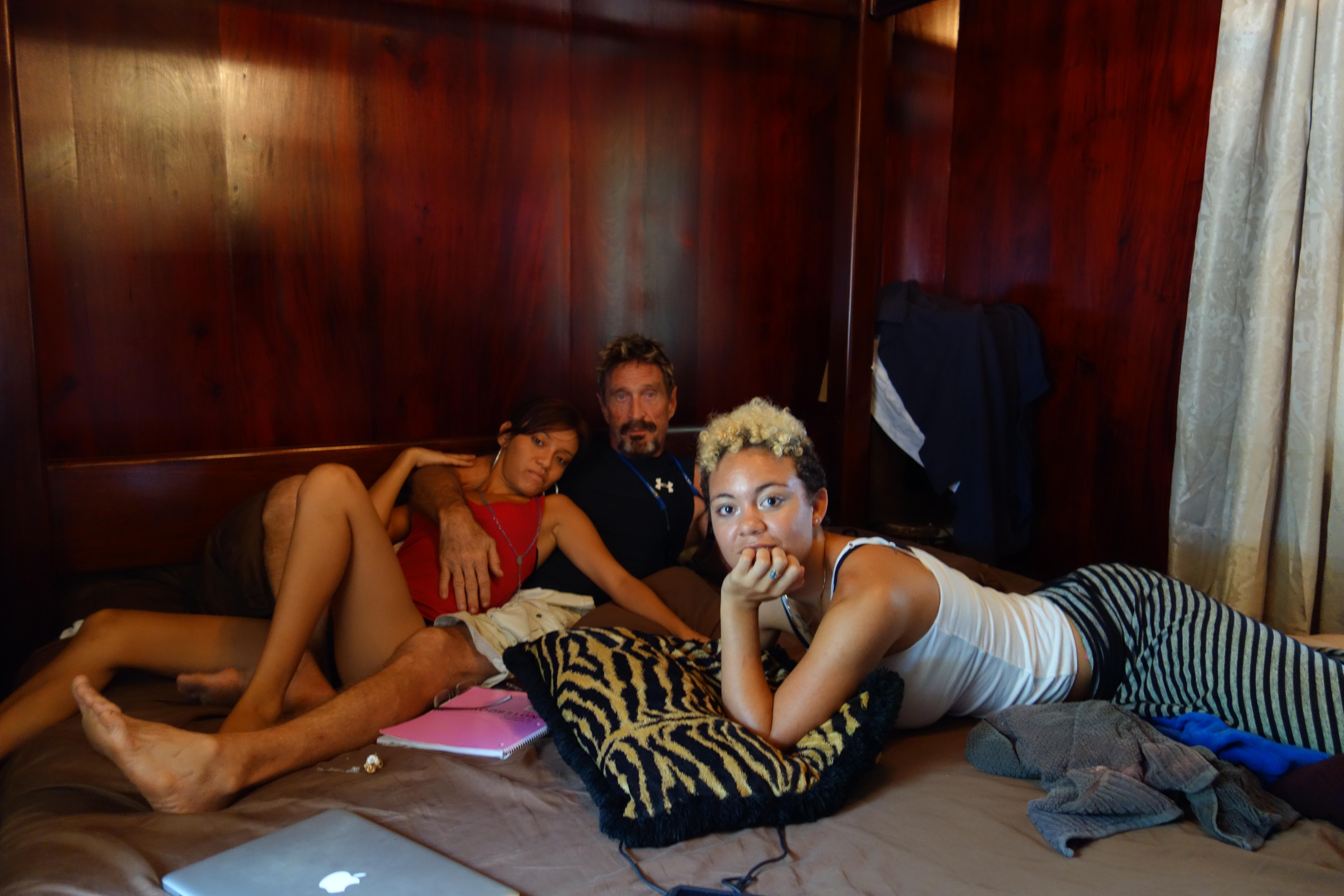 Gregory Faull was shot to death in early November 2012 on the island in Belize where both men lived.

Faull, a wealthy American, was found in his home with a single gunshot to the head and bearing signs of having been tortured with a taser.

He is reported to have been in an earlier dispute with McAfee about noise made by McAfee's dogs, and to have told another neighbor he was going to "take matters into his own hands".

McAfee then fled to Guatemala after being questioned by police, and was later deported back to the United States.

He later claimed he had been forced to flee because Belize authorities were trying to kill him.

But Belizean cops denied that, saying they were simply investigating a crime about which McAfee may have had information.

Then-Prime Minister Dean Barrow expressed doubts about McAfee's mental state, saying: "I don't want to be unkind to the gentleman, but I believe he is extremely paranoid, even bonkers." 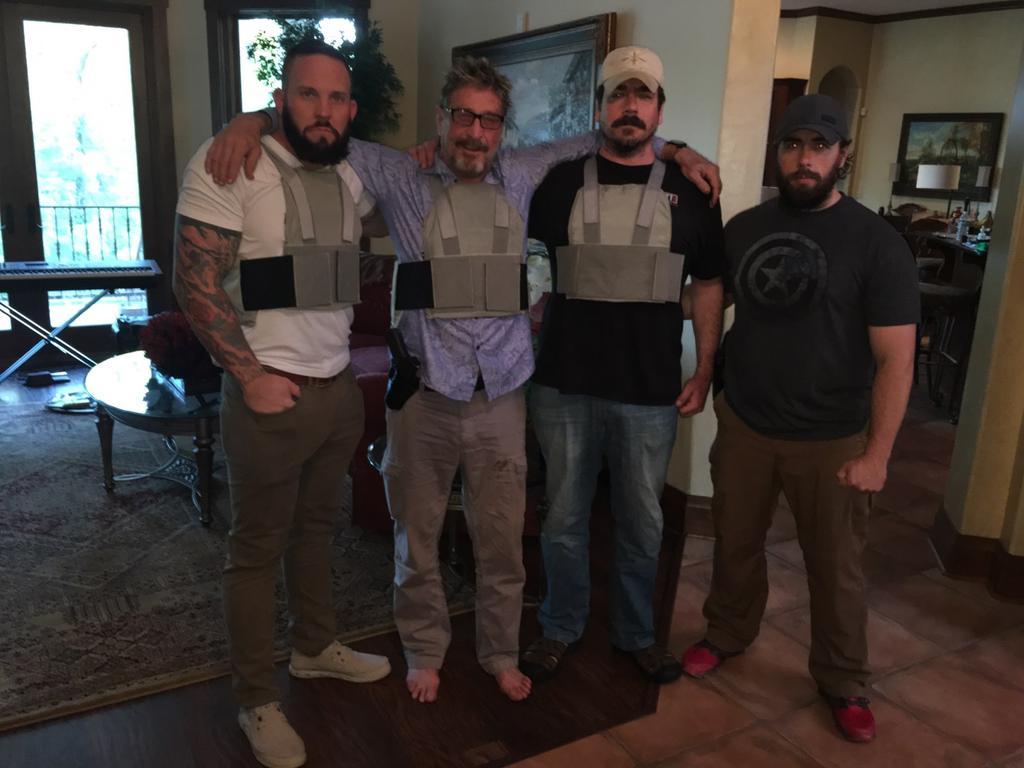 A Florida court ordered McAfee in 2019 to pay $25million to Faull's estate in a wrongful death claim.

However he refused to pay it, writing on Twitter that he has not responded to "a single one of my 37 lawsuits for the past 11 years".

McAfee claimed to have no assets, writing that the order was a "mute point" an apparent misspelling of 'moot'.

Yet the eccentric millionaire had sold his stake in his famous McAfee anti-virus software company in 1994, reportedly for $100million.

In January 2019, McAfee claimed to be living internationally on a boat.

Later that year, in July, he was released from detention in the Dominican Republic after he and five others were suspected of traveling on a yacht carrying high-caliber weapons, ammunition and military-style gear. 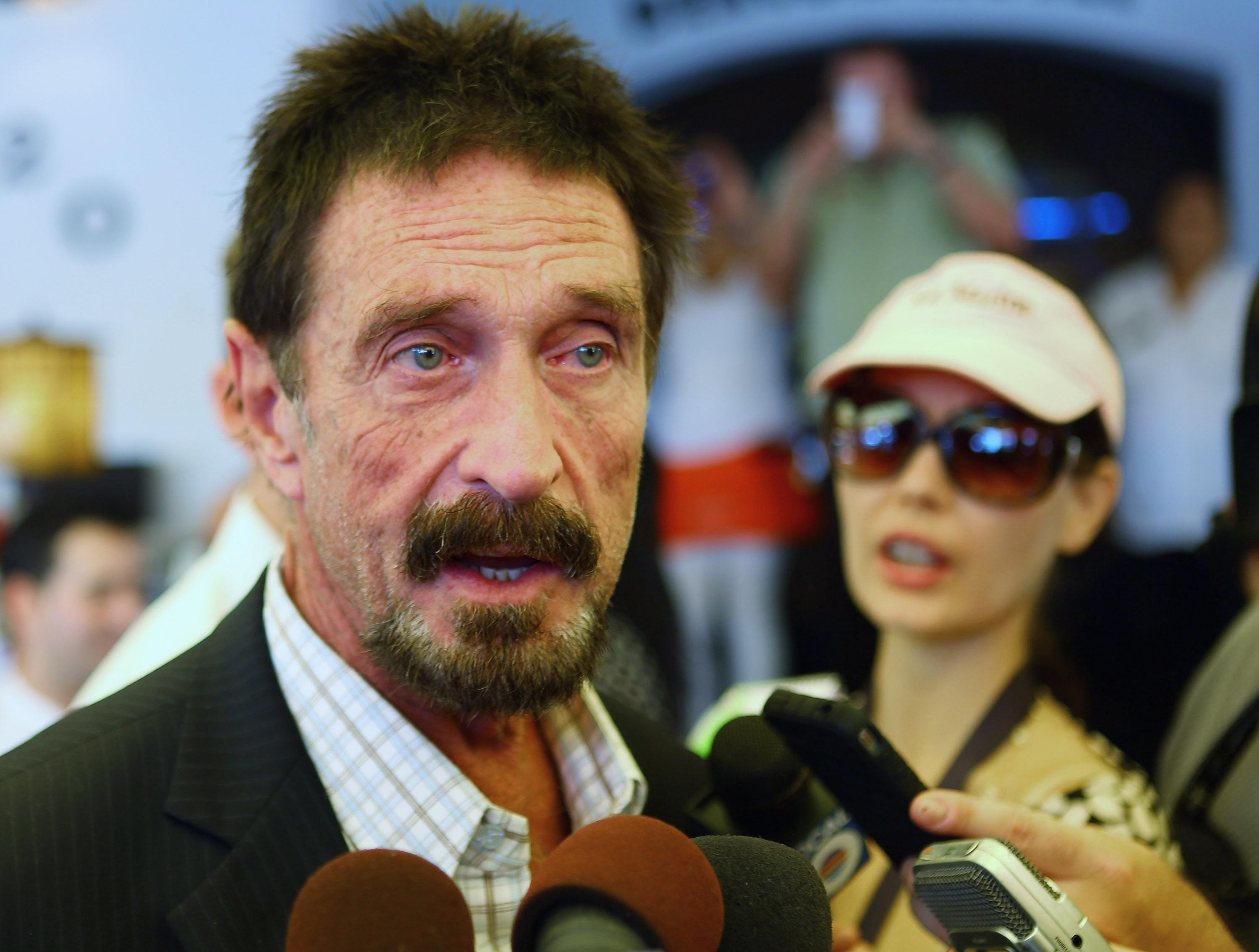 Days later he claimed to have sought refuge in London and Paris.

McAfee tweeted a picture claiming that he and his wife, Janice McAfee were sitting in a London restaurant.

He then wrote: "On the move again. The long arm of the U.S. is reaching for us here in London.

"Thank God it's a weekend. Government bureaucracy paperwork is stalled until tomorrow morning.

"We are never stalled. Will update you soon."

Four hours later, in a tweet he had stamped as having been sent from Paris, he posted pictures of himself and his wife with two other men in a hotel room, and wrote: "The bad guys never came close.

"We are out of England now and on our way to complete safety."

His location at the time that any of the tweets were published were not independently verified. 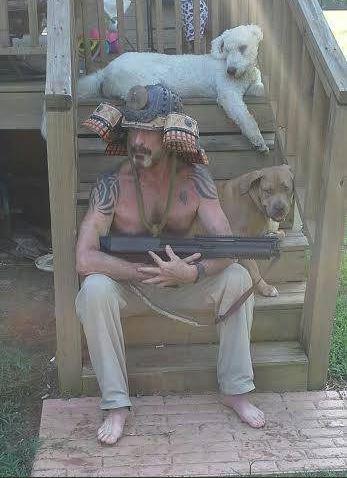 What countries did he go to?

Having been born on a US Army base in the UK, McAfee had both American and British citizenship.

He was born in Gloucestershire, England, and raised in Virginia.

The millions he made from the sale of his stake in McAfee Associates, a revolutionary computer antivirus company, allowed him to enjoy a hedonistic lifestyle.

It also helped him indulge his hobby of aerotrekking – flying unlicensed microlight aircraft at low altitude and breakneck speeds.

Having gained a harem of female followers at a sex yoga ashram he established, according to Vice, McAfee then used fake social media accounts to try to boost the sport's popularity.

But, entangled in a lawsuit over a flying accident which killed his nephew, the increasingly wacky McAfee fed the press stories about being wiped out by the financial crisis 2007-08, sold all his property at bargain prices and headed for the Central American jungle. 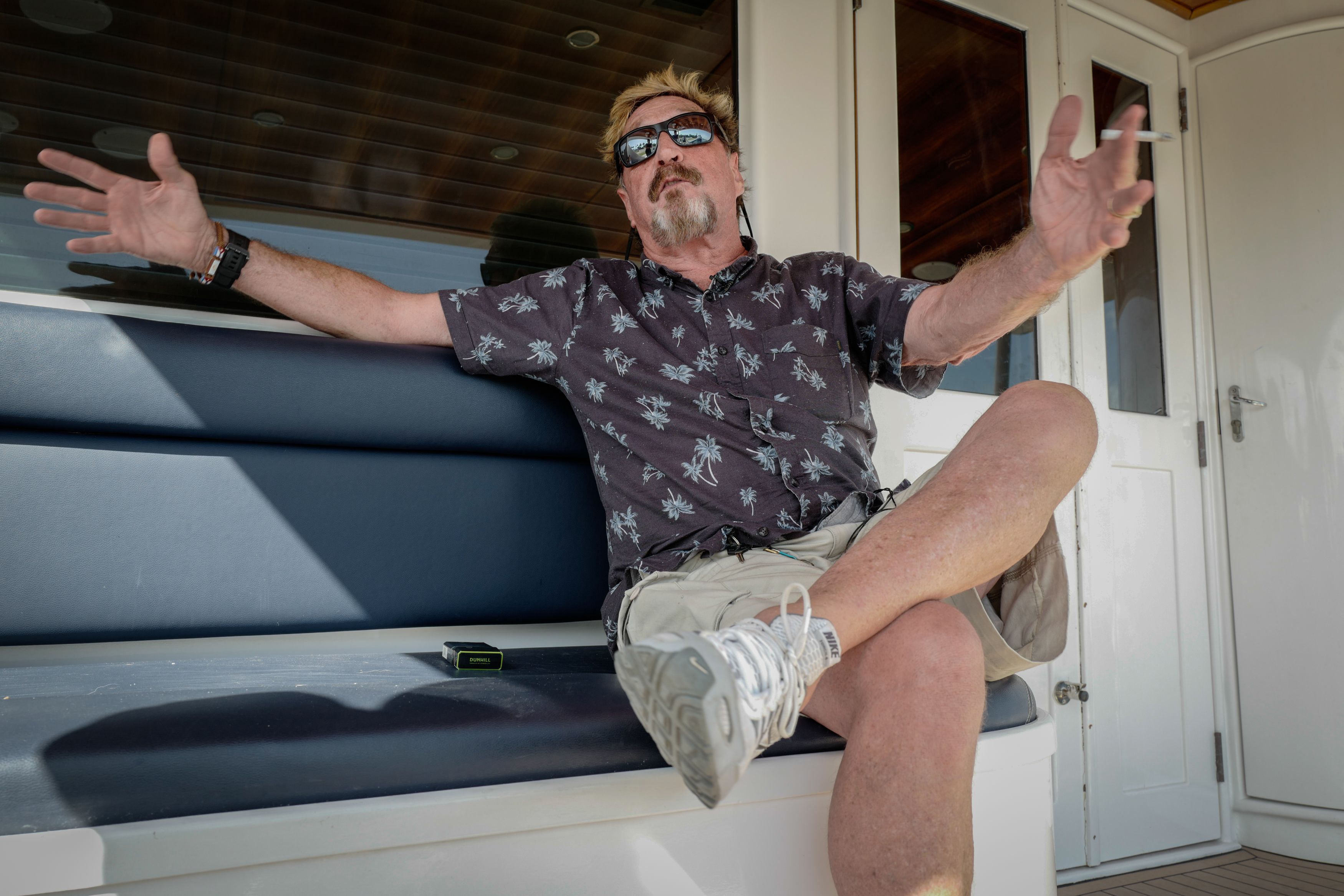 He moved to Belize in 2008, thinking he would "retire and fish, scuba dive, sail and otherwise enjoy my declining years".

He was 63 at the time, but said he only remained retired for a few months.

McAfee lived on the north island of San Pedro, where roads were impassable and the main mode of transport was the ferry service.

Although it was meant to be an escape from business, he ended up starting an antibiotics company within a few months of moving there.

At some point during this time he began posting on drug-taking message boards about attempts to purify the compounds within bath salts.

But his business venture turned to ruin when local cops raided the property in search of evidence of drug-making.

They found a cache of weapons, £15,000 in cash and some legal drug-making equipment, shot a dog, handcuffed four security guards and arrested McAfee – but they found nothing to pin on him. 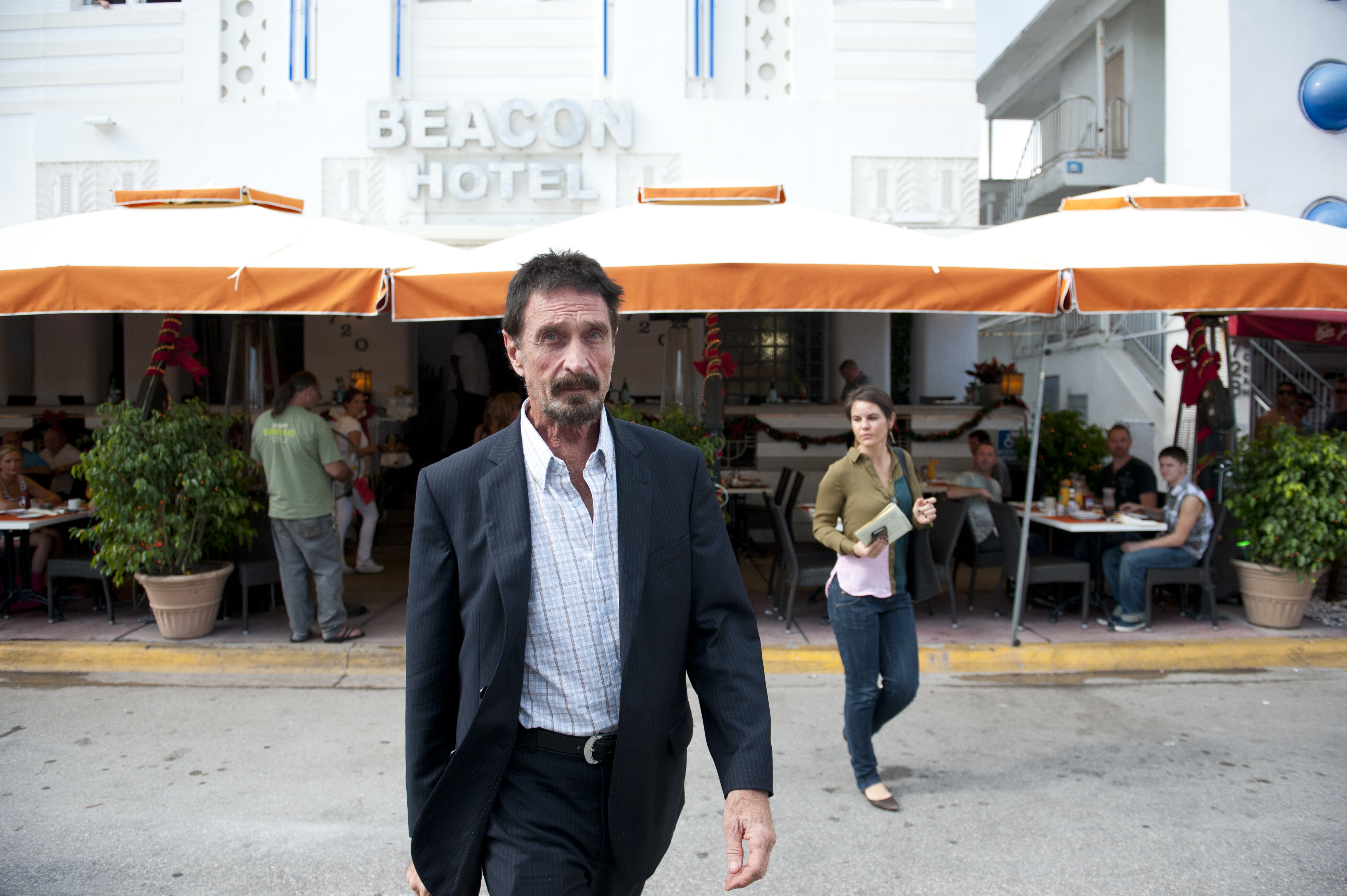 McAfee later told a Gizmodo journalist of about 12 suspected attempts on his life – a paranoia possibly fuelled his erratic drug-taking.

Finally, after a neighbor he argued with was found dead in a pool of his own blood with a gunshot wound to his head, McAfee fled the country.

He went on the run in 2012 from Belize after cops announced he was a "person of interest" after the death of his neighbor Gregory Faull.

He sought asylum in Guatemala City – but authorities deported him back to America.

Then, in 2016 he announced that he was running for president of the US as a Libertarian.

But he lost out to New Mexico rival Gary Johnson.

In January 2019, McAfee claimed to be living internationally on a boat after an indictment brought against him by US authorities related to unpaid taxes dating back to 2012. 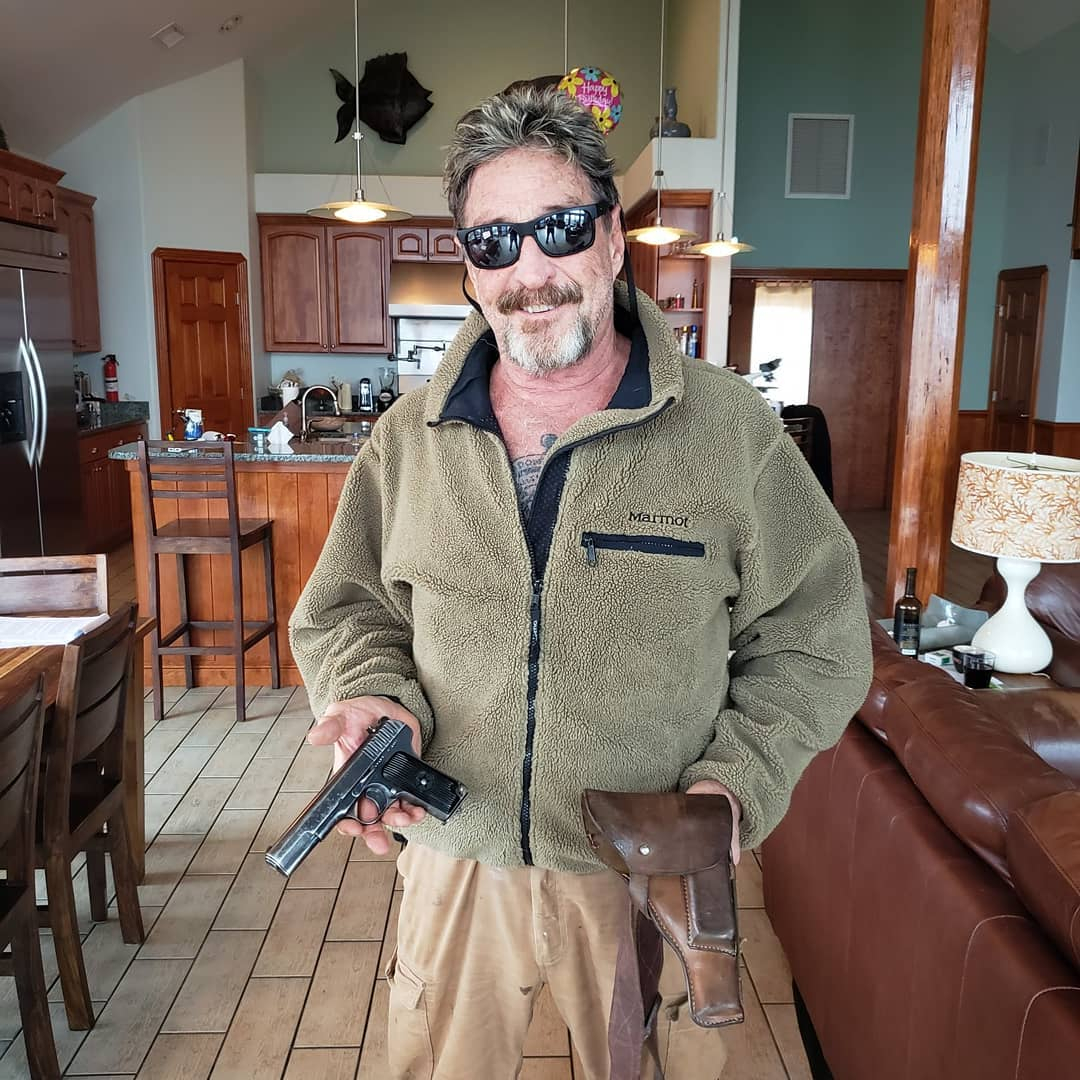 The fugitive antivirus millionaire was constantly trying to avoid the authorities, while publishing details of his supposed whereabouts.

In 2019, a Florida court ordered McAfee to pay $25million to Faull's estate in a wrongful death claim.

The Associated Press interviewed him on July 4, 2019, on his yacht while it was anchored at the Marina Hemingway in Havana, Cuba.

And a few days later, the Sun Online reported that he was arrested for taking weapons and ammunition into the Dominican Republic.

He and five others were suspected of traveling on a yacht carrying high-caliber weapons, ammunition and military-style gear.

However before the month was out, McAfee was released from detention.

Days later, he bizarrely vowed to run against Donald Trump, while claiming to have sought refuge in London and Paris.

Then, McAfee claimed to have fled to an “ultra-secure” facility in Lithuania to evade the CIA.

He even shared his supposed location – which was covered in tin foil – as being in Vilnius in a tweet. 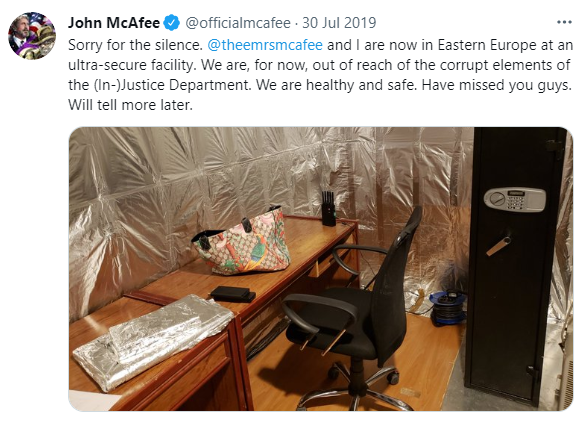 He posted: “Sorry for the silence. @theemrsmcafee and I are now in Eastern Europe at an ultra-secure facility.

“We are, for now, out of reach of the corrupt elements of the (In-)Justice Department. We are healthy and safe. Have missed you guys. Will tell more later.”

In 2020 tweets from McAfee suggested he was in Belarus.

At each location he claimed to be hiding in Europe, McAfee tweeted a time-stamped picture – though it’s possible he could have used a Virtual Private Network (VPN).

A VPN allows users to change the assigned "address" of a computer, laptop or mobile device.

His days of being on the run ended in Spain in October 2020, when he was arrested and indicted for tax evasion. 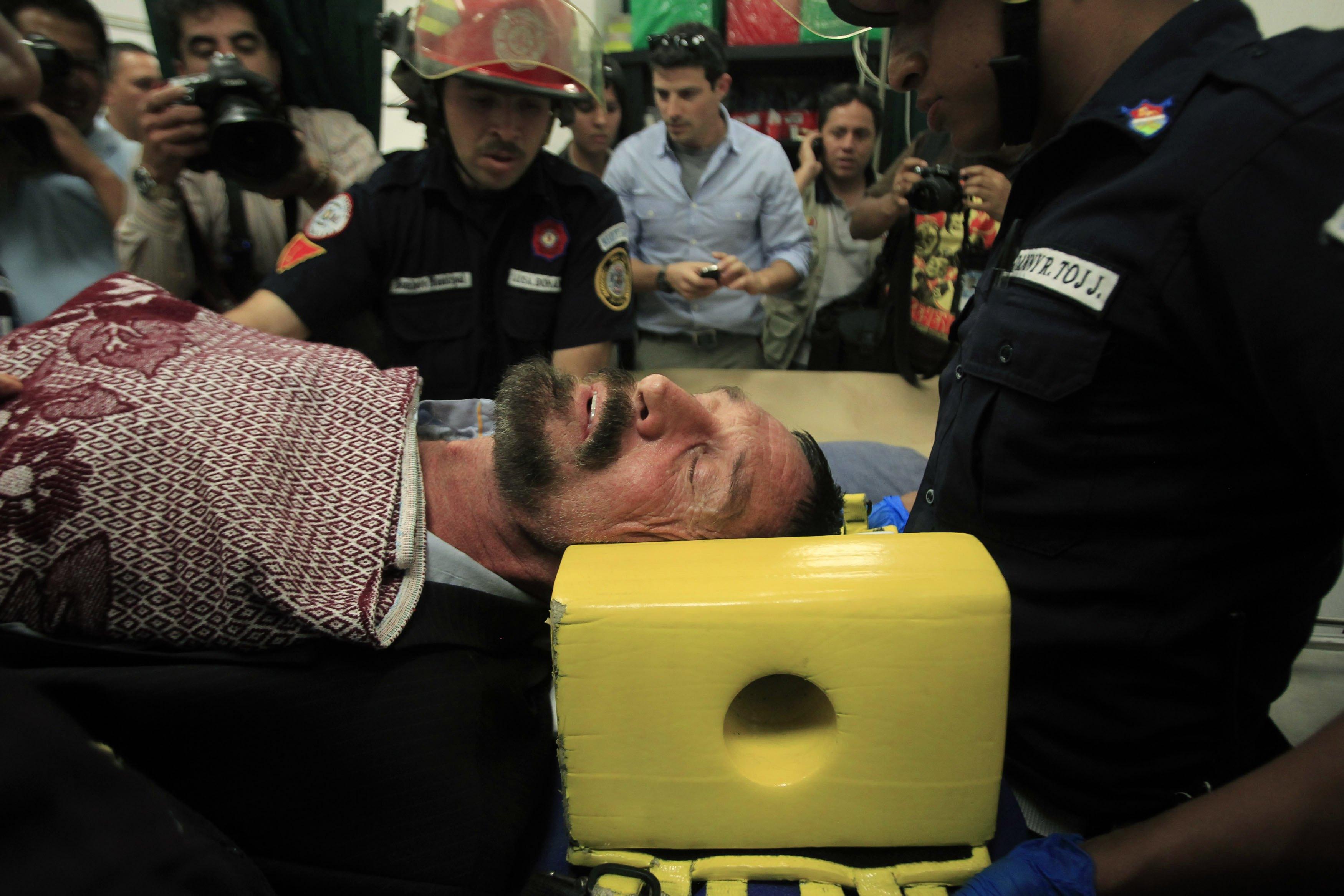 When was John McAfee last arrested?

John McAfee was arrested in October 2020 at Barcelona's international airport.

He had been in jail since then, awaiting the outcome of an extradition proceeding.

His arrest followed charges the same month in Tennessee for evading taxes.

Authorities had alleged that McAfee had failed to report income from promoting cryptocurrencies while he did consulting work, made speaking engagements and sold the rights to his life story for a documentary.

The criminal charges carried a prison sentence of up to 30 years.

Tennessee prosecutors had argued that McAfee owed the US government $4,214,105 in taxes before fines or interest for undeclared income in the five fiscal years from 2014 to 2018, according to a Spanish court document. 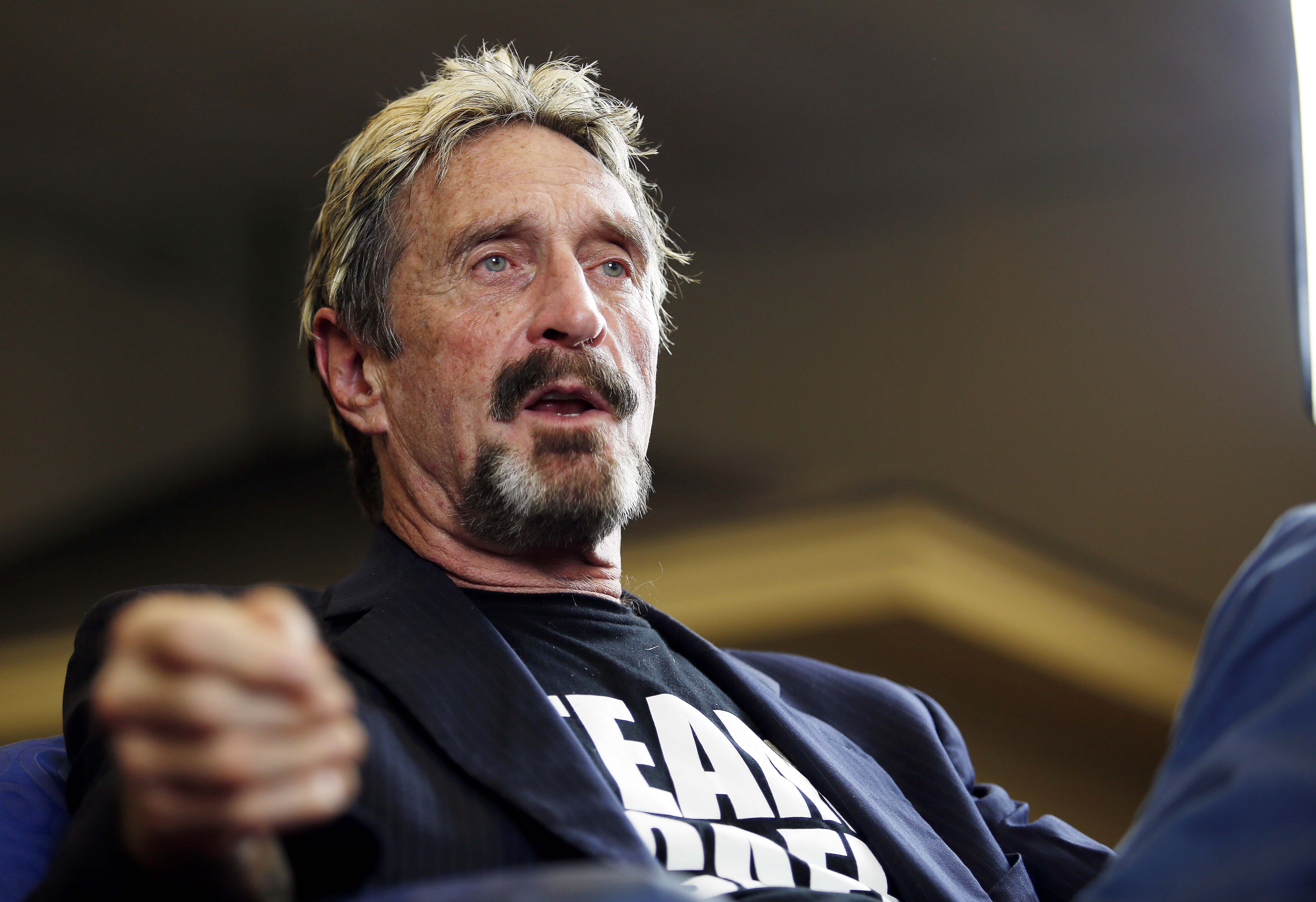 But in a ruling soon before his death, the National Court judge agreed to extradite him to the US to just face charges stemming from 2016 to 2018.

McAfee's body was discovered at the Brian's 2 penitentiary in northeastern Spain.

Nishay Sanan, the Chicago-based attorney defending him on those cases, said by phone that McAfee will always be remembered as a fighter.

"He tried to love this country but the US government made his existence impossible," Sanan said.

"They tried to erase him, but they failed," the attorney added. 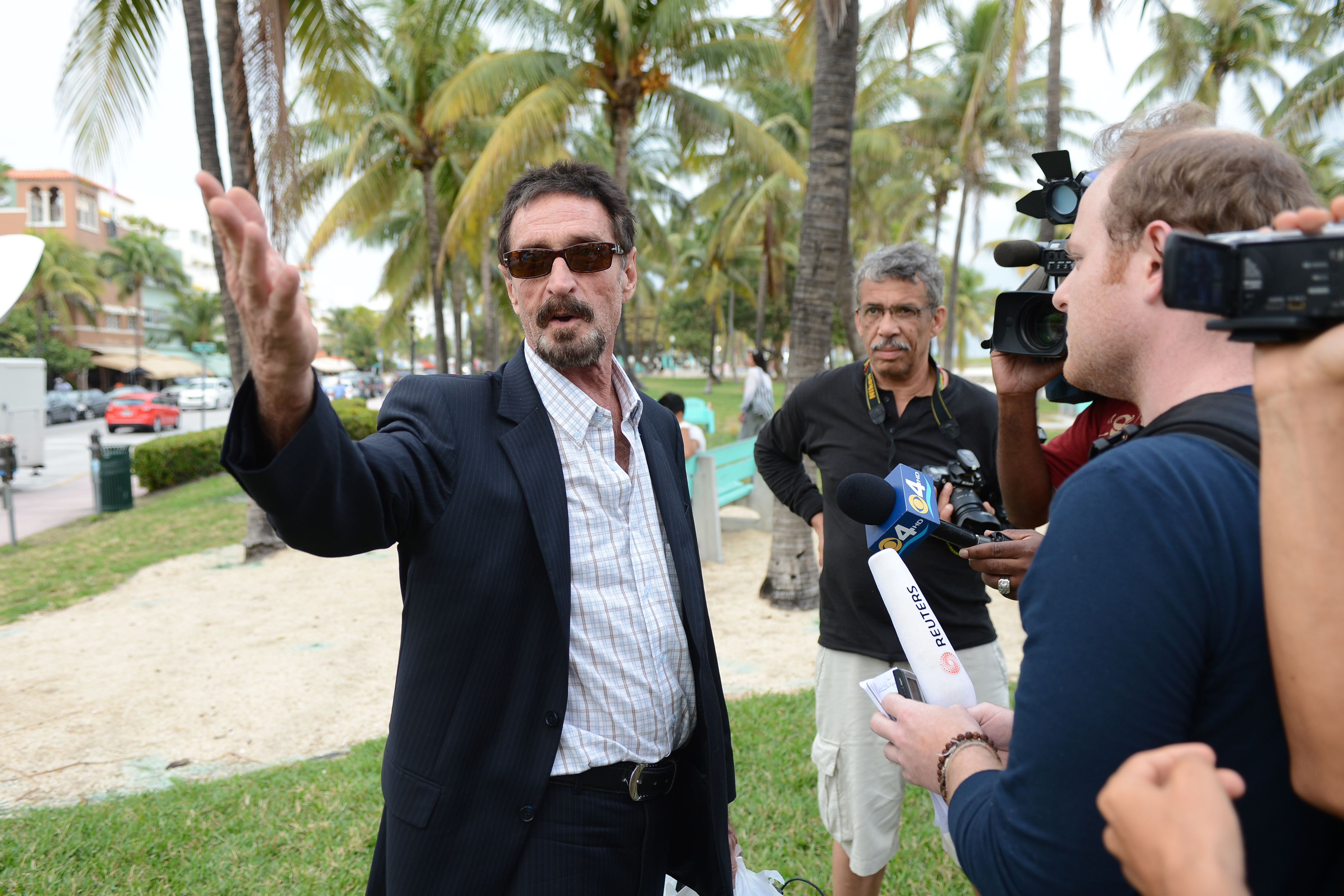 In one of his last known media interviews, with British newspaper The Independent in November 2020, McAfee said his prison experience in Spain was a fascinating adventure and he planned never to return to America.

He said: "I am constantly amused and sometimes moved. The graffiti alone could fill a thousand-page thriller."

McAfee also said that prisoners and guards had recognized him and some had even asked for his autograph.

A spokesperson with the US Embassy in Madrid said it was aware of the reports about McAfee's death but would not comment for privacy reasons.