Perth’s rental market has become so tight landlords are able to choose only their ideal tenants, with low-income families who have children often missing out on urgently needed housing.

A survey by Anglicare WA shows the number of available rental properties for low-income families dropped by 50 per cent over the past 12 months, with the market becoming so tight that landlords can pick and choose who they want living in their properties. 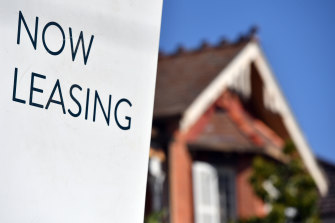 Only ‘ideal’ tenants are being picked by landlors, a charity boss has warned.Credit:Sam Mooy

He told 6PR Mornings he expected the availability of rental properties to become much worse in coming months with the end of the rental moratorium.

“Are we looking down the barrel of having child bonds, where we normally have pet bonds? It really is a terrible situation,” he told 6PR’s Liam Bartlett.

“The families we see – families that are out of work or on low incomes – are really priced out of the market anyway … and if you’re not the ideal tenant, you just don’t get in.”

Mr Glasson said more than 900 people rang Anglicare WA for emergency assistance last month, after cuts to JobSeeker payments and the removal of all other assistance rolled out during the pandemic.

“The amazing thing here is that when we were in the middle of the coronavirus crisis and we got those supplements … we saw the levels of demand for some of their services actually fall; we saw the benefit of giving people an adequate income,” he said.

“Now, as that’s wound back, demand for emergency assistance has just gone through the roof. We’re in real strife as a community.”

Perth’s house prices returning to boom-time levels spelled disaster for poorer residents, with Mr Glasson saying he was already seeing parents signing leases for 70 to 80 per cent of their income.

“A lot of people we see are really good financial managers because they have to get by on nothing.”

House prices are expected to exceed 2014 boom levels if the 9.2 per cent growth of the past four quarters continues until the end of the year, according to Domain’s latest house price report.

Perth house prices grew 2.4 per cent in this year’s March quarter, while units rose 3.9 per cent.

Ironically, Perth’s mortgage affordability, since its property market has been through a five-year slump, is helping drive up prices on the back of interstate and overseas workers relocating to Western Australia, along with nationally low interest rates and government stimulus packages.

“Perth house prices have now reached the highest point in just over five years and unit prices the highest in almost three years, at $578,612 and $371,445 respectively,” the Domain report said.

“It is clear Perth’s housing market has moved into another price cycle, now roughly one year into a recovery following a five-year downturn.

“This uninterrupted run of price growth has not occurred since 2013 in the lead-up to the previous price peak reached in 2014.”

And the boom risks pushing home ownership even further out of reach for many.

CoreLogic provided more conservative figures across Perth’s entire housing market of 6.2 per cent growth over 12 months (averaging out houses and units), with predictions of a possible passing of the peak.

CoreLogic research director Tim Lawless said there were early signs the breathless exuberance in the national housing market may be peaking.

“This isn’t to say housing values are about to reverse; a more likely scenario is the market is moving through a peak rate of growth and the pace of capital gains will gradually taper over coming months,” he said.

Catch all the day’s headlines

At the end of each day, we’ll send you the most important breaking news headlines. Sign up here.