‘Coronavirus SAVED my life!’: Asthma-sufferer, 36, learns she has fatal heart condition and could have ‘dropped dead’ at any moment after discovery by intensive care Covid medics

A 36-year-old woman has credited the coronavirus with saving her life after Covid doctors discovered she had an undiagnosed heart condition.

Angela Schlegel, from West London, was taken to Chelsea and Westminster Hospital on 22 March, after 11 days of coronavirus symptoms, where scans showed fluid around her lungs and heart.

She was transferred to intensive care at London’s Royal Brompton Hospital. She was  later diagnosed with the potentially fatal eosinophilic granulomatosis with polyangiitis (EGPA). 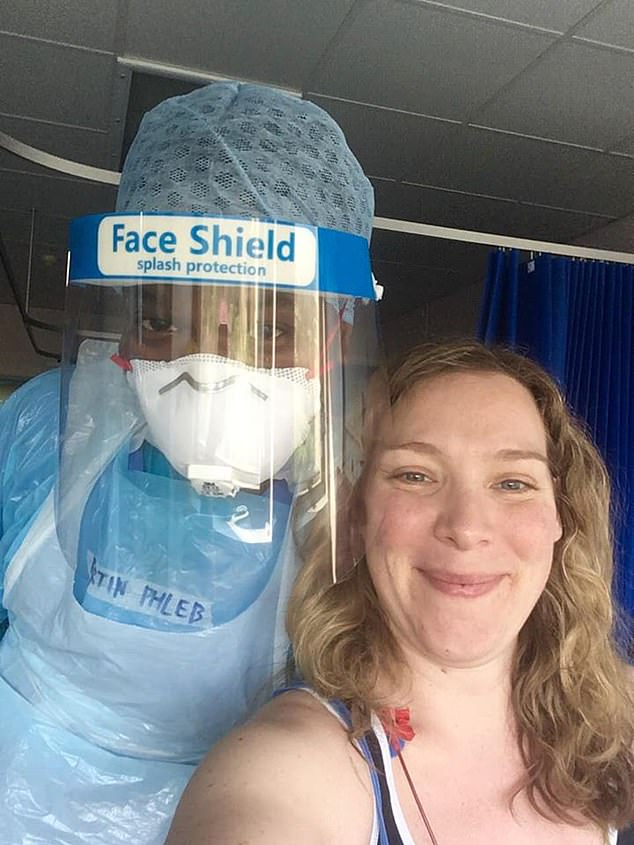 Angela Schlegel with nurse Fomeh who’s a phlebotomist (takes blood). She was diagnosed with the potentially fatal eosinophilic granulomatosis with polyangiitis (EGPA) while receiving treatment for coronavirus

Ms Schlegel, who is a Learning and Development Manager at The Natural History Museum, said she had been seeing her doctor for the past two years for asthma but had no idea she had a heart condition.

‘They told me some news that I really wasn’t expecting that I had a rare autoimmune disease, and that it had really badly affected my heart,’ she told BBC Breakfast yesterday.

‘It just blew my mind as I was told my heart was not functioning the way it should be. If the EGPA was left undiagnosed I could have just dropped dead,’ she said. 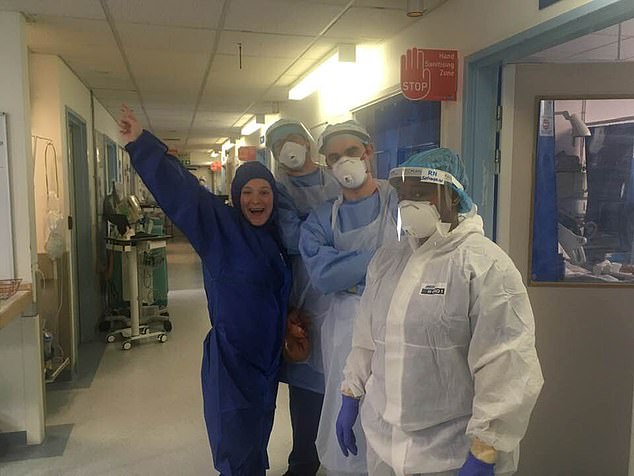 ‘It saved my life in the long term, but in the short term coronavirus did nearly kill me,’ she added, as the virus put her heart under extra stress.

Eosinophilic granulomatosis with polyangiitis (EGPA) is a condition that can damage various organ systems in the body including the heart, joints, lungs, and nerves.

Ms Schlegel ended up spending five weeks in hospital and paid tribute to the staff who treated her.

Dr Pugan Patel, a consultant who treated Ms Schlegel, told BBC Breakfast that watching her recover had a ‘huge impact’ on staff morale.

He added her autoimmune condition is ‘quite a severe condition, especially when the heart is involved.’

Usually a person’s heart functions at around 50 or 60 per cent he added but when Miss Schlegel was transferred to hospital, hers was only working at around ten per cent. 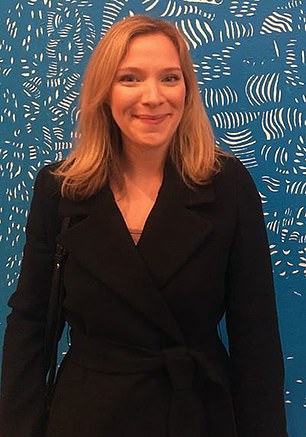 Ms Schlegel’s recovery comes as an urgent review has been launched into whether obesity, ethnicity and gender raise the risk of death from coronavirus.

Matt Hancock has ordered health officials to trawl through the records of thousands of pandemic victims.

The Health Secretary said it was too early to confirm that weight was a factor but ‘data from around the world’ was suggesting a link.

Researchers at the University of Liverpool warned last week that obesity increased the risk of dying from the virus by 37 per cent.

Around three in ten adults in England are clinically obese – with a Body Mass Index above 30 – a rate among the highest in the Western world.

And Britain’s virus death toll, which rose yesterday to 28,734, is second only to Italy’s among European nations. Scientists believe obese patients are more at risk of serious complications because their immune systems are worn out after repairing cells damaged by excess fat.

Mr Hancock said: ‘Our knowledge about this virus grows daily and it appears some groups are more affected than others.

‘Emerging data from around the world suggests there could possibly be a relationship between obesity and the impact of Covid-19 on individuals.

‘It’s too early to say if obesity in itself is a factor or conditions associated with it – or there is not enough data yet to rule it out – so we need to approach any assumptions with caution.

‘Every death from this virus is a tragedy and behind each statistic is a name, a loss and a family that will never be the same again.’

Formerly known as  Churg-Strauss Syndrome, EGPA is a disorder characterised by blood vessel inflammation. This inflammation can restrict blood flow to vital organs and tissues, sometimes permanently damaging them.

Asthma is the most common sign of Churg-Strauss syndrome, but the disorder can cause a variety of problems, ranging from hay fever, rash and gastrointestinal bleeding to severe pain and numbness in the hands and feet.

The wide range of signs and symptoms and their similarity to those of other disorders makes Churg-Strauss syndrome challenging to diagnose.

The condition is rare and has no cure. But the symptoms can usually be controlled with steroids and drugs that suppress the immune system.